The brutal noir of Michael Winterbottom's "The Killer Inside Me," and other highlights from the 2010 Berlinale 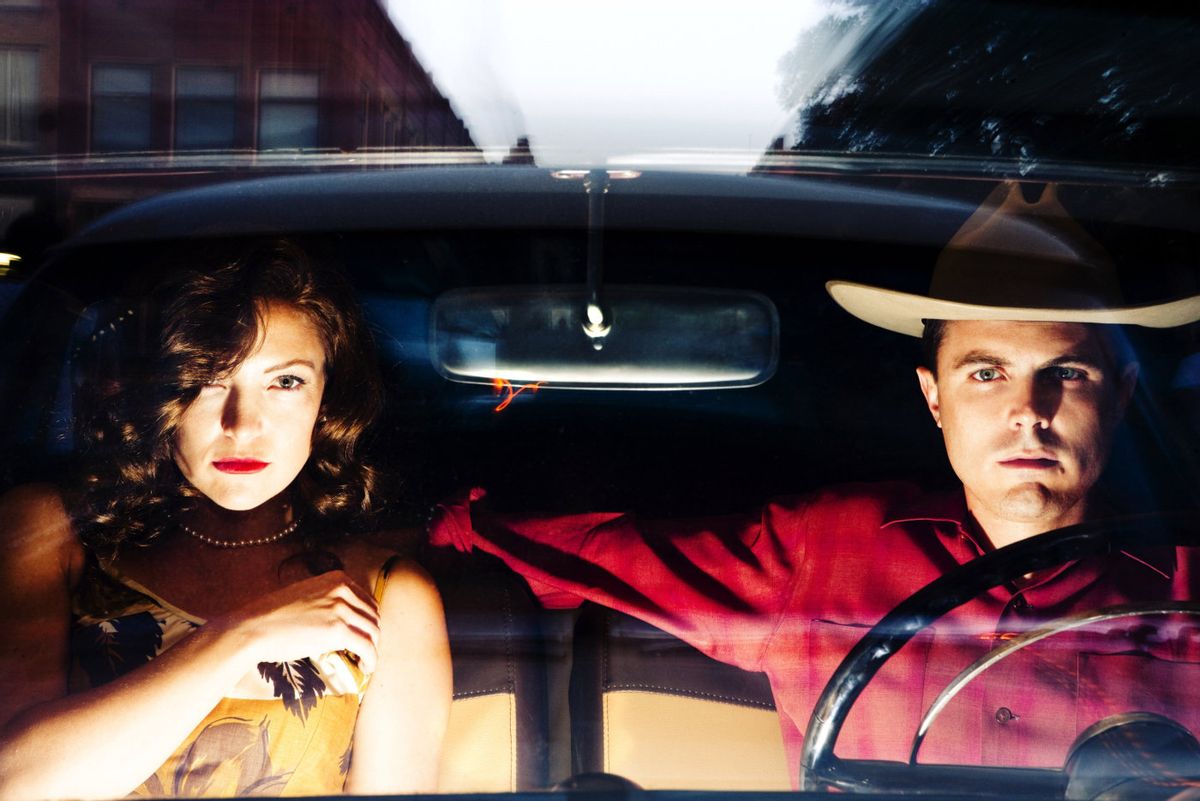 Kate Hudson and Casey Affleck in "The Killer Inside Me"
--

I've been brought to Berlin to participate in the Berlinale Talent Campus, a program that brings in young filmmakers, screenwriters, composers, editors and even film critics from around the world for a week of workshops and, of course, moviegoing. During this past week, one subject that's come up repeatedly with my colleagues and with the young professionals who have gathered here is the importance of having a life outside the movies. And still, the other day when I looked at my schedule and realized if I skipped a movie or two I'd actually have time to go to a museum, I hesitated. In two days' time, the whole event would be over, and I'd feel the usual post-festival remorse about all the movies I hadn't seen. Shouldn't I really be checking out that Iceland-Hong Kong-Turkey co-production about the peasant boy who travels to the city and becomes a huge pop star, only to realize how desperately he misses his mother's goat-eyeball stew back home?

In the end I said no to that (nonexistent, by the way) movie and instead got myself out to the recently opened Neues Museum, on Berlin's "Museum Island" (or Museumsinsel), a large cluster of grand museums and galleries instituted in the mid-19th century to honor the arts and sciences. The Neues Museum is not exactly neue: Originally a magnificent neoclassical structure (it was built in the 1850s), it was heavily damaged by Allied bombs and lay in semi-ruins for decades. Attempts to reconstruct it over the years, including one by the East German government in the years before the Wall came down, crumbled away to nothing. But under the guidance of English architect David Chipperfield the building, reconstructed and reimagined after 11 years of planning and building, was reopened last October.

The project was somewhat controversial in Berlin: One contingent wanted the building to be restored to its former glory, as if bombs had never touched it. But Chipperfields' design is far more in tune with Berlin's anxious conscience, its sense of duty in remembering its not-so-distant past without whitewashing its uglier and more painful aspects. The result is a glorious building in which the new gives way to the old, and vice-versa. In a New York Times piece last year, Michael Kimmelman described it as "a modern building that inhabits the ghost of an old one." The "new" building houses, as the old one did for so many years, a selection of antiquities including some extremely fine Roman statuary, cases full of forged-metal Viking diddly-doos and Egyptian relics that look so crisp and pristine they might have been carved yesterday.

What does an afternoon spent at the Neues Museum have to do with movies? I'll get to that. In the meantime I could spend a lot of time telling you about the flawed but interesting Bosnian film "Na Putu" ("On the Path"), in which a young Muslim woman realizes she's losing her boyfriend to religious extremism. (I've heard some people here decry the film for its failure to depict Islam in a fair light, though I think what the director, Jasmila Zbanic -- who won Berlin's Golden Bear in 2006 for "Grbavica" -- has really made, whether she realizes it or not, is more a horror film than a treatise on the nuances of religious beliefs: It's "Invasion of the Bodysnatchers" with burqas.) Or I could outline the numerous flaws of Rafi Pitts' parched, minimalist exercise "Shekarchi" ("The Hunter"), a fictional drama about an Iranian man who resorts to violence after his wife and daughter are caught in a crossfire between police and protestors in the run-up to the 2009 election in Iran.

Instead, I'd rather focus on a picture that a greater number of people will actually have a chance at seeing, one that premiered at Sundance and has been picked up for distribution by IFC. Michael Winterbottom's "The Killer Inside Me" is an adaptation of Jim Thompson's grim 1952 noir classic, and so when I heard that it had provoked some outrage in Utah -- specifically over two scenes in which characters played by Jessica Alba and Kate Hudson are brutally beaten by Casey Affleck's psychotic Texas sheriff -- I knew I had to wait and see for myself before I could parse the controversy. I'm not sure it would be admirable to mount a Thompson adaptation in which the violence is kept tasteful; sometimes brutality is simply what's needed.

"The Killer Inside Me" is, at least to a certain point, extremely well-crafted. Shot by Marcel Zyskind (who has worked frequently with Winterbottom), it has a deceptively bright, decidedly un-noirish look: Its colorful vibrancy only adds to the aura of dread Winterbottom builds here. The performances are solid: Affleck, an actor I've never much cared for, uses that watery-decaf voice of his to great effect -- he's coolly, breezily unnerving. And Alba is both gloriously sensual and deeply touching, a distinctly human presence in a world gone wrong: Winterbottom seems to recognize that, and it's safe to allow that his intention is to make us feel the full weight of the horrors that befall her.

Intentions are grand things to have. But my assessment of Winterbottom's choices here -- which I've had to make, under deadline pressure, just a few hours after watching Alba's face being beaten into what one character describes as "stewed meat, hamburger" -- is that he's gone too far. Those of you who find bliss in remaining ignorant of every plot detail until you've seen a movie should stop reading here, although those of you who are particularly sensitive to movie violence might want to know what you're in for if you venture into the unsettling, wormy tunnel that is "The Killer Inside Me."

When I say that Winterbottom shows Affleck's Sheriff Lou Ford beating Alba's Joyce Lakeland in the face repeatedly, with closed fists, I don't mean that he shows one blow and then cuts away, filling in the blanks with sound effects. And when I say that he shows her face, before, during and after the beating, I'm not indicating a few quick shots to give us an idea of the pain she's suffering. The nutso sheriff throws perhaps some 20 punches; we see about six or seven of them land. (I'd have to see the movie again to give you an actual count, and that's not something I'm looking forward to.) We see Joyce's face, in lingering shots, at various stages of the beating. By the end, her head is lolling on her shoulders, and her face -- which Winterbottom again shows us in shots lasting more than just a few seconds -- is nearly unrecognizable. The point here isn't that Winterbottom is courting sicko moviegoers who might get their jollies from a sequence like this (and a later one in which Kate Hudson gets a less horrific, but no less disturbing, beating). I'm not out to make the "People will get off on this! Sound the alarm!" clarion call. The movies don't exist to police the behavior of the masses, and they can't be tailored to the tastes of those who might potentially misread them.

But Winterbottom -- a director whose work I greatly like and respect -- has made a calculated misstep here. The camera has no conscience: You can point it at anything, and it doesn't know by itself when to stop looking. Someone needs to tell it when to look away. A filmmaker has to find that point, even if he's depicting unconscionable violence and cruelty, where "enough" jumps over the line to "too much." Winterbottom sails past that point without giving us enough in return. There's something irresponsible, almost arrogant, in the way he puts his craft above his character's suffering.

But the scene with Alba isn't the one that really tips Winterbottom's hand. I've mentioned that later in the movie, Casey's Ford also beats Hudson's character. Yet, strangely but somewhat tellingly, her fate is barely mentioned by any of the characters, nor is it alluded to, even in some subtle way, by the filmmaking. After Hudson's character serves her purpose, she's dropped -- the subtext is that she's not as integral to the plot, or to the movie's upcoming climax, as Alba's character is, so what's the point? The last time we see her, she's lying unconscious on a kitchen floor in a puddle of her own urine. I'm still wondering what happened to her after that. Why does Winterbottom think it's not important to tell us?

"The Killer Inside Me" isn't a piece of junk; Winterbottom is a director who cares deeply about the quality of what he puts in front of us. But that doesn't mean he's above lapses in judgment. As well-made as "The Killer Inside Me" may be, it neither honors nor builds on the noir tradition. Its wayward violence, and not its twisted, melancholy soul, is what it's likely to be remembered for. To conjure an image from "The Big Heat": Winterbottom is so hung up on the scalding-hot coffee, he's lost sight of Gloria Grahame.

This is my last day in Berlin, and as I write this, propped up before me is a postcard of one of the most beautiful works of art in the word. The bust of Queen Nefertiti -- supposedly made around 1340 BC by a royal Egyptian sculptor known as Thutmose -- is a delicately colored little figure whose effect is almost mystical, and it's one of the treasures of the Neues Museum. Nefertiti has her own little room there, and in the time I spent with her, I shared space with a considerable crowd that had gathered around her protective glass case. The queen's gaze -- not imperious, though certainly assertive -- had pretty much intoxicated us all. I hated to leave her, but eventually, I had to. And though I thought she might reemerge later in my dreams, I saw her even sooner than that: Her image popped up in the very next movie I saw, "Rompecabezas" ("Puzzle"), a sweet but extremely dopey film by Argentine director Natalia Smirnoff about a married housewife and mother who, just as she turns 50, discovers her love of jigsaw puzzles. The movie is about as exciting as I've made it sound, but what astonished me is that the first puzzle the heroine assembles is an image of Nefertiti adapted from the very same work of art -- or witchcraft -- that I'd been looking at not two hours earlier. Nefertiti had followed me into the movie theater, not just from the outside world, but from more than 3,000 years in the past.

There has been some recent debate about Nefertiti's true age: A Swiss art historian has charged that she may have been made many years later -- specifically, in the early part of the 20th century. But even if that's true, then Nefertiti -- a figure of unquestionable star quality, regardless -- is still only slightly younger than the movies themselves are, and I'm glad I saw her in person. Unlike most celebrity sightings, she didn't disappoint. And she reminded me that you sometimes need to step outside of movies in order to find your way into them.