Sticking to the teleprompter script

Would anyone but a brainwashed-Maoist-Muslim-idiot-secret-genius need a teleprompter? 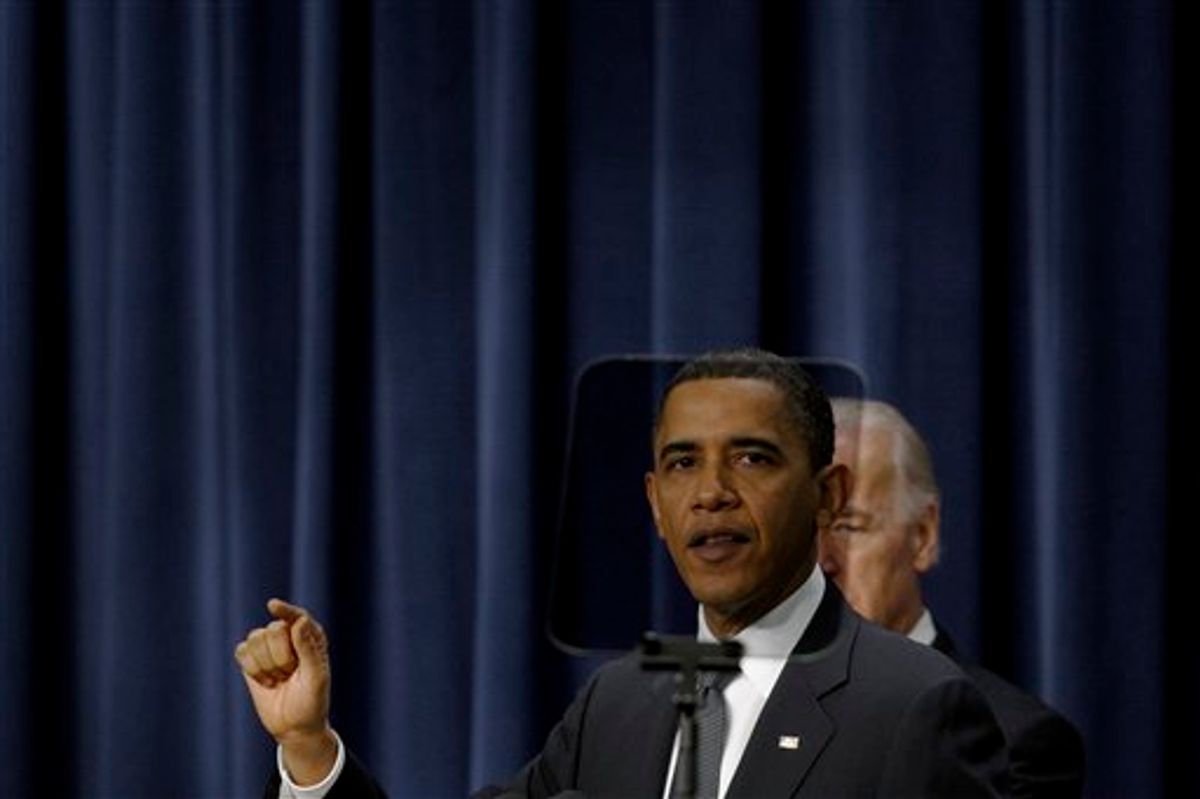 President Barack Obama, accompanied by Vice President Joe Biden, is seen through a teleprompter as he delivers remarks on the economy on the one year anniversary of the signing of the Recovery Act, Wednesday, Feb. 17, 2010, in the South Court Auditorium in the Old Executive Office Building on the White House campus in Washington. (AP Photo/Pablo Martinez Monsivais) (AP)
--

It is, believe it or not, possible to sympathize with some of the grievances aired at CPAC, even without agreeing with them. But not when it comes to the right's seemingly universal conservative hatred of teleprompters.

At least four prominent Republicans yesterday took swipes at the president for his frequent use of teleprompters. Actor Stephen Baldwin (as in, not Alec) and longtime conservative activist (and technically, CPAC host) David Keene both made their teleprompter cracks, almost dutifully. Added Sen. Jim DeMint, R-S.C., "I think we've confirmed you can't govern from a teleprompter." The star of the day, Florida Senate candidate Marco Rubio, joked of the snowstorm that buried Washington, "And the president couldn’t find anywhere to set up a teleprompter to announce new taxes."

Of course, Rubio, DeMint, Keene and Baldwin were all, themselves, standing in front of teleprompters. At least Dick Armey, former congressman and current Tea Party agitator, took note of the shiny things in front of his face, even as he ploughed right through to his joke. Said Armey, "By the way, what are these things? I always thought if you knew what you were talking about and had something in your heart to say, you didn’t need them."

Too bad CPAC isn’t like the United Nations, with translators on hand to make foreign messages intelligible. What’s the rap on President Obama even supposed to be here? I’m able to make out a couple possible interpretations.

1.  Obama with all his slick, teleprompted rhetoric, is pulling a fast one on the American people. This is the theory Adam Nagourney goes with, writing at the New York Times’ Caucus blog,

Mr. Obama, of course, has shown that he is plenty adept at speaking with or without a teleprompter, but the ribbing speaks to a bigger point: Many conservatives here believe that Mr. Obama used his speaking abilities to sneak a big-government agenda on to a public that is in fact not really supportive of his view of the role of government.

This seems to be what Armey was saying in his comment -- "If you knew what you were talking about and had something in your heart to say..." So it’s not just that the president needs teleprompters to sell the public on his otherwise unpalatable ideas. The gist here, long a favorite on the right, is that Obama is some kind of Marxist at heart, and without the nagging of his speechwriter-minders placed right in front of his face, he would start railing about how it's time to expropriate the expropriators.

But can that really be it? Do conservatives actually think that the president is sneaking an agenda past the electorate by addressing them in public? Wouldn’t it be much sneakier to never talk to reporters or give speeches?

2. Obama is actually an idiot who couldn’t convince anyone of anything without his speechwriters. Jon Chait at the New Republic takes up this argument, pointing to a wealth of examples in the right-wing blogosphere. As he points out, the idea of the president as "mindless drone" has somehow survived the bruising he gave the House Republicans last month, as well as the presidential debates.

This idea obviously has a certain amount of currency. There is a segment on the right, after all, that refuses to believe that Obama could possibly have written his own books. (Or, indeed, that he didn’t even go to the colleges he says that he went to.) Nor, of course, is it that hard to guess at the nasty origins of such disbelief about the president’s intelligence.

Now, it’s not obvious exactly how conservatives have decided that off-the-cuff speaking ability is to be prized over all else. The standard doesn’t seem to apply, after all, to Sarah Palin, or for that matter, George W. Bush.

But at their core, these ideas about the president and teleprompters are two heads of the same hydra that we’ve now seen all over the American right-wing: the idea that the president is a Manchurian candidate of some kind. It shows up in the birther arguments of course, and in the idea that ACORN stole the election. It's there in the fear that the president is a secret Muslim, or the co-conspirator of all kinds of radical wackjobs. Even the recent mini-fracas about how Obama put his feet on the Oval Office desk is indicative of this. Refute one paranoid theory about the president, of course, and you just see three more come at you. When one thing Orly Taitz says is proven false, she just jumps to the next idea.

At the core of this is a simple refusal to believe that this president could possibly be legitimate, even when he does exactly the same things that his predecessors did (or that all politicians do). The prevalence of teleprompter jokes at CPAC is one small mark of the penetration into the mainstream of hydra-headed conspiracism about Obama.