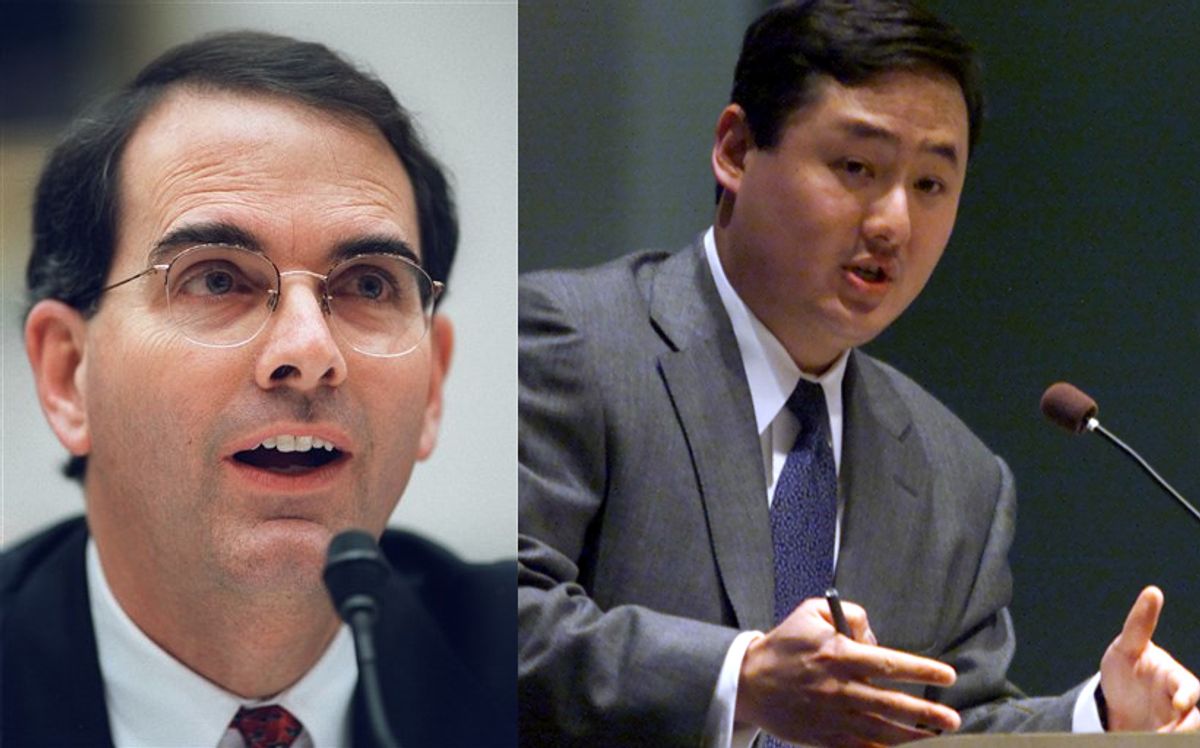 After a very long wait, a report from the Department of Justice's Office of Professional Responsibility about the conduct of torture memo authors Jay Bybee and John Yoo was released Friday. It was already all but certain that the men would not face criminal charges for their actions during the Bush administration; now it seems that -- despite the report's recommendation -- they'll also escape any professional sanctions.

In the report, which was actually completed in July of 2009, the OPR concludes that Bybee and Yoo were guilty of professional misconduct, and that they should face disciplinary action by their respective state bars. But in a memo written to Attorney General Eric Holder, Associate Deputy Attorney General David Margolis says he's overruling that decision, and "will not authorize OPR to refer its findings to the state bar disciplinary authorities in the jurisdictions where Yoo and Bybee are licensed."

That doesn't mean Margolis is excusing what Bybee and Yoo did; he repeatedly criticizes their memos. But, he says, they didn't violate any specific professional standards and are thus not guilty of professional misconduct.

In explaining his decision, Margolis writes, "This decision should not be viewed as an endorsement of the legal work that underlies [the torture memos]. However, OPR's own analytical framework defines 'professional misconduct' such that a finding of misconduct depends on application of a known, unambiguous obligation or standard to the attorney's conduct .... [A]s all that glitters is not gold, all flaws do not constitute professional misconduct."

The final report and Margolis' memo are both available for download in PDF form on the House Judiciary Committee's Web site, along with drafts of the OPR reports and responses from Bybee and Yoo to those drafts.

Update: A little background on Margolis: He's a career attorney -- that is, not a political appointee -- who's been at the DOJ for decades and seems to be pretty universally respected. From a Legal Times profile of him:

Margolis [is] one of the Justice Department’s most respected officials, a lawyer with a sterling reputation earned over 42 years of service at the department. "Taking him on is a losing battle," says the source. "The guy is Yoda. Nobody fucks with the guy."

In many ways, comparing the 66-year-old Margolis to the quirky and ancient Jedi Master is apt. Margolis is widely described as the "institutional knowledge" of the Justice Department. A notorious straight shooter known more for his love of country music and outlaw garb than his politics, he’s managed to navigate the shifting sands of Washington to retain a powerful voice under Attorney Generals Janet Reno, John Ashcroft, and now Alberto Gonzales. Though Margolis is technically outranked by more than a dozen political appointees at DOJ headquarters and all 94 U.S. attorneys scattered throughout the country, his influence on the department extends far beyond his title, say both current and former Justice officials.