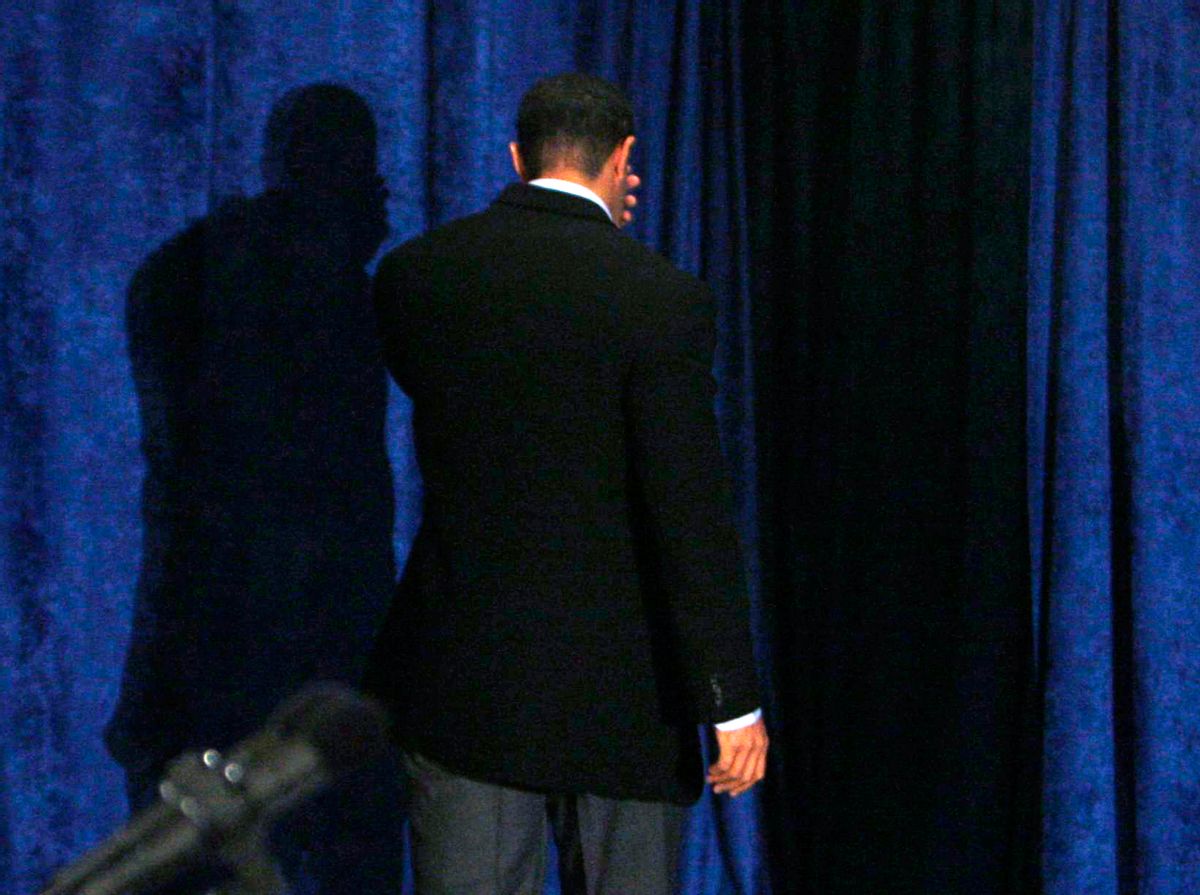 The pre-apology hype inundated the sports networks. Even in the wee hours -- the Lonely Guy TV block of overnight "SportsCenter" repeats swollen with penis enlargement ads, Tiger taming ruled. ESPN gravely warned: "The media's appetite to learn more is not going to be exhausted." Strange the megacorp thinks itself an observer of, not a participant in, this circus. This is a shaming that everyone's a little ashamed to be a party to.

Deep into the night "SportsCenter" aired a brooding "Behind the Music"-style retrospective that blamed Tiger Woods for pretending to be a "model of propriety." Who knew that hawking razors (the kind that get you laid, if the woman ever stops fondling your face) made Tiger's adultery hypocritical? What was Woods preaching and was the green jacket part of Eldrick's ridiculous evangelical get-up?

This is the apotheosis of Sports Kabuki, a subconscious dance that keeps the good ol' American way from morphing into a Norman Rockwell painting of a man having sex with his Thanksgiving turkey. Once their humanity is discovered, athletes are shamed into a cringing renouncement of who they are, so we don't have to think about who we are. The folks at ESPN could be squeezing Woods because he's a driving, chipping, putting reminder of scandals at their own debauched network.

So hand Tiger his scarlet golf bag. Let's see him bow and scrape before unleashing that impeccable swing. He must be punished for making us briefly glance at our own icky sexual proclivities. It's hard to keep track of what's even going on as Skip Bayless sputters hot spittle into our ears, but here's the process:

Someone who probably isn't sorry is apologizing for a harmless act he shouldn't be sorry about to media types who shouldn't be demanding an apology in order to placate corporations that only care about superficially responding to apology demands.

While the media pretends to be angry when we're really just titillated and seeking to justify the rabid hounding by pretending he lied to us.

And face it: This particular Maoist self-criticism is entertaining. Yes, it's all our faults, a thousand apologies. May we burn in hell for wringing hands over a road-bound billionaire having extramarital sex. (What did we think Tiger did when he caroused with Michael Jordan and Charles Barkley?) It's hard not to rubberneck when a story this silly becomes this big.

Our interest, ESPN's obsession: It's dumb, but permissible. What's really galling is how the kabuki act keeps the country mired in false conversations. Smart people would dismiss the media discussion surrounding Tiger's temptresses as yet another instance of Americans becoming fatuous. There's truth to that, but we should also pay attention to how the process reveals our Puritanical method of solidifying social "norms." Tiger's "Clinton treatment" says much about who we are.

Ironically, the self-humiliating athletes only fail us when they cave. These "caught" figures could show real bravery by challenging the narrative. Instead, a multimillionaire celebrity dances like Jabba the Hut's got him on a neck chain. And the country's poorer for it. When Michael Phelps chucked his dignity in favor of apologizing for marijuana use, it stifled public conversation on that issue. The easy way out has a chilling effect on the national debate, perpetuating a Salem situation in which those who question drug laws become very, very suspicious.

Smoking weed doesn't equal cheating on your wife. These incidents just happened to get handled in the exact same manner, which should tell you something. They are "moral" failings that we pretend to be angry over, only to have frightened athletes validate our insanity through false apology. Tiger doesn't owe us a complex discussion on fidelity, marriage and tolerance. Still, he's indirectly at fault the next time a decent politician has his career derailed over personal business.

Woods apologized for everything short of apologizing today. No one knows if that satiated ESPN analyst Ricky Reilly's need for Tiger to admit he "let down [his] product endorsers." Maybe that's the most depraved act in this screwed up society: Inconveniencing our owners.