Watch Marvel's green Goliath battle flesh-eating bacteria at the senior prom! Who peed in the punch? 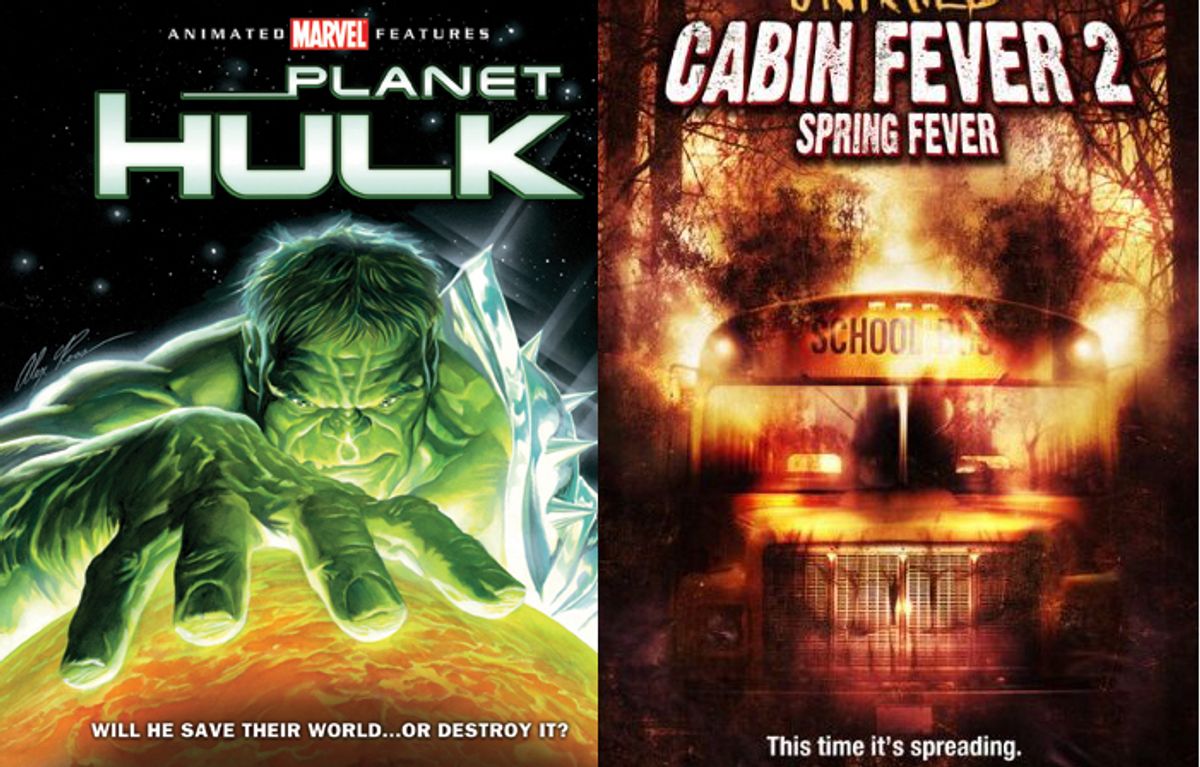 When I first opened the screener of "Planet Hulk," I hoped the 81-minute animated feature would deliver an actual planet full of raging green muscleheads yelling, "Hulk smash!" while perpetually pounding on each other. Barring that, I'd've settled for an adaptation of the Harlan Ellison-scripted "Incredible Hulk" No. 140 (1971) where our favorite gamma-powered brute finds true love on a subatomic world populated by green people, only to have it all ripped away by a bug-eyed alien named Psyklop. That's how far back me and ol' Jade Jaws roll, folks. Instead, "Planet Hulk" is the straight-to-DVD version of a more recent popular run of comics where Hulk fights for his life in some interstellar gladiatorial games, kind of like the Starz Network's "Spartacus: Blood and Sand," but without all the softcore porn.

Looking to shave some money off the Pentagon budget and finally redeploy Gen. "Thunderbolt" Ross off to Afghanistan, Iron Man and his superpowered colleagues blast the Hulk (the voice of Rick Wasserman) off into space. The green-skinned Goliath's ship crash-lands on the planet Sakaar, which is ruled by the tyrannical Red King (Mark Hildreth), whose technology subdues the Hulk where Earth's mightiest heroes have failed. Forced to fight in the arena, Hulk reluctantly bands together with some rebel types, a four-armed insect comic relief and one of those lunar rock men who attempted to capture Thor way back in 1963.

There's some hokum about prophecies that have become part and parcel of these kinds of science-and-sorcery epics ever since "The Matrix," but this works here as well as it does in any "Star Wars" prequel, or even in "Avatar." Of course the Hulk is the chosen one promised to the oppressed of Sakaar by their legends, but he'd rather spend most of the movie looking out for number one, all Han Solo style. Hulk also never reverts to his alter ego, Dr. Bruce Banner, and stays green and surly through the whole movie. All the gladiatorial politics that we've seen since the days of Cecil B. DeMille are also at play, preventing the Red King from killing the Hulk outright because of the monster's popularity in the games.

While the producers of "Planet Hulk" may have passed up Ellison's early-'70s Hulk microverse saga, they still mine the entirety of Marvel's 20th-century output for characters. Beta Ray Bill, a horse-faced alien with the powers of Thor who was popular in the early '80s, shows up in the arena to put a stop to Hulk's winning streak. For completist nerds, Bill's appearance provides one of the unqualified joys of watching "Planet Hulk," but those who haven't spent 35 years of their lives obsessing over all things Marvel can still glean that Bill is a hammer-carrying badass from only a few moments of exposition.

"Planet Hulk" features gladiators dying in pools of blood, people getting turned into warty zombies by creepy-looking mites, and a baby being vaporized by a space bomb, so it's really not for young children. But both older and overgrown kids who can handle its PG-13 rating will find all of the action here promised by a title character who smashes first and almost never asks questions later. The animation is definitely done on a budget, but the character movement is pretty seamless during the many fight scenes.

This is the second Lions Gate "Hulk" release. The first one, titled "Hulk Vs." (as in "versus") came out last year with sports superhero-on-superhero action as Greenskin squares off against Wolverine and Thor in two separate short films. Both of those fight films are as satisfying as "Planet Hulk," for many of the same reasons. One hopes that as Disney completes its merger with Marvel and eventually takes over the production of these things, it will improve the animation while maintaining the attention to Marvel's past that gives "Planet Hulk" an authentic spontaneity that is lacking in so many superhero summer blockbusters. That being said, Lions Gate still has a "Tales of Asgard" disc featuring the adventures of teenage Thor slated for next year.

Maybe I'm the wrong guy to review "Cabin Fever 2: Spring Fever," because I really loathed the first movie. When Peter Jackson raved that the original "Cabin Fever" (2002) was "an unrelenting, gruesomely funny bloodbath," I rushed out to see it, hoping it was the new "Evil Dead" or at least "Re-Animator." Instead, the bio-horror flick joined my ethereal 10-worst list, along with unwatchable crap like "Howling III: The Marsupials" and "Stahttps://cm.mps.beta.salon.com/mps/r Knight," with Harvey Keitel and Klaus Kinski (literally, the worst movie I've ever seen).

It wasn't the gross-out factor that turned me off, mind you. I've been fascinated with skin-rending bacteria ever since I saw a couple of film scratches burrow their way into a beatnik's guts when an unedited print of"The Flesh Eaters" (1964) aired on local TV. But "Cabin Fever's" botched attempts at redneck humor had me wanting to slink out of the multiplex while realizing what a work of genius Troma's "Toxic Avenger" really was. Original "Cabin Fever" director Eli Roth is pretty good at tormenting backpackers in the "Hostel" movies or butchering Nazis onscreen as an actor in "Inglourious Basterds," but he should have stayed away from the Larry the Cable Guy shtick for his seminal gore-fest.

This time around, Roth cedes the director's chair to Ti West, who won a strong notice from Salon's Stephanie Zacharek for his '80s-throwback horror vehicle "The House of the Devil." In "Cabin Fever 2," West handles the mix of humor and carnage more evenly than his predecessor, although the end product is a tad too informed by "Napoleon Dynamite" for my taste. Also along for the ride is Giuseppe Andrews, who reprises his role as the poon-starved fuckwit Deputy Winston. While he just reeks of being one of the director's pals being cast as a mustachioed rube in the first movie, Andrews isn't quite so out of place in the sequel, due to its lighter tone.

For those who missed it, in the first "Cabin Fever," a group of teens head off to the titular cabin in the woods, get infected by a blood-borne disease, and screw like jackrabbits while their flesh falls off. For the sequel, infected water is bottled and distributed to a suburban high school right before prom night. Teens come down with pus-oozing rashes, and their fingernails start peeling off, but they don't bother telling their parents or going to the doctor. No, it's the prom. They're going to get laid.

Just to make sure everyone is infected, a disgruntled janitor urinates blood into the punch bowl. The horned-up teens guzzle the punch despite its tasting like bloody piss. Teens soon start vomiting chunky blood and ruin the prom queen's coronation during one of the film's more sickly funny takes. "Why is everyone looking at her?" the prom queen shrieks while another girl is spewing blood all over the gym. "This is supposed to be my night!" As things go from bad to rancid, mysterious men in biohazard suits show up and start gunning down the diseased prom-goers. Even though their faces remain behind gasmasks, you have to root for these guys because A) the kids at this school are all excruciating, and B) you really don't want these blood-barfing teens running around and infecting everybody.

Despite global-warming deniers, Southwest's throwing fat people off planes, and teabaggers getting all bent out of shape over "Captain America" comics, I still don't hate humanity enough to find the humor in hematologic pathogens -- especially when zombies aren't involved. I might be getting close, but I'm not there yet. However, if you’re the kind of demented freak who's waited your whole life to see bloody dicks and even more blood gushing from between a woman's thighs, then "Cabin Fever 2" comes highly recommended. For me, I'd rather stick to comfort food like "Blood Freak" (1972), the Christian anti-drug movie where evil government marijuana experiments turn a Harley-riding loner into a turkey-headed bloodsucker.