Who's in control in the White House?

If you thought the rogue sensibility went away with the Bushes, think again 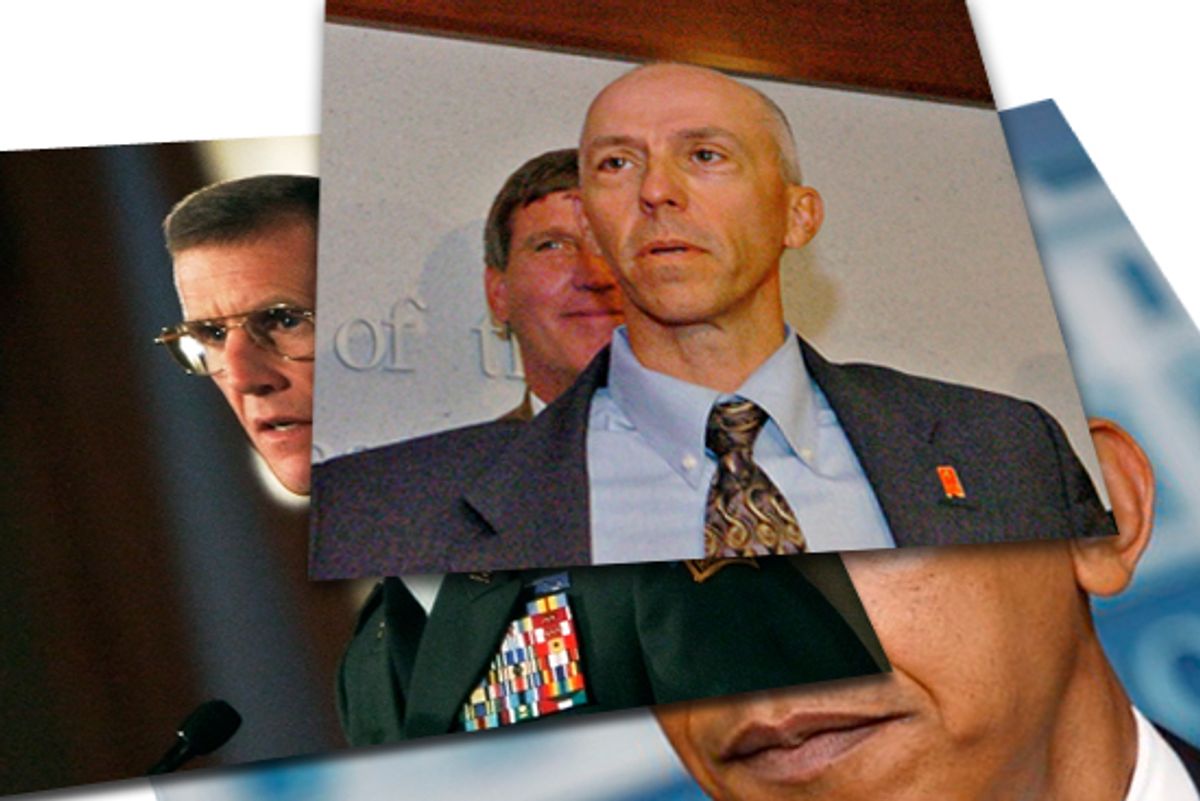 "I am in control here in the White House." -- Secretary of State Alexander Haig, 1981

Ah, the good old days when even a big shot like Gen. Al Haig, who died early Saturday, could get in trouble for such mavericky declarations that defy basic constitutional precedents.

In the 21st century, that's ancient history. We've so idealized cowboy-style rebellion in matters of war and law enforcement that "going Haig" is today honored as "going rogue." Defiance, irreverence, contempt -- these are the moment's most venerated postures, no matter how destructive or lawless.

The Bush administration's illegal wiretapping and torture sessions were the most obvious examples of the rogue sensibility on steroids. But then came McCain-Palin, a presidential ticket predicated almost singularly on the rogue brand. And now, even in the Obama era, that brand pervades.

It began reemerging in September with Gen. Stanley McChrystal's Afghan escalation plan. McChrystal didn't just ask President Obama for more troops -- protocol-wise, that would have been completely appropriate. No, McChrystal went rogue, preemptively leaking his request to the media, then delivering a public address telling Obama to immediately follow his orders.

Incredibly, few politicians or pundits raised objections to McChrystal's behavior. Worse, rather than firing McChrystal, Obama meekly agreed to his demands, letting Americans know that when it comes to foreign policy, the rogue general -- not the popularly elected president -- is in control in the White House.

Of course, while McChrystal's insubordination was extra-constitutional in spirit, he at least made the effort to obtain the commander-in-chief's rubber-stamp approval. The same cannot be said for the rogues inside Obama's Drug Enforcement Agency (DEA).

Recall that one year ago, Obama instructed the DEA to follow his campaign pledge and respect local statutes legalizing medicinal marijuana. When the DEA kept raiding pot dispensaries in states that had passed such laws, Attorney General Eric Holder reiterated the cease and desist decree, stating that "What (Obama) said during the campaign is now American policy."

As even more raids nonetheless continued, the Justice Department then issued an explicit memo ordering federal agents to refrain from prosecuting those who are in "compliance with existing state laws providing for the medical use of marijuana."

And yet the DEA has recently intensified its crackdown. Here in Colorado -- where voters enshrined medical marijuana's legality in our state constitution -- the feds not only raided two dispensaries, but did so in a way that deliberately humiliated their superiors.

In January, the DEA stormed a company that performs cannabis quality tests. The firm’s alleged infraction? Following protocol and formally applying for a federal equipment license. DEA rogues responded to the request not with thanks or -- heaven forbid -- approval, but instead with the gestapo.

This was topped last week when DEA agents arrested a medical marijuana grower who dared discuss his business with a local news outlet. Sensing a P.R. opportunity, DEA agent Jeffrey Sweetin used the spectacle to insist that he will not listen to stand-down directives from his bosses.

"The time is coming when we go into a dispensary, we find out what their profit is, we seize the building and we arrest everybody," Sweetin menacingly intoned.

Once again, a rogue going wild and once again, tacit acceptance. Rather than personnel changes reining in the out-of-control agency, the president has nominated the acting Bush-appointed DEA administrator, Michele Leonhart, to a full term.

The message, then, should be clear: If you're looking for who is "in control" of our military and police forces, don't look to the established chain of command and don't look to constitutional provisions that mandate civilian authority over the government bayonet. Look to the most reckless rogues -- it's a good bet they're the ones running the show.