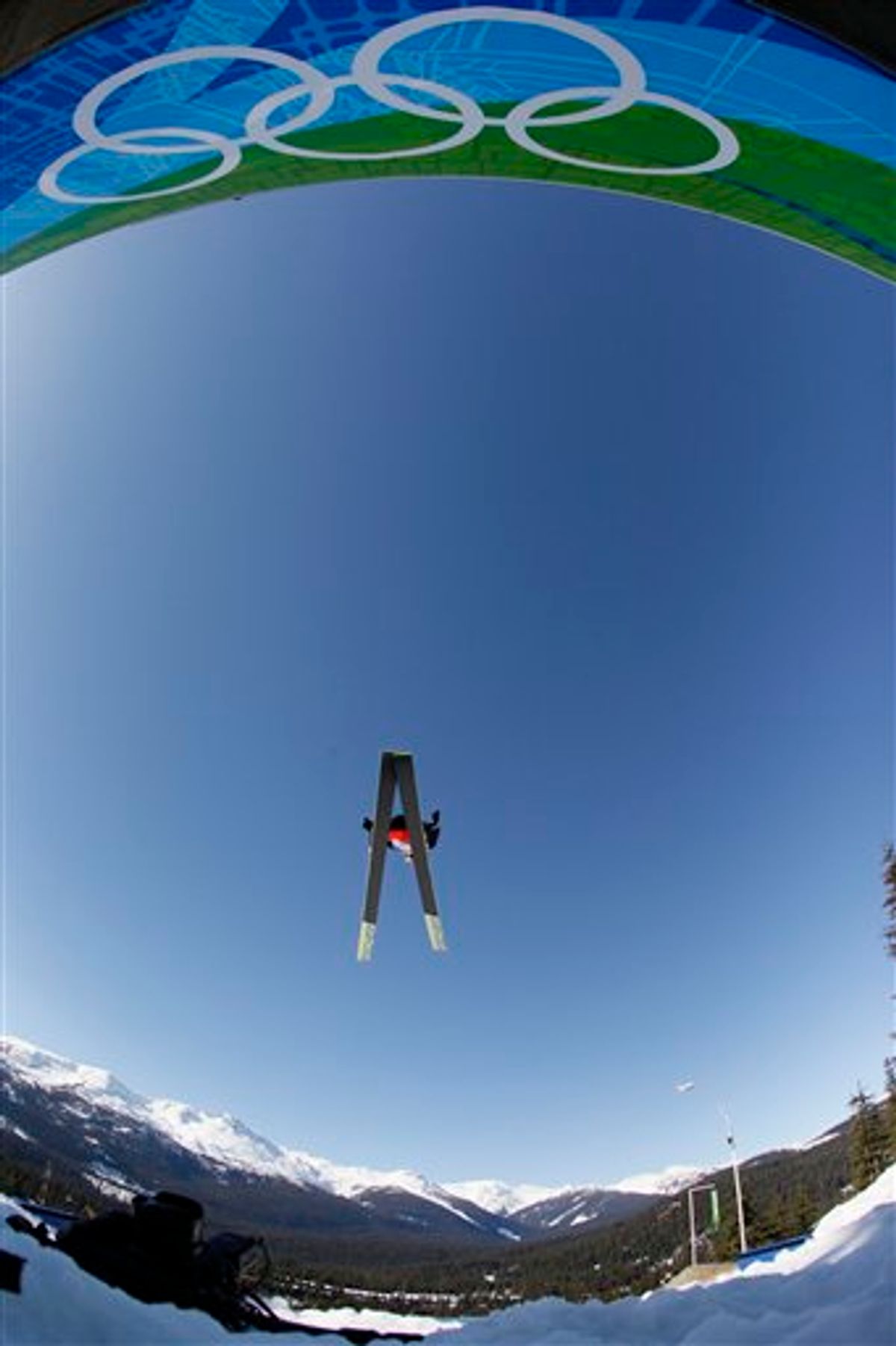 Deeper truths come fast and furious when you're watching a pair of sequined siblings floating on the blades of desire to an elevator soundtrack stuck on Tango. It's weird to see and triggers soul-searching. Watching Friday's Olympic line-up, a cataract of Ski Jumping, Men's Alpine Skiing, Couple's Figure Skating and Women's Skeleton, itself could have qualified as an Olympic sport. It was exhilarating, difficult and revelatory. Nattering Bob Costas led us not only down large snow-covered hills to weave between flags or to launch into the air. He led us to triple lutz into ourselves, to take a mythic Tango Romantica with our own souls. He's the Virgil of Vancouver 2010. And so halfway through the journey of the Olympic Games, we found ourselves on a snowy hill.

Winter Olympic sports can be divided into three categories: those that go down, those that go up and those that are level. Last night's spread included all three. While Alpine Skiing and Skeleton fall into the first category, Ski Jumping falls into the second and Figure Skating into the third.

Ski Jumping, a sport in which young boys in shiny green foam outfits slide down a large snow-covered ramp to launch themselves into the air, has been an Olympic sport since the first Winter Games in Chamonix-Mont Blanc in 1924. Ski jumpers are the gelflings of winter athletes, slight wispy doe-eyed boys (and for now, only boys) who, as has been much noted, starve themselves to fly higher. But it's easy to understand why Ski Jumping hasn't attracted much of an audience stateside. It's straightforward to the point of dull and minimal to the point of static. [Poles, on the other hand, are reportedly mad for it.] There are basically only three positions -- crouching, flying and landing and this series is repeated by every competitor with little variation. From the angle of NBC's camera, the skier himself, as he floats through the air like an aerodynamic Canadian Goose, might as well be back at 30 Rock, wearing a silly suit and standing in front of a green screen in some Gumby-inspired SNL send up. But to focus one's gaze on the barely moving part is to miss the point. There's some sort of zen haiku calm to the sport that's bores the mind but awakens the soul.

Once airborne, the skiers lean acutely into the wind beyond, like matadors of the air. They hold steady and still, the white ground reflected orangely in their ski goggles whirrs below them. For those of who appreciate the simple things in life--warm chocolate cookies, tax refunds, Fred Sandback's string sculptures--the pure geometric simplicity of the sport is refreshing: two parallel planes, separated by a parabola, like a high school physics diagram made real. For those more metaphorically inclined, the striving ascension is a reminder of man's hankering for transcendence of this realm of shadows and gravity. It's Icarus on Ice.

But of course tonight's event was just a qualifying round. The athletes weren't competing to win but simply to move on to the next level. Accordingly, my eye was keyed toward failure, hoping secretly for a Vinko Bogatag Agony of Defeat moment. Sadly/happily it never came. Instead these boys glided down the ramp gracefully, floated between 119 and 142 meters, and landed as lightly as a dandelion seed.

If Ski Jumping embodies man's transcendence, Alpine Skiing glorifies his descent. Here burly big-chinned men built like Clydesdales carom wildly down a mountain. The Super G is 2,076 meters of barely controlled chaos punctuated by great moments of difficulty. It, along with the luge, is the most unforgiving sport, one in which one error compounds into the next, where one miscalculation scotches the entire balance sheet. Anything that's goes fast, has curves and loves going down is dangerous. [You can't see me, of course, but I'm winking really hard at the screen.] Compared to the quietude of the ski jump, it's great fun to watch. Among the most spectacular on the slopes were of course Bode Miller who hewed closely to the flags, so closely in fact he wore arm pads. But Miller faced overwhelming competition both in terms of his ski time and redemption narrative from the Norwegian Aksel Lund Svindal who skied the course in 1:30:34 to win gold. Both are, to some extent, comeback kids. But whereas Bode Miller's 2006 fall from grace was self-inflicted, involving an endless series of Italian nightclubs and subpar runs in the Torino games, Aksel's fall was much more literal. In 2007, the highly rated Norwegian crashed hard in Beaver Creek, soaring unhappily through the air and breaking his face and groin upon landing. But, as we were told last night through a touching NBC montage, Aksel managed to come back to score a win at the very same course that nearly destroyed him less than a year later.

Does it perhaps say something about the indomitable American spirit that we prefer our heroes' falls self-inflicted? Indeed, "Where were you when you learned Tiger Woods was a sex fiend?" is this generation's version of "Where were you when JFK died?" We prefer our heroes on the way down than on the way up and besides, peripeteia is just so fun to watch on TMZ. This leads us somewhat unexpectedly to Figure Skating.

NBC might be losing $12 million on the Olympics but they aren't going down without a fight. Throughout the games, Bob Costas, with his puppy dog eyes glinting mischievously, has tried to stir the pure Olympic cauldron, hoping some of the lesser qualities of mankind might rise to the top. He probably has a Post-It next to his mirror in his dressing room reading, "Double, double toil and trouble; Fire burn, and caldron bubble." Last night Costas' hankering for dirt was most evident in his stoking the flames between Evan Lysacek, the American cyborg who won Men's Figure Skating Gold, and the Russian Evgeni Plushenko, who didn't. Fireside, Costas endlessly needled Lysacek about the Russian's mildly disparaging comments but Lysacek, though sleep deprived, remained gracious and even keeled. Costas O; Decency 1. But it was really in the Compulsory Ice Dance section of the night that NBC let its muckracking Automatic Grammatizator get going.

The Compulsory Ice Dance sounds like some sort of medieval torture and that's not so far from the truth. If the Ski Jump is the haiku of the games, the compulsory ice dance is a villanelle, a sport corseted so tightly with rules and regulations that the gasps of creativity are remanded to grow through the cracks. Last night couples had to dance to something called the Tango Romantica, executing precise steps on certain beats in predetermined locations while describing proscribed patters on the ice. That does sound romantic! To comprehend the complexity take a look at this scoring sheet.

Bob Dylan might have said it best when, in his 1965 ballad of Figure Skating, he described the experience thus, "Old lady judges watch people in pair/ Limited in sex, they dare/ To push fake morals, insult and stare/ While money doesn't talk, it swears/Obscenity, who really cares/Propaganda, all is phony." Essentially inscrutable to the civilian, Ice Dancing seems like a bunch of men dressed as waiters dancing with women dressed as estate brooches to the same song. Compared to this my W9 forms seem compelling.

Enter Costas and Co. who spend an inordinate amount of time focusing on the drama between the two teams of Americans: Meryl Davis and Charlie White, and Tanith Belbin and Benjamin Agosto. In NBC's hands, the rivalry--if there was one to begin with--escalates into an epic cold war. The younger Davis and White come to embody all that is light and white and right with the world. They're young and dewy eyed. Charlie likes Jack Johnson and Kanye; Meryl's favorite colors are blue and pink. They've been skating together since they were ten. Tanith and Benjamin are the Odile to Davis and White's Odette. The duo are darker, more mysterious, dramatic, older and a little condescending. After minutes of off-screen NBC waterboarding, Agosto manages to say something a wee bit not very nice about Davis and White, something like, "We have more experience." Davis and White manage to pooh pooh the rivalry itself which sounds suspiciously like they pooh pooh Belbin and Agosto. It's not much but it'll have to do and so the ice, once horizontal, starts to tilt and we merrily slide down it, picking up speed as we go.