"This Book Is Overdue!": Hot for librarian 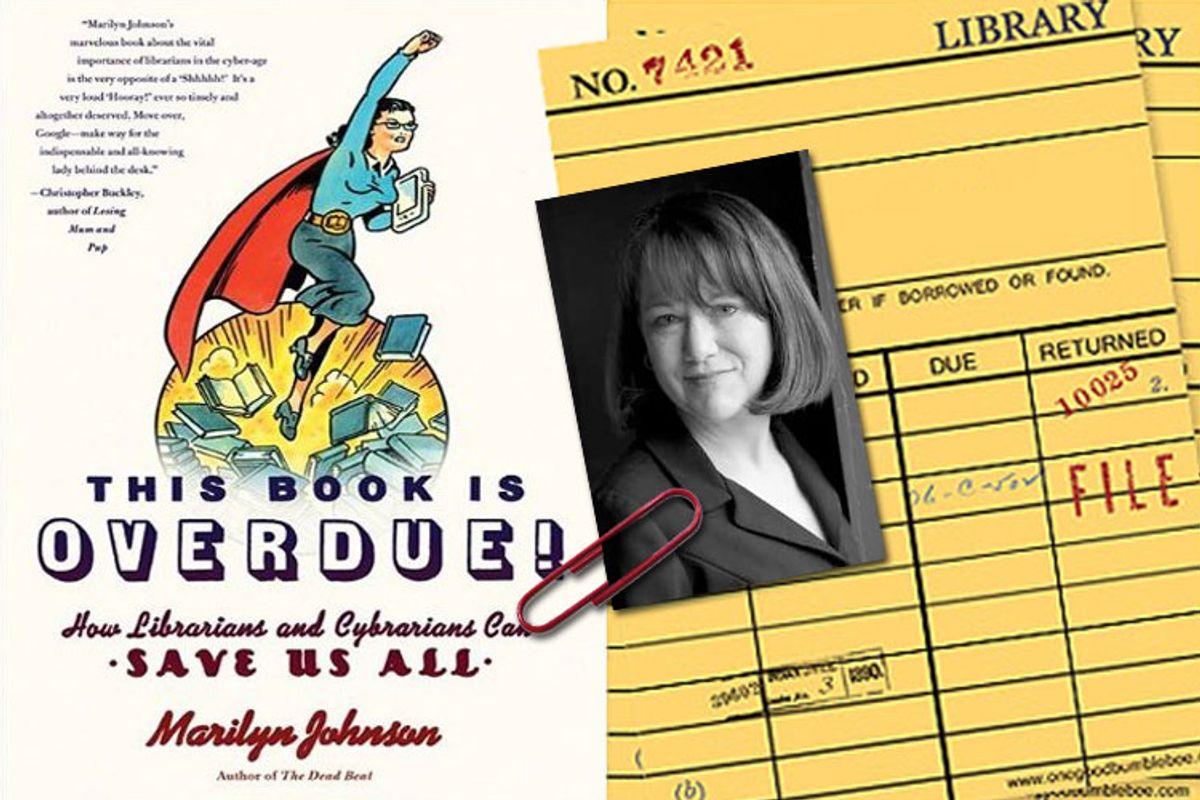 Behold the stereotypical librarian, with her cat’s-eye glasses, bun and pantyhose -- a creature whose desexualized persona and desire for us to be quiet has fueled generations of wild sexual fantasies. But there's bad news for those of you with a shushing fetish; as Marilyn Johnson explains in "This Book Is Overdue!: How Librarians and Cybrarians Can Save Us All," the uptight librarian is a species that's rapidly approaching extinction.

A new generation of young, hip and occasionally tattooed librarians is driving them out. They call themselves guybrarians, cybrarians and "information specialists," and they blog at sites like The Free Range Librarian and The Lipstick Librarian. They can be found in droves on Second Life, but also outside the Republican National Convention, dodging tear gas canisters and tweeting the location of the police.

Johnson, a former staff writer for Life magazine, and author of "The Dead Beat," a book about the fascinating world of obituary writing, delights in refuting our assumptions about librarians, while making a rock-solid case for their indispensability at a time when library systems are losing an average of 50 librarians per year. Who else is going to help us formulate the questions Google doesn’t understand, or show non-English speakers how to apply for jobs online, or sympathize with your need to research the ancient origins of cockfighting? Librarians, Johnson argues, are one of our most underappreciated natural resources.

Salon talked to Johnson over the phone from her home in Westchester County, in New York,  about the inadequacy of Google, why librarians have so many stalkers, and how a group of Connecticut librarians helped protect your privacy.

How did you know that librarians, not exactly known for their wild personalities, would make such riveting subjects?

My first book, "The Dead Beat," was about obituaries, and during my research I realized that the most engaging obits were about librarians. I once told a writer who was mentoring me that I wanted to write a book about them, and he threw back his head and howled, like, "Are you trying deliberately to stay off of the bestseller list?" But then he told me this great librarian story. That happened over and over. People would laugh, then tell me a fascinating story.

I met a librarian who had gone and embedded herself with troops in Iraq because she wanted to find out what was happening there. Her name is Shelby Monroe. She has a Web site: 101 Days With the 101st Division. Then there was the belly-dancing librarian, and the 53-year-old, quite attractive librarian from Ohio who discovered her inner roller derby queen and joined a roller derby team. She calls herself MegaBeth. I think librarians enjoy shocking people.

Aren’t libraries and librarians obsolete in the age of Google?

Go to a library. Most people haven’t seen what’s happened. Since the '90s, libraries have become computer centers, Blockbusters and community centers, all in one. We have this illusion that you can find anything on the Web, that you can type in a keyword and the world will open up. But you can get a lot of garbage and wrong information, and many, many things get lost in cyberspace or do not appear in digital form.

As for librarians, they’re civil servants. They deal with all kinds of social welfare problems, from childcare to homelessness to people who can’t navigate the bureaucracy to get benefits or help finding a job. The buck stops at the library. If we keep cutting library aid, people who can’t figure out how to file for taxes, or how to use e-mail, are going to be out of luck. About 20 percent of the population is not wired; they don’t have Internet access or a smart phone. They can’t go to Starbucks and get Wi-Fi with their $4 latte.

We have an image of the archetypal librarian, with the bun and the glasses. What does a librarian look like today?

Ah, you’re asking for trouble with this one. It’s an interesting time to try to pick a librarian out of a lineup. Some of them look like little cartoon characters, some of them like the hippest, most tattooed, multicolored-hair person at a Weezer concert. This was a problem when we came up with an image of the cover for the book. I felt bad that it was a white woman with glasses. There are so many other variations on the model now. There are tons of male librarians who are out there being very mouthy and articulating what librarianship should be now. One of them, Stephen Abram, looks like a CEO in a million-dollar suit. Another walks around with a bandanna and a tool belt.

You write that librarians have a lot of stalker problems. Is librarian stalking really that common?

Oh yeah. Librarians don’t like to wear name tags, because there are a lot of crazies out there and sometimes people fixate on librarians. Being friendly and helpful when you’re dealing with the public can be tricky. I know a very attractive librarian who will not walk alone to the parking lot. But lots of them have a great sense of humor about their image as sexy librarians, and they love toying with that stereotype. You can find blogs for the Depraved Librarian and the Society for Librarians Who Say Motherfucker on the Web (and a whole lot of others, besides) and a collection of images of naked librarians maintained by a librarian.

You write about the debaucherous goings-on at the American Library Association’s convention. What are book-cart drills?

I love those! I stumbled into a competition at my first ALA conference. A half dozen or so teams of librarians from across the country got together and rehearsed these drills with costumes, loud music and book carts! I saw one librarian spin a book cart on one wheel. I think that was the equivalent of landing the first triple axel in the Olympics. There are quite a few of these drills on YouTube, including one of a group of librarians prancing around to the song "Librarian," and wiggling suggestively to lyrics like "I want to check out your books." All that, and they can help you set up a business, and research a charity, and get ideas for throwing children’s parties.

You mention that libraries may be the last place, other than your home, where information comes free of charge. That's a pretty scary thought.

It's true. At a library you’re not assaulted by loaded or manipulated messages. I like to go to the Apple Store and work on projects with the geniuses there, but I also walk out with Apple merchandise. They’re teaching me, but they’re not teaching me about Windows. You have to be on guard everywhere in this culture; all information is loaded. But it’s not as if things aren’t being bought at the library. Books, materials, access to the databases all cost money, and librarians make choices. But they don’t turn around and sell us things. And if you ask a reference librarian which washing machine is the best buy, he or she will be as neutral as Consumers Digest. The library is a great place to go to sort out wild political claims. Verifiable information -- the truth -- is their standard.

One chapter of the book describes your involvement with librarians on Second Life, which seems like maybe the ultimate geek activity. Could Second Life represent the future of libraries?

Well, I think the whole Web is going to look something like Second Life someday soon. You’ll be able to project yourself into the screen and navigate pages that feel three-dimensional. I got to go on Second Life and sit in a meeting with librarians from Scotland, Australia, Germany, Africa, China, and have sidebar conversations about the future of the field as a presentation was taking place. Librarians are real pioneers, out there inventing ways to engage in virtual reality, reinventing libraries using pixels and digital resources, and figuring out how to be useful to inventors and explorers of this and other kinds of cutting-edge software.

It was weird and colorful and exciting, and as I described in the book, I had a number of old-fashioned library experiences in the futuristic world of Second Life that delighted me. I dressed up my avatar like a 19th-century duchess and sat in a beautiful garden and talked with smart people from around the world about "Alice in Wonderland." Very trippy!

Librarians are considered pretty passive people, yet they were some of the strongest opponents of the Patriot Act. A group of them even sued the U.S. government to keep their patrons' records private. How did they manage that?

Like doctors and teachers, librarians have a code of ethics. And foremost in that code is their assurance that if you check out the shared resources in the library, or ask a librarian for help of a sensitive or personal nature, they are not going to betray your confidence.

When the USA Patriot Act was passed into law, the FBI started sending out National Security Letters, asking for patrons’ records. And these NSLs carried gag orders with them. If you got a letter, you could never tell anyone -- ever -- that you had been asked for information by the FBI. You risked prison time if you spilled those beans.

But when Library Connection, a consortium in Connecticut, received an NSL, its officers decided to challenge its constitutionality in court. They sued as John Doe and had to maintain absolute secrecy until the courts finally dropped the case. Though there was no ruling on the constitutionality, as the librarians had hoped, their gag order was dropped, and to date, they are the only recipients of an NSL who can speak about this incursion into our traditionally private records with authority. The act, by the way, is still on the books. Chances are very good that the FBI has your library records.