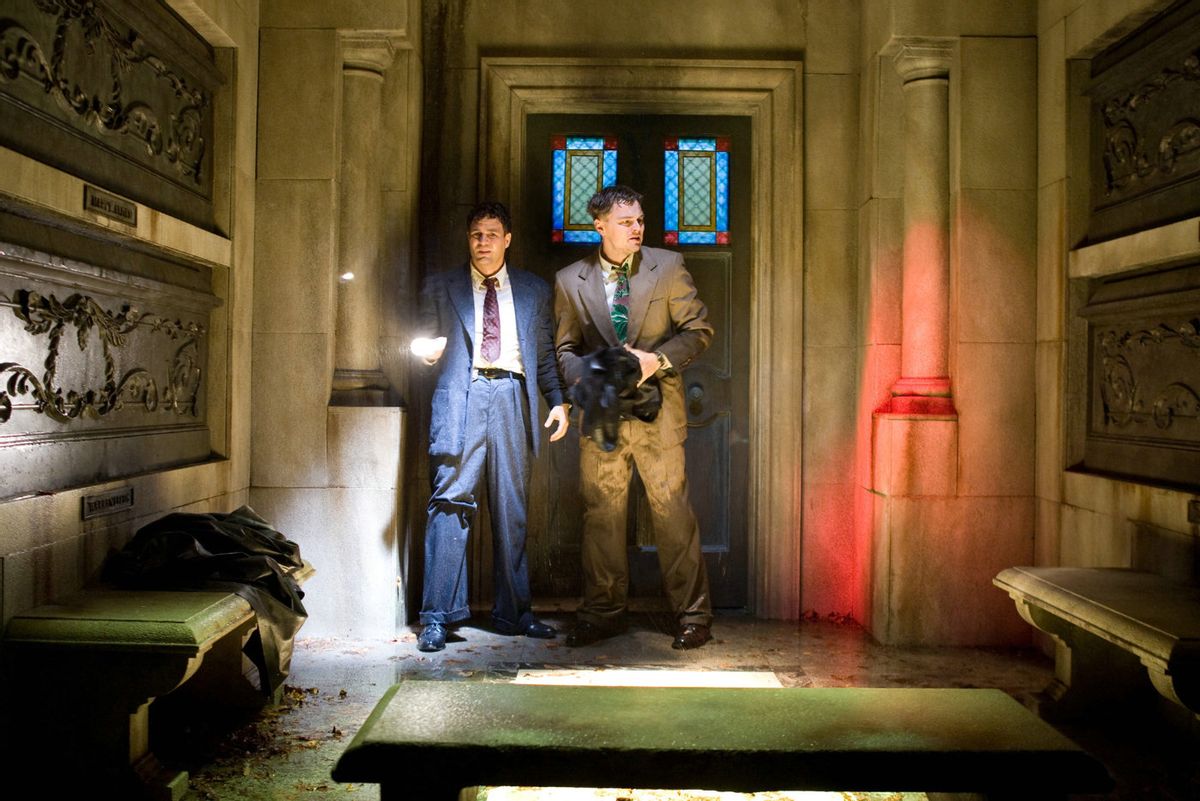 The infamously delayed "Shutter Island" debuted to smashing business over its initial weekend, as the Martin Scorsese thriller debuted to $40.2 million. That's a personal best for both director Scorsese and star Leonardo DiCaprio. Scorsese's previous best opening was the $26.8 million debut of "The Departed" in October 2006 (also starring Leonardo DiCaprio), while this was DiCaprio's second $30 million-plus debut, following the $30 million opening of Steven Spielberg's "Catch Me If You Can" back in December 2002. Since both the star and director have rarely opened anything over $10 million based on their respective names alone, credit should go to the marketing and the general concept of the story. As I've often said, adult thrillers are in rare supply these days and the few that make through the pipeline have a pretty decent track record (you think "Vantage Point" or "Law-Abiding Citizen" opened to around $22 million apiece due to critical acclaim?). Mix a genuinely intriguing concept (1950s lawman trapped in a scary mental hospital), factor the pedigree involved, and then add a compelling and pervasive trailer that has been running in every theater nonstop since August, and you had the recipe for a breakout weekend.

Most promisingly, the $80 million potboiler improved over the weekend, going from a $14.1 million Friday to a to $16.3 million Saturday. Paramount predicted a 40 percent Sunday drop to $9.7 million, so I think we're being buttered up for a "Wow, the movie did even better than we thought" Monday press release when the finals are released. Regardless, in this day and age, a 2.85x weekend multiplier is pretty solid for any opening weekend this big, even for an R-rated adult-driven thriller.

Much will be written about how Paramount's choice to move the picture from October 2009 to this weekend was a brilliant move. In hindsight it was, but it purely a hard financial call, as the studio was trying to save money during the last quarter of the year, until the DVD cash from "Transformers: Revenge of the Fallen" and "G.I. Joe: The Rise of Cobra" came rolling in. As you recall, Paramount also delayed the wide-release of "The Lovely Bones" by a full month and delayed the wide release of "Up in the Air" from Thanksgiving weekend until Christmas Day. Point being, Paramount was trying to save money. Ironically, this brought about a situation where Paramount had nothing to spend money on except some little cult film that was shot on a home camcorder. As I've said any number of times, the huge success of "Paranormal Activity" had a lot to do with the fact that Paramount didn't have anything else to market at the time, so they were able to devote themselves to propping up a would-be cult hit and turn it into a mainstream sensation. While Paramount looks like geniuses in hindsight (they now have a very strong and continuous slate all the way into 2011), it was strictly a decision made out of economic necessity.

Believe it or not, "Shutter Island" was the only wide release this weekend (which certainly helped boost the picture past the $25-30 million that it likely would have opened to in crowded October). The biggest limited release debut was Roman Polanski's "The Ghost Writer," which debuted to $179,000 on four screens (about $44,000 per screen). The well-reviewed Summit release expands next weekend to 10 new markets. Of course, this seemingly low-key political thriller somehow cost $45 million to make, so it's going to be a long while before this one sees any real profit, barring huge business overseas. Every other limited release ("The Good Guy," "Defendor," "Happy Tears," "Blood Done Sign My Name") pretty much tanked. The rest of the news concerns holdovers, and the news was decidedly grim. When even Avatar drops 31 percent (great for any other movie, but a record weekend drop in its 10th weekend), you know it's a bad weekend. Still, Avatar made another $16 million and has now grossed $687 million domestically. It will likely cross $700 million next weekend, the last weekend before it loses most of its 3D and all of its IMAX screens to the apparently much-anticipated "Alice in Wonderland." It's all downhill from there.

Last weekend's champ, "Valentine's Day," proved to be a one-weekend wonder, as it plummeted 69 percent for a $17 million second weekend and an $87 million 10-day total. It will cross $100 million next weekend, but the once-assured $150 million mark will now be an uphill battle. "The Wolfman" was equally hammered, dropping 68 percent for a $9.8 million second-weekend and a 10-day total of just $50 million. Needless to say, the stupidly-expensive $150 million horror picture is in deep trouble. "Valentine's Day" fell due to the nature of its release. It was designed to cash in on a holiday that is now over. Plus, quality-wise, it was no "He's Just Not That Into You," which at least tried to deal with romantic entanglements in a semi-realistic fashion. "The Wolfman" fell due to the insurmountable combination of terrible word of mouth and direct competition in the form of "Shutter Island." Dropping 50 percent was "Percy Jackson and the Olympians: The Lightning Thief" (gosh, I'm tired of typing that gigantic title). The terrible young-adult fantasy picture grossed $15 million in its second weekend and now has amassed $58 million. At this point, $100 million is no longer in the cards.

In other news, "The Book of Eli" crossed the $90 million mark. Dear John fell another 54 percent, proving that the film was in fact heavily front-loaded. At $65 million in three weekends, it will barely surpass the $81 million domestic gross of "The Notebook." "Crazy Heart" crossed the $20 million mark and will likely reach $30 million if Jeff Bridges wins the best-actor Oscar as expected. "Edge of Darkness" crossed the $40 million mark, which still makes this Mel Gibson's lowest-grossing starring vehicle in 17 years ("The Man Without a Face" grossed $24 million back in 1993). "Up in the Air" is at $80.9 million, which means it's the second-highest grossing film of all time never to make the top five in any given weekend. "IMAX: Everest" grossed $87 million, which makes it the top-grossing film to never reach No. 5 or even 10th place in a weekend. Finally, the main casualty of Paramount's date-switching, "The Lovely Bones," sits with just $43 million. Had the film opened fresh on Dec. 12, 2009, it likely would have opened better and lasted longer, but it instead spent a month in three-screen limited release, where it weathered bad reviews, poor word of mouth and the domination of "Avatar."

That's it for this weekend. Join us next weekend when Kevin Smith's ode to '80s cop flicks, "Cop Out," tries to avoid playing like every other Kevin Smith movie ($8-11 million opening, $25-30 million finish). Overture releases "The Crazies," yet another remake of a mostly forgotten horror flick. In limited release, the big player is "The Yellow Handkerchief," which stars William Hurt, Kristen Stewart and Maria Bello. God help any junketeer who dares to ask William Hurt a question about "Twilight" ...