A repeat of 1994? Not according to these numbers

You'd never know it from the media coverage, but more Republicans than Democrats are leaving Congress this year 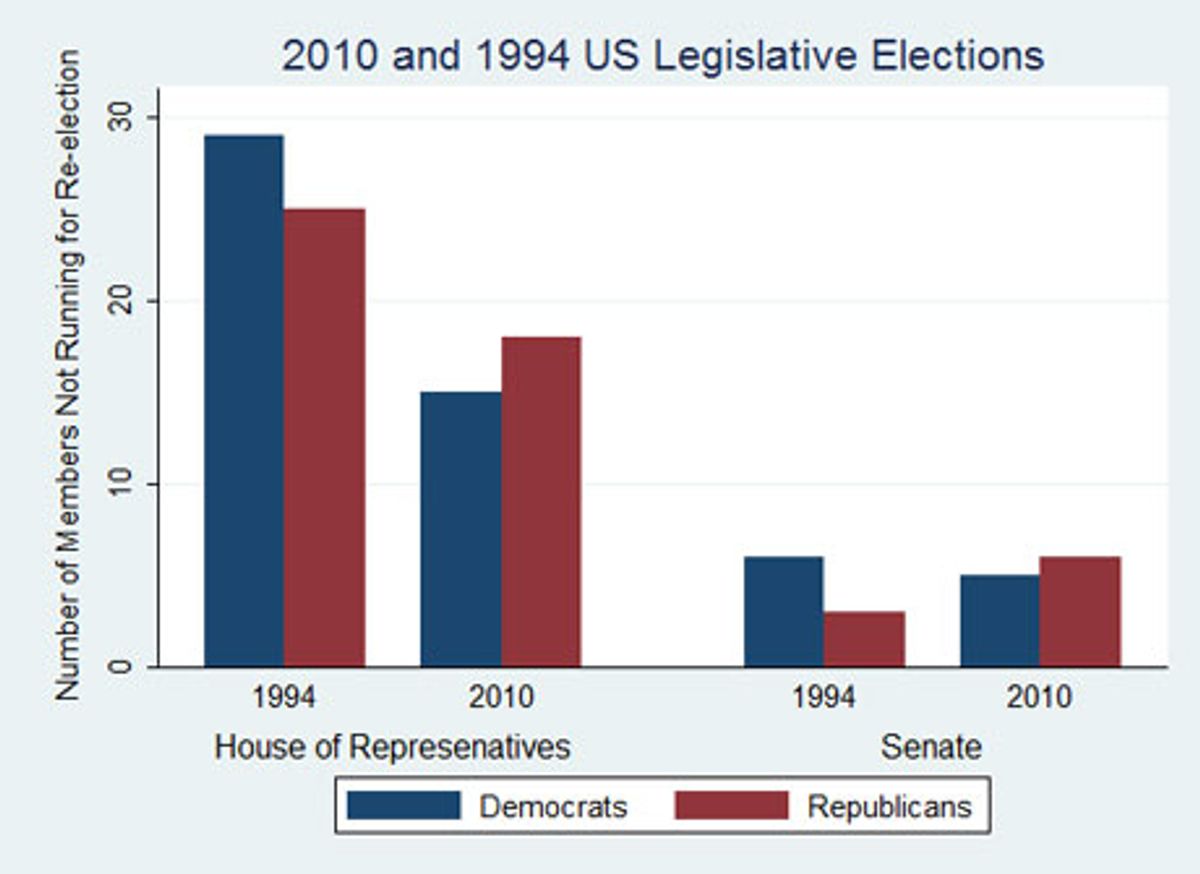 For months, Republicans (with an assist from the media) have been playing up the possibility that this fall’s midterm elections will offer a repeat of 1994, when they posted massive gains to claim control of the House and Senate. And now, even some Democrats are starting to wonder.

“If the 2010 election were held now, it would look like 1994,” Democratic pollster Stan Greenberg decreed last week.

But in at least one key statistical category, 2010 looks different from '94: retirements.

With Democratic Rep. Brad Ellsworth’s (Ind.) decision last week to run for the U.S. Senate, 15 House Democrats are voluntarily giving up their seats this year. (A voluntary decision to vacate a seat is how, for this exercise, a retirement is defined.) For Republicans, the number is currently 18. But in ’94, Democrats outpaced Republicans on the retirement front, 29 to 25.

In the Senate, five Democrats are retiring this year, compared to six Republicans. Sixteen years ago, there were six Democratic retirements, to only three for the GOP. Notably, all six of those seats vacated by Democrats were taken over by Republicans.

The significance of this is obvious.

Incumbents hold huge advantages in securing reelection over challengers, especially in House races. Thus, a retiring member from the opposite party almost always offers a better opportunity than normal for a party to pick up that seat. Similarly, a retiring member from your own party is a seat you’ll have to work harder than others to hold.

Still, as of this moment Republicans have more open seats to defend than Democrats in both the House and the Senate -- and that’s not at all what we saw in 1994.

Joshua A. Tucker is an Associate Professor of Politics at New York University and a Visiting Professor at the Center for Advanced Study in the Social Sciences at the Juan March Foundation. He blogs about politics and policy at The Monkey Cage (http://www.themonkeycage.org/).