Do you believe in Millercles? 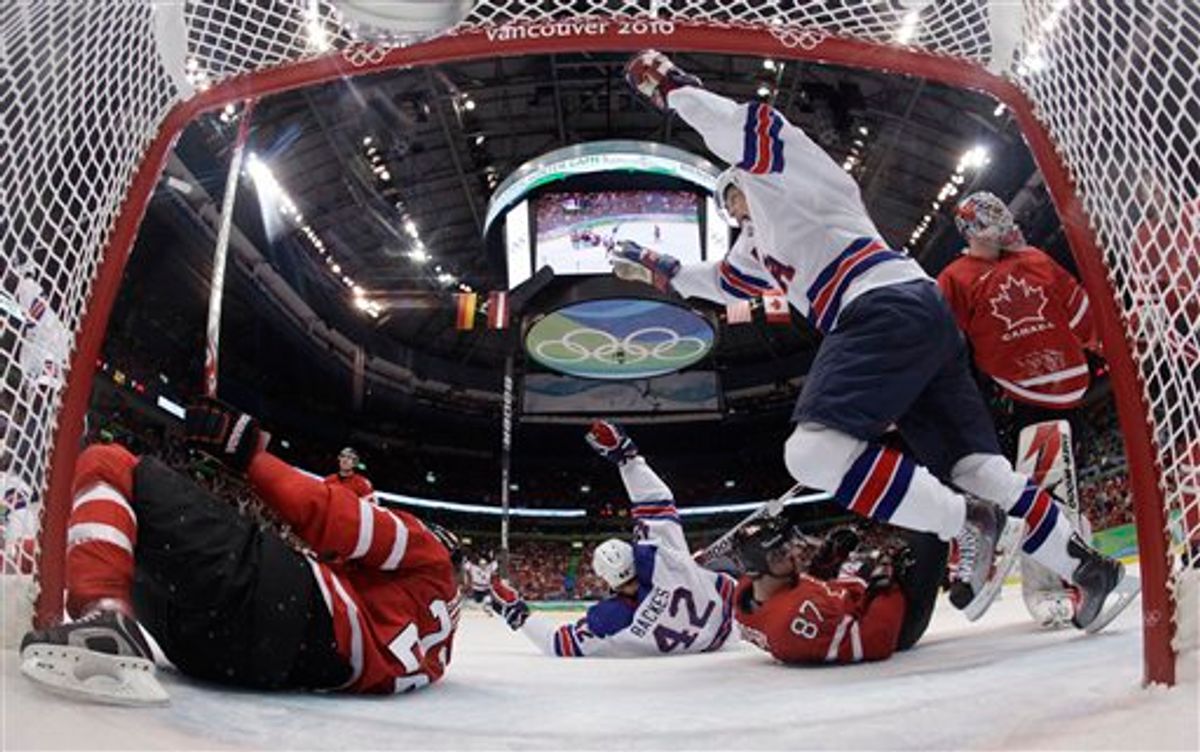 USA's Bobby Ryan celebrates a goal against Canada by teammate Chris Drury, not shown, in the second period of a preliminary round men's ice hockey game at the Vancouver 2010 Olympics in Vancouver, British Columbia, Sunday, Feb. 21, 2010. Canada's Dan Boyle (22), left, Sidney Crosby (87), center, and goalie Martin Brodeur (30) were in on the play. (AP Photo/Julie Jacobson) (AP)
--

Canada, your gold medal hockey chances are in peril. Somehow, you were upset by an inexperienced, peach-fuzz-riddled U.S. hockey team. It'd be easy to smother Maple Nation with smug, cheap jokes (Canada would have had a chance if hockey was their national sport!), or just turn this recap into an extended "U-S-A" chant.

It'd be easy to do all this, if I'd missed the game.

Not only did the MSNBC feed catch every bead of condensing sweat, it also delivered collective agony to the living room. Canadian pain was palpable -- a guileless honoring of an awful moment. The Canadian fans didn't throw objects, and they didn't boo. When the final buzzer sounded, many just stood, blankly staring as though moving on was an unfathomable admission of what had happened. The announcer called the noise "a meaningful semi-silence," which sounds like a malapropism. Perhaps he meant the relative silence (the game started with a blast of ear-splitting chants and cheers) revealed more than just "We lost, that sucks." The crowd's subdued murmur sounded like a wake reception, where the only audible noises are whispered condolences.

To fail at what defines you is the worst failure of all. You have to feel for them. Watch this Michael J. Fox commercial for Canadian Olympic hockey for greater perspective on what this loss means up north. Yes, it's a commercial, but Fox makes a solid emotional case for hockey as more than sport. He even skates to prove his point.

"To Canadians hockey isn't just a game. It's our game."

Except when it isn't. This was hockey night in America -- a chance to experience an upset that commemorates the 30-year "Miracle on Ice" anniversary. As a nation the U.S. might not have wanted it more, but it's hard to say that about the players. The American announcer shouted, "Those are a bunch of happy humans right there!" as the young U.S. team joyously slid around the ice. Seldom have I seen happier humans.

A majority of the credit goes to U.S. goalie Ryan Miller, who saved so many shots, it looked like he was juggling. Miller also conducted the post-game interview with a hyper-endearing "Fargo" accent, launching him kilometers ahead of Bode Miller in Miller likability (#doyoubelieveinmillercles became a raging Twitter phenomenon).

Speaking of Bode, I have some breaking news about the Super Men's Combined gold medal winner. Someone was kind enough to e-mail this top-secret letter the American press just sent to Miller, I'm just passing it along:

Now we like you. We know, it's weird. You used to be the archetypal douche bag, and today, you're a hero (again). Now that you've won the gold medal, we can pump out endless streams of lazy redemption narratives. Just smile, and validate everything we say about you. Please nod when we ask leading questions about improved work ethic. We don't really know if you've matured, if you want it more, or even if you just want us to stop ridiculing you. All we know is that this can be a mutually beneficial relationship. You'll be able to profit off beer commercials and we can cater to preconceived notions about who Olympic champions are. Ever written columns drunk? Not as hard as you'd think.

I always liked Bode Miller because I love athletes who challenge what they're supposed to be. This recent Bode quote about his 2006 Torino implosion was great:

"As [Torino] got closer and closer, I felt more and more trapped by what everyone else was saying."

Miller went on to say that he feared losing "ownership of his identity." That's a level of introspection we should want from athletes. As for how we judge Bode, maybe he just enjoyed skiing and didn't want to be anyone's hero. Is that so wrong? So Miller partied and bragged about skiing drunk. Do we want our athletes to be robotic strivers? I have a soft spot for the tortured talent. Few entertainers are more gripping than the ones who can't cope with incredible gifts and resent everyone else for their vicarious wishes.

When I saw Miller on the podium, holding back what looked like a wry smile, I wondered: Does he still think this is all a bunch of bullshit? If he does, that's fine. I don't need to believe in Millercles. Actually, there'd be something pretty miraculous about a slacker becoming the best American men's skier ever. Olympic athletes don't have to care more than the fans for Olympic success to resonate across the land. Hey, look what all that caring got the Canadian hockey team.

Figure skating is oddly compelling, and it even has its own harmless disaster porn element (fall and you're done). I'm out of my depth in analyzing why any duo succeeds or why their sartorial choices help, but I'll give it a whirl: Holy hell, the Russian aboriginal costumes were an "interesting" choice. Sensitivity considerations aside, Oksana Domnina and Maxim Shabalin looked bizarre as aboriginals. Perhaps it was their contorted grinning, or how skates don't match with warm climate dress. The Russians underperformed in a sport they usually dominate, and they did it to the tune of a popping, thumping, hiccupping didgeridoo. An entertainingly offensive failure, or an offensively entertaining failure, either way, I was amused. They fell from first to third place after the second of the three phases of the ice dancing competition.

Russians hurt the Czechs: Smacked into the Sunset

Wish I could embed a youtube clip of Russia's 24-year-old Alex Ovechkin demolishing Czech Republic's 38-year-old Jaromir Jagr, but NBC doesn't want any of you commoners entertained. The clip's lying somewhere in Jeff Zucker's wine cellar, maybe you can buy a Russian bootleg.

Anyway, it was a hit that reverberated, changing the tenor of a bitterly contested hockey game. The benches were trash talking in English throughout the match. The announcers claimed this wrenching check silenced the Czechs for good.

Jagr -- one of the all-time greats -- just didn't see his usurper coming. In one moment, Jaromir was dribbling at center ice, in the next he was on his back. Seven seconds later, Russia scored to go up 3-1.

We non-athletes face our mortality in various ways, but it's rarely this visceral. There's something unique about getting savagely beaten by someone who is what you used to be. Jagr bounced right up, skated to the bench, and slapped at it in frustration. He later hung his (thankfully still intact) head. The younger superstar had laid him low, possibly for the last time.

The Georgian luger's death was horrific, sad and preventable. And it's uncomfortable to admit this: Nodar Kumaritashvili's tragedy primed us for suspense. Any downhill event has had me on seat's edge, wondering just how incompetent the IOC really was. Every skiing accident carried the subconscious knowledge that death was in the realm of the possible. It was like watching football if part of me expected the running back to literally be killed by a hit. No one's in favor of making the Winter Olympics more dangerous, but we aren't changing the channel when danger's in the air.

What else could explain these high ratings? NBC is getting pilloried for tape delays, programming decisions -- it's a real anger felt by the masses. The network has become our national punching bag, we resent them for it, and we feel the peacocks owe us a better Olympics. And yet we're watching. It's ironic that an Olympics often derisively dismissed as effeminate could use danger as its deus ex machina.