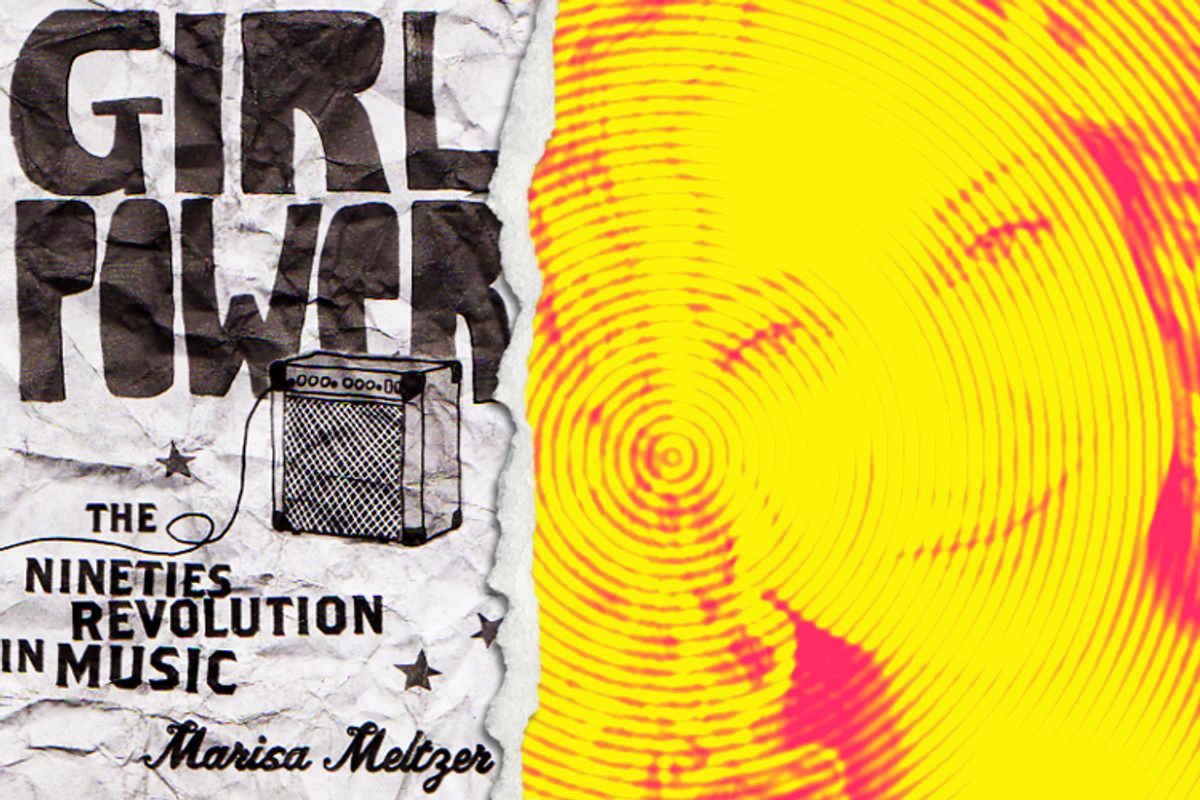 Nearly two decades ago in Olympia, Wash., a group of lady musicians decided to plot a revolution, girl-style. "We really did sit down and say, 'How can we change what it means to be a girl?' and, 'How can we reinvent feminism for our generation?'" Bikini Kill's Tobi Vail told author Marisa Meltzer in her new book, "Girl Power."

The revolution — an overtly feminist movement in the punk underground — was already percolating across the country. But these ladies gave it a name: Riot Grrrl. (Jen Smith of Bratmobile came up with the idea of a "girl riot" while Vail added the triple rrrs that made girls roar.)

Like most of their compatriots in the punk underground, the riot grrrls held themselves and each other to high standards of artistic and political purity, which often included a willful distrust and disdain for the mainstream media. (After being caricatured in one too many newsweeklies, members of the riot grrrls actually instituted a "media blackout" in 1992.)

But, as Meltzer argues in her new book, their overt feminism had an influence on women in rock throughout the decade: Bands like L7, Hole and Sleater-Kinney (the latter two bands both nurtured in Olympia) and musicians like PJ Harvey and Liz Phair loomed large in the alternative underground; songs by "angry women" (including Alanis Morissette, Fiona Apple and "Bitch" one-hit wonder Meredith Brooks) shot up the mainstream pop charts, and by the end of the decade a bastardized version of "girl power" was used to market everything from the Spice Girls to the Powerpuff Girls (a condition that Jennifer Baumgardner and Amy Richards, the authors of the third-wave feminist tome "Manifesta," dubbed "Spice Girl Pencil Set Syndrome" — "girls buying products made by male-owned companies that capture the slogan of feminism, without the power"). Indeed, Posh Spice Barbie is a far cry from anti-rape anthems and the infamous tampon incident of 1992, in which L7's guitarist Donita Sparks allegedly flung her used tampon at hecklers at the Reading Music Festival.

Author Marisa Meltzer went to school at Evergreen State College in Olympia, in large part to be near the epicenter of the movement. When Sleater-Kinney broke up in 2006, Meltzer wrote in an e-mail to a friend, "My youth is over." That grew into a eulogy of sorts for the band on Slate. Eventually, Meltzer decided that a full-length book on women in '90s rock was the perfect follow-up to her first book, co-written with Kara Jesella, on the '80s and early '90s feminist teen magazine Sassy.

I met Meltzer earlier this month at the Bell House, a music venue in Brooklyn. Meltzer was wearing an outfit — floral skirt, chunky shoes, blackish-red nail polish, leopard-print coat — that would have seemed entirely appropriate attire to go see Heavens to Betsy in some kids' living room in 1992, and just as appropriate for our evening's activity — a record-release party of "Teen Dream," by Beach House, a band on the Sub Pop label featuring charismatic frontwoman Victoria LeGrand.

As we settled into the couches, sipping cocktails that just happened to be named in homage to feminist electroclash darling Peaches, we talked about the definition of feminist pop, how the riot grrrls gave birth to Beyoncé, and the difference between vagina music and cunt music.

The ultimate slur in the '90s underground was to be a sellout. But you seem to think mainstream stars like Alanis Morissette and the Spice Girls played a role in this "girl power" thing for kids who had more access to Seventeen or Newsweek than zines. Did the artists of the '90s put too much emphasis on artistic purity?

For kids of this generation, it's just a non-issue. But for people of our generation, it certainly is. I think we'll take it to our graves. I don't think we're ever going to be like: We're done with the purity-versus-sellout debate! But even as adults, we have to remind ourselves that it's not so easy to find artists or to find cool stuff. I think there are tons of people, myself included, who found out about bands through Nirvana's success. That's how I found out about the Raincoats and the Vaselines — just from obsessively reading interviews with Kurt Cobain after I saw "Smells Like Teen Spirit" on MTV when I was 14. I went down that rabbit hole that people do.

People can be really critical of Miley Cyrus or Lady Gaga, but 8-year-old girls might just be seeing their power — that's what they identify with. I think that's what I was identifying with Madonna and Cyndi Lauper. I didn't understand any of the references or any of the subtext. But there was just something about their urgency and power, something I identified with as a common girl experience on a really primal level. I try to remind myself of that when I look at pop stars now.

I do think that's part of the success of Taylor Swift — she is a "nice girl" first and foremost — but she does have some of that anger laced delicately through her songs. As part of the research for this book, I went to see Pink, Beyoncé, Lady Gaga, Britney Spears, MIA and countless teen bands and girl bands. That was another thing: realizing how fun arena concerts are. I saw Beyoncé with her 15-piece all-girl backup band — two female drummers! — and I was like, if riot grrrl didn't succeed, I don't know what did. It's a bit of a stretch drawing the line between riot grrrl and Beyoncé, but I'll do it. I was just like, Wow! That's feminism right there! That's amazing. And if you're some little kid, and you're going with your mom to see that, how inspiring! I cried.

Many of us were obsessed with riot grrrl, but you came to your expertise honestly. You actually "went to school in Olympia," as the Hole song goes.

Kathleen Hanna lived upstairs from me. Olympia was at height of its coolness, so you'd be at parties and someone from the Beastie Boys would be there. I was at this disco party and [R.E.M.'s] Michael Stipe just happened to roll in. And of course you couldn't acknowledge that person or their fame.

Writing this book was hard, because I had to tell myself, OK, I'm not seeking these people's approval anymore. I think it's balanced. I'm biased, of course, and it comes with a lot of love. But there were definitely moments when I pictured people reading it and thinking I was an outsider criticizing their experience. I felt like my adolescent self all over again.

What makes a girl power band? Do the ladies have to identify as feminist? Or just be ladies in a band?

I go back and forth. I think there's something really powerful about seeing an all-girl band, and that power is never really going to go away for me. I'm always going to have a soft spot for it, and I'm always going to have respect for it. Something like the No Doubt-Blondie female frontwoman with a guy band — it's like when friends change their names when they get married. I don't think they are bad people, but there's this little part of me that just wishes it were a little different. That probably has more to do with my own prejudices and insecurities, but that's how I feel about it.

But now it seems there are a lot of bands that are just mixed. It's not just about the hot female frontwoman, or you just have a duo, a guy and a girl. It's become more normal for girls to play music, and thus they don't always have to band together in order to do it. I think people should make music with whoever they are creatively compatible with. But I wish there were more all-girl bands now. I think a lot of them are not so much my thing. I mean, I like the Donnas. The Dum Dum Girls are a great all-girl band. I love Best Coast. That's a girl and a guy. But they aren't girl power — like singing about the female experience. And that's fine. I don't need every band to be commenting on feminism or to have songs about friendship and PMS. But I do like a song about tampons as much as anyone. If they can bring Lilith Fair back, they can bring the tampon throw back.

Aha! That brings us back to Lilith Fair, back at a stadium near us this summer. I have to admit, the first time around it just didn't seem so punk rock to me. What are your thoughts?

When it first started, I was in college, I had been going to shows for like seven years. I didn't need some stadium rock touring thing that was expensive and I had to listen to vagina music. I wanted to listen to cunt music. But now I think, What was I thinking? Lilith Fair was amazing! Now I'm kind of into that vagina music. I'm excited about Lilith Fair in retrospect because it felt, like, radical. Here you had a touring festival of women, and they made a ton of money to give to charities, and they sold out everywhere, and they had these booths devoted to things like abortion rights. Why was I so dismissive of that? So now I couldn't be more excited for Lilith. I actually think the lineup is pretty hot. La Roux, Heart, Indigo Girls, Sia. Sarah McLachlan is obviously playing. They're not afraid of raw feminism, apparently, at Lilith 2.0. It's a nice mix of vagina and cunt music. I'm super-psyched! I can't wait to go. I'm ready to buy a shirt to support the fight against breast cancer or whatever.