Thousands petition to include pole dancing in the games 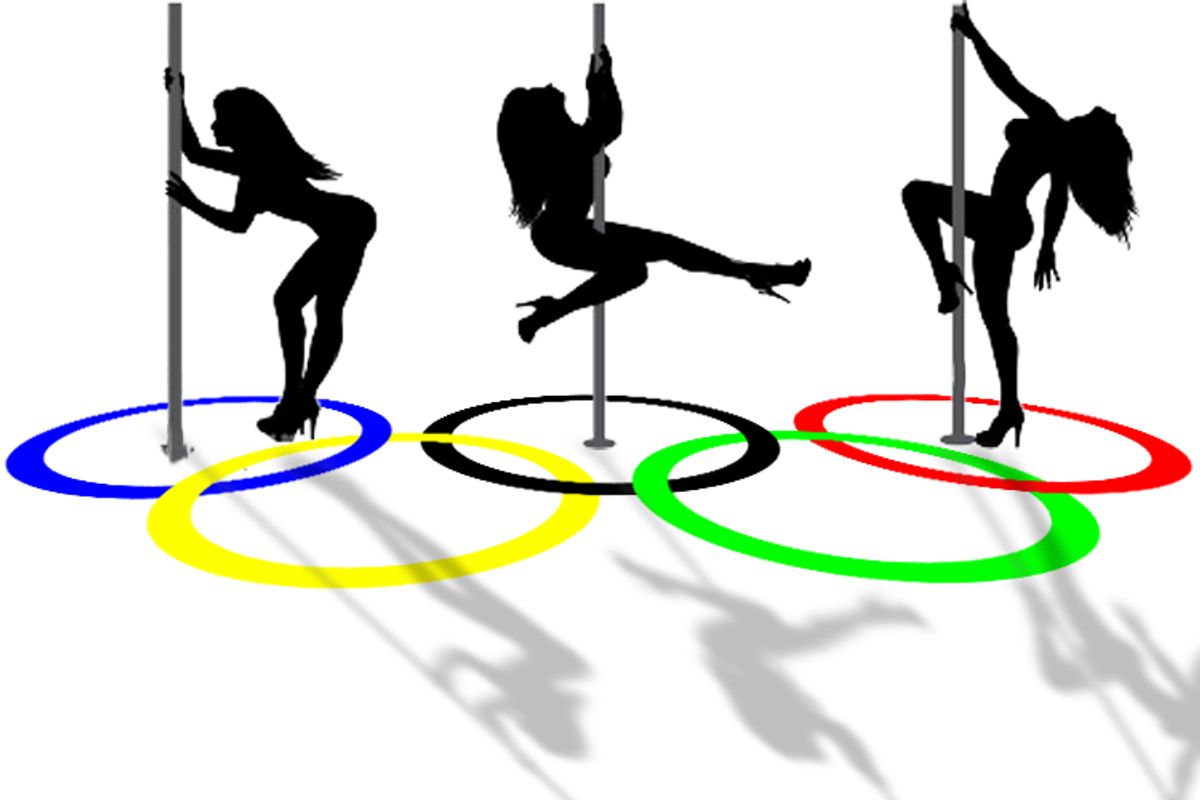 There are some pretty unusual sports in the Olympics -- skeleton, anyone? -- so it's understandable that some fringe athletes would think their particular talent deserving of inclusion, too. But "sport" isn't generally the first word that come to mind when one thinks of pole dancing -- and the words that do? Well, they aren't super family-friendly.

Nonetheless, a petition is circulating to get the discipline into the Olympics and it's already netted roughly 4,000 signatures. Much as this might seem like a sexy publicity stunt (not that pole dancing really needs the added attention) the organizers behind the push appear incredibly earnest. Ania Przeplasko, founder of the International Pole Dancing Fitness Association, told the Associated Press: "There will be a day when the Olympics see pole dancing as a sport. The Olympic community needs to acknowledge the number of people doing pole fitness now. We're shooting for 2012."

It seems far-fetched -- but, hey, Martha Stewart recently rocked the pole on national television and suburban gyms have been fully saturated with strip aerobics classes, so anything is possible these days. "Now, when you talk about it you don't hear 'like a stripper' anymore," Wendy Traskos, co-founder of the U.S. Pole Dance Federation, told the AP. "You hear things like, 'Oh, my friend takes classes for fitness' or 'Yes, I've seen it on Oprah.'" It's considered good, clean fun for women who want to play at being bad without the risk of having a Scarlet-letter stamped on their chest. Having been sufficiently scrubbed of its past of ill repute, "regular" women can take pole dancing classes without ever having to set foot (a Lucite-heeled foot, to be sure) inside an actual strip club.

To be totally honest, contemplating pole dancing as an Olympic sport makes me cringe -- but not because I don't think it requires athleticism. I've been to my fair share of strip clubs -- in part because, like the nerd I am, I studied "gendered interactions" at nudie bars for a women's studies class in college -- and am in total awe of the power and skill it takes to do gymnastics on a vertical metal pole, while nearly naked. Not to mention, I've been regaled with enough war stories from friends who have taken pole dancing classes (one friend fell on her head and ended up in a neck brace, another got deep-purple bruises on the inside of her thighs) to know there's more involved than mastering the hair flip and come hither look.

What does bother me about the mainstreaming of pole dancing -- particularly elevating it to the apotheosis of sportsmanship and nationalistic pride -- is that it doesn't come with a greater acceptance of or respect for actual sex work. In fact, if anything it does the opposite, merely redrawing the virgin-whore line: Some girls do it for money (for shame!), some do it for flirty fun (or, maybe one day, gold medals). It's just another symptom of our cultural schizophrenia when it comes to sex.