How it feels to lose Olympic gold 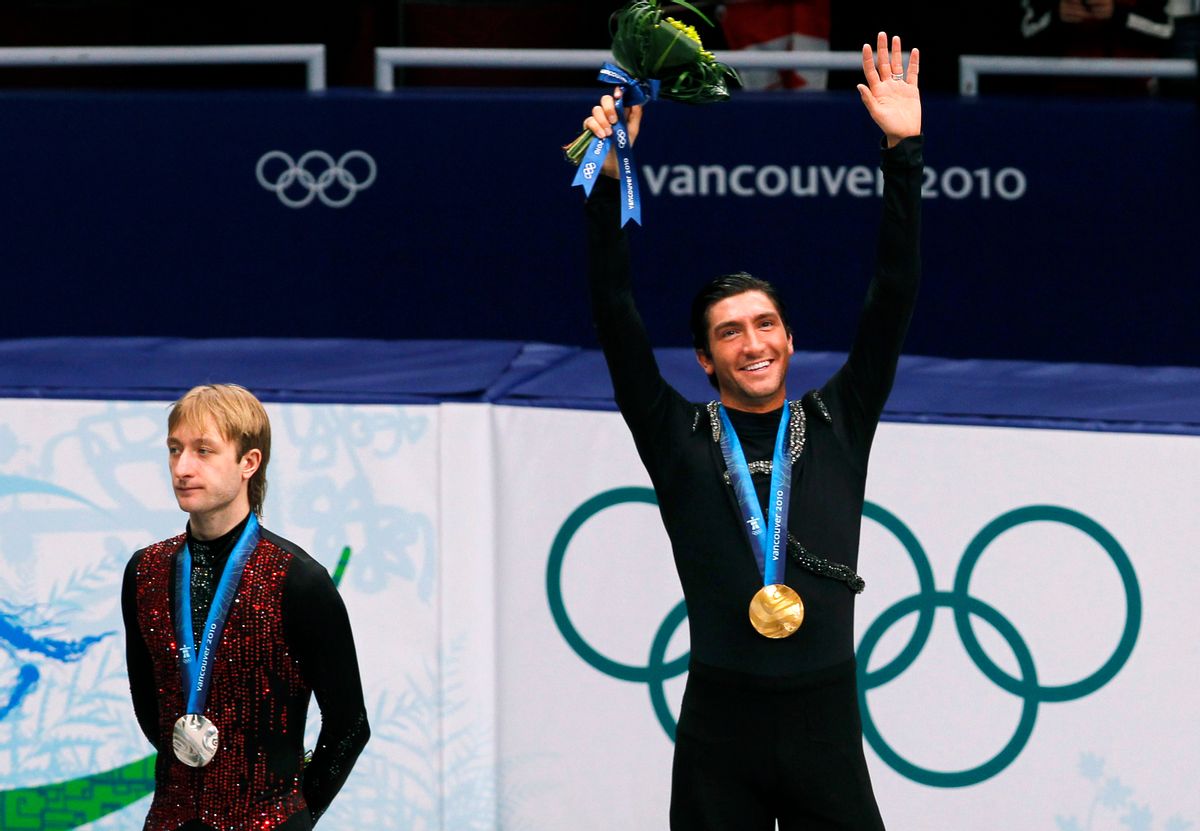 Gold medallist Evan Lysacek (R) of the U.S. waves as he stands next to silver medallist Yevgeny Plushenko of Russia during the medal ceremony after the men's free skating figure skating competition at the Vancouver 2010 Winter Olympics February 18, 2010. Russian Prime Minister Vladimir Putin climbed into the controversy surrounding Plushenko's surprise defeat in the Olympics figure skating by claiming on Friday that he should have been awarded gold. Picture taken February 18, 2010. REUTERS/David Gray (CANADA) (Reuters)
--

JJ Thomas not only made it to his first Olympics; he was the favorite to win the first gold medal ever given in his sport.

Snowboarding debuted as an Olympic event in the 2002 Winter Games in Salt Lake City. Thomas, who was 15 when he catapulted to the spotlight as one of the youngest professional snowboarders, was poised for a fierce performance in the men's halfpipe competition. Indeed, Thomas found his way to the medal stand. The American team swept the medals in his event -- but Thomas had the bronze one around his neck. He finished four points behind the gold medal winner, and less than half a point behind the silver.

"I was so mad I didn't win, I didn't enjoy it that much," Thomas said. "I was so young, so competitive. At the time, I was so wrapped up in the moment and so disappointed."

Looking back, Thomas said he felt "OK" about his Olympic performance and increasingly pleased with his experience. He wants, however, to get back and "get the deal done." But he'll have to wait: As the sport has popularized and become more competitive, Thomas missed out on the 2006 and 2010 snowboarding teams. Now 28, he sits as the first alternate in this year's games.

What does it feel like to spend your life training in your sport, to be at the top of your game, to come so close to the gold medal in the most prestigious of international athletic competitions, a competition that's reached mythic proportions in the public imagination -- and then to leave as second or third best?

In 114 years of its modern history, the Olympic Games are haunted by stories of silver and bronze medalists. There are heartbreaking almosts and might-have-beens. There are the best of the best having their legacies written as "incomplete" when they lack a gold medal. (Here's looking at you, Michelle Kwan. How's it going, Debi Thomas?) Bode Miller finally got his Olympic gold this year, but the games are filled with those who stumbled on the way to the podium: Evgeni Plushenko, who failed to nab the top spot in men's figure skating a second time; Martins Dukurs of Latvia, heavily favored to win gold in skeleton. Too often for these athletes, more attention is put on what has slipped away from them than what has been won. And that's to not even mention the millions of dollars in endorsement deals and sponsorships that ride on the Olympic gold medals.

Competing in the 1988 Summer Olympics in Seoul, Kevin Asano has a heartbreaker of a tale: He missed out on a gold medal in judo because of a controversial half-point penalty. It was his first and only Olympics.

Asano had an unusual journey to the final match. His first bout was against a Czech competitor. As Asano stepped out onto the mat -- fully aware that "I could go up there, in three seconds get thrown, and that's the end of my career" -- he was surprised to find the audience of about a thousand Koreans booing him. As Asano went on to win his matches against competitors from Hong Kong and Thailand, the unanticipated booing continued. But when Asano took on the reigning gold medal holder from Japan, the crowd chanted in support of him: "U-S-A!"

"I thought to myself, there's no way I'm losing," Asano said. "I have all Korea behind me."

And in a tight match that ended in a split decision, he did -- and advanced to the gold medal round. Asano has come to realize that the Korean response to him was rooted in the nation's feelings toward Japan, dating back to World War II. As a Japanese-American, he earned the crowd's ire. But facing someone who was "more" Japanese, he was seen by them as an American.

But that boost of support was a mere memory when Asano faced Kim Jae-Yup of South Korea in the finals.

There were was no booing this time; the crowd chanted Kim Jae-Yup's name -- though to Asano, it sounded like "kill that bum."

The match began. It was remarkably close, when ultimately the South Korean went in for a choke and Asano grabbed his finger -- costing him a controversial penalty and the match. Kim Jae-Yup won the gold medal, and began to cry.

"I started walking back to the starting line with 18 years of training flashing before my eyes, thinking, 'I just lost at the Olympics,'" Asano said, despite his win of a silver medal.

"But hundreds of times before I'd seen myself winning the gold, playing it out in my head. I wanted to feel what it's like to be a champion. So I raised my hands as if I'd won, and I cheered and celebrated."

A newspaper captured the incongruous image -- the second place finisher cheering, the gold-medal winner weeping -- and, Asano said, published it with the headline: "Guess who won the gold medal? If you guessed the American, you're wrong."

Asano, who was then 25 years old, retired from judo after the Olympics. He now lives in Hawaii, where he's an instructor at a local judo center and recently published the book "Step Onto the Mat."

And he's become philosophical about the dissonance between the need for elite athletes to have intense, single-minded focus on their dreams while simultaneously needing to keep medal ambitions in perspective.

"It's not winning a gold medal that is important. It's what goes on inside you," Asano said. "It's a process each individual goes through. You have a dream that's way bigger than yourself. I was 10 years old and dreaming of one day going to the Olympics. And what you go through when you go for that -- all these years of working, getting thrown, losing so many times -- it's really what happens inside you that matters, and not whether you get the gold."

It's a sentiment that rings true for Garret Kramer. As the founder of Inner-Sports, a sports mentoring organization, Kramer insists that the inward experience of the athlete is fundamental not only to their sports performance, but to their satisfaction.

"The world will tell us that winning a gold medal is the ultimate, or a $10 million contract is happiness," Kramer said. "We know many people who win gold medals who crash and burn. There's no relation between a gold medal and contentment. None."

Likewise, Dr. Chris Carr has seen how much depends on how elite athletes mentally meet their circumstances. Will they celebrate second-place, like Asano, or be unsteadied by it?

"Any time you don't achieve your goals, there is grieving and loss," said Dr. Carr, a sports psychologist who has worked with the U.S. alpine skiing and diving teams at the Olympics. "But if an athlete is haunted by it as they prepare for next time, it is a powerful subconscious distraction. If you make a mistake, it's an intense emotional experience."

Carr added that every athlete at the highest level, "especially Americans," have their eyes set intently on first place. But the peculiar stage of the Olympic Games can offset even the more resilient competitors.

"Athletes do certain things to get to Olympics, and then the Olympics is such a spectacle, they change their routine," Carr said. He suggested that at this level, where immense talent and training is standard, the best performances simply come down to who handles distractions better.

The figure skater that was known for his uncommon quadruple jumps went home with the bronze medal in 2002 and failed to make the 2006 team. From his vantage as a retired skater now in his last semester at Columbia University and serving as an independent coach and judge, Goebel said the Games all come down to how people handle the expectations put on them.

"Everybody's super-talented, everybody's worked their whole lives," Goebel said. "I've heard of athletes who say they train constantly to the point of living like hermits. You can't put that much of yourself into a competition, or you'll crack. It's just about being able to keep it all in perspective."

For Goebel, it comes rather easily. He described his Olympic experience and third-place finish as a "wonderful experience."

"I like to compete, I had really good year (leading up to the 2002 Games)," Goebel said. "By the time I got there, I was ready. It was the best performance of my season."

Goebel said he didn't hold expectations of a gold medal.

"Because our sport is so political, I went in knowing a Russian would be first. It was 6-3 before I even got on the ice," he said. "It's one of those things that are part of the game."

After suffering hip, knee and back injuries in his fight to get back to the Olympics in 2006, Goebel knew he was a long shot to make the national team. Missing the cut was "devastating, but not unexpected."

Four years later, though, Goebel maintains his love of the Olympics.

"I'm obviously very excited about watching the Olympics," he said. "The only thing kind of stressing me out is that it takes away from studying. It's hard not to run home and watch five hours of the Olympics. There will be a lot of taking my laptop to class and checking scores.

Anna Clark's writing has appeared in The American Prospect, Utne Reader and Bitch, among other publications. She is the editor of the literary and social justice Web site, Isak.