All hail, lords of the ice dance! 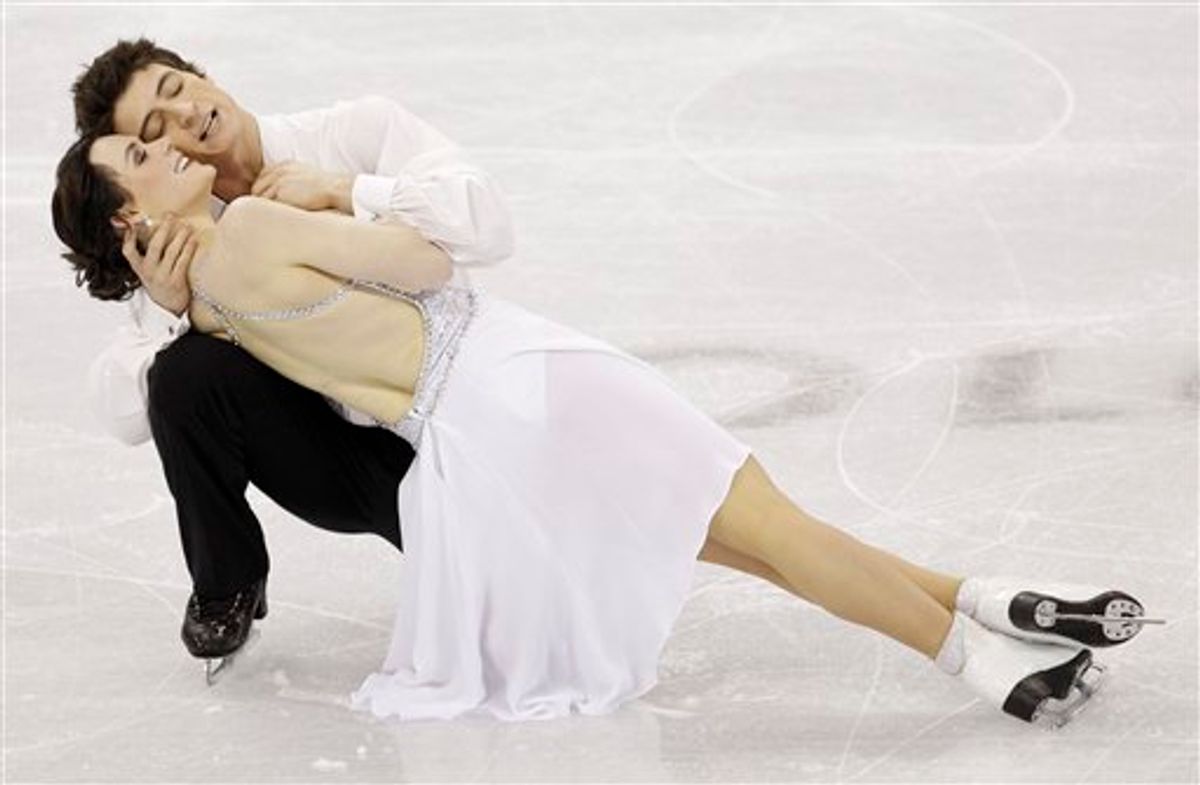 Is ice dancing a sport, or just a sexy distraction for folks back home who are burned out on watching figure skaters botch their quad jumps? Do figure skaters look down on ice dancers the way that vegans look down on triple cheeseburgers? Is ice dancing, like a triple cheeseburger, ultimately much more fun than tofu? These are the questions racing through the minds of the unhinged humans willing to stay up until midnight to watch plucky couples dressed as indigenous peoples rub their noses together while flying across the ice.

The answers must wait until later. In the meantime, here's Bob Costas on a sea plane, making jokes that only Al Michaels seems to comprehend or appreciate. Cue the Olympic music, and the glorious snowy mountaintops! Now we see bald eagles, sitting in the snow. What are you guys doing up there in Canada? Don’t be unpatriotic. You know you love curly fries, Jessica Simpson, and automatic weaponry more than you love good manners and nationalized health insurance. Fly back down to your homeland like nice little symbols of freedom and whoop-ass.

Time for team ski-jumping! The Austrians are heavy favorites. "Anything less than a gold for these Austrians is going to feel like a big failure." Isn't it interesting how the words "big failure" are never used when Americans are being discussed? Unfortunately, as a child of the '70s, during every single jump, all I can think of is that spectacular "agony of defeat."

Time for ice dancing! This is the final free skate segment. "Footwork sequences are like an ice dancer's quad," explains the announcer Tracy Wilson, presumably so we're not too disappointed when all we see is fancy footwork and no quads.

"Now they're doing their side-by-side twizzles!" Wilson says of one couple, trying to whip up some enthusiasm by employing dorky ice dancing terminology.

"A candy-ass sport," I reply, not bothering to correct him.

We cut away to men's freestyle aerials, qualifying rounds. This is not a candy-ass sport, that's for sure. Skiers fly up a ramp, flip and twist around and somehow spot the ground and land on their feet.

American Jeret "Speedy" Peterson is up next. "I am an adrenaline junkie," he tells the camera in a pre-taped segment. "I will do anything that has to do with adrenaline, and this gets my adrenaline pumpin' the most. There's nothing like being 55 feet up in the air, being upside down, and trying to land on your feet. It's not always happenin' that way, but you're tryin'." Peterson invented the hurricane: five flips, three twists.

"He has had a rough go the last few years, had personal struggles and issues that he has had to deal with," one of the announcers says. Isn't it interesting how the words "big drinker" are never used when Americans are being discussed? Doesn't it seem like every few seconds at the Winter Olympics, some announcer is suggesting in veiled terms that this or that competitor is something of a drunk?

"He [Peterson] says, 'Middle ground and me, we just don't get along,'" the announcer adds. But tequila and me? We hit it off like you wouldn't believe!

"Remember, he was sent home by the USOC from Torino citing conduct unbecoming an Olympian, so this is a nice return for him." My God, what did he do? Get naked and piss his name in the snow? So many tantalizing hints but no concrete facts being offered here.

Those "personal struggles," on the other hand, included, according to an article in Men's Journal, drinking, depression and a roommate who shot himself in the head while looking Peterson right in the eye. Oh, and then there was that half-million dollars Speedy won in Vegas one time, only to hand his buddies half of it and pay off taxes with most of the other half. With stories like these, where's this kid's "up close and personal" segment? American Olympians have to look virtuous and valiant, of course, so all we get is Speedy talking about being an adrenaline junkie.

After a few more jumps, Costas breaks in to tell us it's time to switch over to the lords of the ice dance.

We begin with Americans Emily Samuelson and Evan Bates. They skate out to the center of the ice, acting like they're madly in love all the while. She touches his face seductively. Really, how easy is it to respect an Olympic sport that entails acting?

Their song starts, and it's in a different language. Now that's very unlike an American team, to acknowledge other countries on the Earth that might have their own laws, governments, etc. Soon I find myself admiring their embrace of foreign lands -- and of each other! As I watch these two, I begin to believe, thanks to the art of ice dancing, that they might actually be in love. I hope to God that they are, in spite of myself. The magic of ice dance is already starting to melt away my prejudices! Either that or I'm getting tired.

Uh-oh, here's Sinead Kerr and Jon Kerr, a Scottish brother-sister team. Brothers and sisters can't pretend to be in love! They're ice dancing to Linkin Park. Harumph, said the old lady. "They try to make programs more about characters as opposed to a couple in love," explains Tom Hammond. Come on, dummies. What's ice dancing without love?

Here's the French team, Natalie Pechalat and Fabian Bourzat, to show us what ice dancing without love looks like. He is dressed as a clock. She is dressed as a woman who appears, through the art of the ice dance, to fear the passage of time. Even exuberant announcer Wilson pronounces their program "contrived." Another French team, Isabelle Delobel and Olivier Schoenfelder, aim to tell "the story of their careers" in their program. Hammond says they were world champions in 2008. I wonder how they'll depict that through the art of the ice dance? The Russian team, Jana Khokhlova and Sergei Novitski, step onto the ice. She is dressed as a circus performer about to be shot out of a cannon. He is dressed as a member of Whitesnake. Their program is not subtle, and it seems to last forever.

Finally, Americans Charlie White and Meryl Davis, who have skated together since they were tiny, are on the ice. They go to the University of Michigan together, and they say they never go out and drink at night. They chuckle about this, but you can tell that there's a Speedy Peterson deep inside Charlie who's feeling a little wistful over how much fun he might've had pissing in the snow all these years.

Wow, White and Davis are really fantastic! Their lifts are incredible, their spins are so fast! Their dance goes by so quickly, compared to the others. When the art of the ice dance is truly transcendent, it makes time itself speed up! (Maybe that's what that French team was trying to express!)

Finally Canadians Tessa Virtue and Scott Moir step onto the ice, and the place goes wild with polite affection. Virtue and Moir are very good at acting like they're madly in love before their program, which I dislike and heartily approve of at the same time. Virtue has gigantic saucer eyes, a nice touch. She's also incredibly graceful, and holds herself like a true dancer, shoulders back, perfectly poised every second she's on the ice. This pair share coaching/choreography team Igor Shpilband and Marina Zueva with Davis and White, and you can see it in the innovation and furious pace of their lifts. Their stunts and their fluid movements are simply breathtaking, and not in the least bit clown-show or candy-ass. We end with a close-up on their beautiful smiling faces. "Absolutely exquisite," proclaims Wilson. If they don't win gold, I'll be stunned. Their score is 110, their season best. Go, North America! The crowd roars.

Oh dear, Americans Tanith Belbin and Ben Agosto are next. This is a pretty terrible time to skate. Tanith looks like she escaped a burning building in her nightgown, only to be attacked by an angry mob armed with Bedazzlers. Ben is wearing Liberace's favorite low-cut white jumper. They're ice dancing to a drippy version of "Ave Maria" and their skating seems uninspired after Virtue and Moir. There's also a lot of irritating acting and gesturing that swings toward the hokey, aboriginal, clown-show side of the ice dancing world.

"When did they do their Twizzlers?" my confused husband asks.

In a premature interview, Tessa Virtue actually thanks Canada for her fine performance. Oh dear, how impolite of her not to thank North America as well!

Here comes Oksana Domnina and Maxim Shabalin, the Russian team whose distasteful aboriginal program shocked the Western Hemisphere on Sunday night. Apparently in addition to wearing little haunted faces painted onto their torn nightgown/Whitesnake outfits, they're also bound in ropes that they use to hoist each other during their program. Announcer Wilson hints that this is pretty obviously no-fair. But we can already tell that these two don't stand a chance -- they look all big and clumsy compared to the Canadians, all elbows and bad transitions. Boo, Eastern Hemisphere!

"Look, he's hauling her around by those straps!" says my outraged husband.

In the end, Virtue and Moir win gold, which is only fair and right, and Davis and White take the silver, which is exactly how it should be. Americans Belbin and Agosto are edged out by Russians Domnina and Shabalin for the bronze, which is your typical almost-evil nudging out just-slightly-good scenario that no one can be bothered to lose sleep over.

Later, at the medal ceremony, I can't take my eyes off Virtue and Moir's smiling, thrilled faces as they relish what may represent the best moment of their lives. Caught up in their joy, I weep openly to the strains of "Oh, Canada!," which may represent my own personal low.

But then I remember that I love curly fries, automatic weaponry and freedom much more than I love good manners, saucer-eyed ice dancers and Canadian bacon, so I pull myself together.