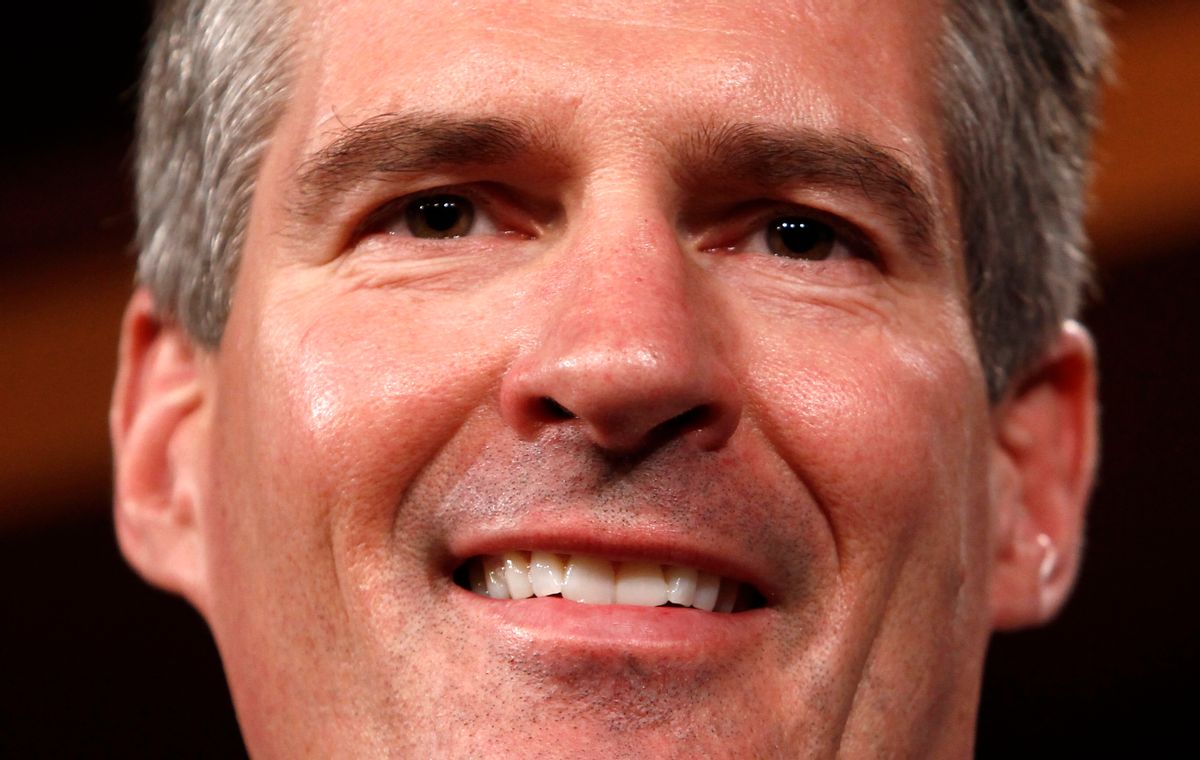 Scott Brown’s skillful mimicry of populism was what originally endeared him to the tea party gang. They loved him, too, because he was prone to make a stupid remark now and then that reflected their own prejudices perfectly, as when he suggested that Barack Obama was born out of wedlock -- or when he compared his supporters with the lunatic who flew an airplane into the Austin IRS headquarters.

But today thousands of Brown’s most fervent fans have  realized that he is actually everything they despise: a Republican in Name Only, a Benedict Arnold, a Massachusetts liberal, probably a Marxist. And they brought the bile to sites across the Web:

“Scott Brown is a lying douchbag--- just wait and see!”

“Yo Scott Brown…Always knew you were a lying RINO!”

Why? Because he voted for the stripped-down, tax-cutting, locally oriented and essentially conservative jobs bill pushed by Senate Majority Leader Harry Reid. Cyberspace has been aflame all day with furious outbursts by wingnuts who believe that Brown let them down.

Reading their posts on Brown’s own Facebook page, it is clear that many of them have no idea what is in Reid’s jobs bill, nor do they much care. Cutting taxes for small businesses and helping governments pay for bonds to build infrastructure is denounced as akin to communism -- solely because the bill is sponsored by the Democratic leadership. Of course, the Senate minority leader and all but four of Brown’s fellow Republicans essentially adopted the same position (which indicates that they are eager to obstruct any Democratic legislation, even if it simply mirrors their normal policy preferences).

None of this should come as a surprise to Brown or his erstwhile admirers, however. In what is otherwise an off-putting puffy profile in the New York Times Sunday magazine, Frank Bruni  takes brief notice of the new senator’s shifty record as a Massachusetts legislator:

"He’s a self-proclaimed fiscal conservative who opposed a suggested state tax cut; a proponent of abortion rights who fought hard (and unsuccessfully) to allow Massachusetts doctors with religious objections to deny emergency contraception to rape victims; a hero to the Massachusetts Audubon Society who has voiced skepticism about global warming...

(In what was probably his final appearance before a throng of adoring wingers, Brown showed up at CPAC to introduce Romney -- who isn’t likely to ask him for that kind of favor again.)

The more cynical professionals on the right -- including several prominent bloggers -- naturally saw Brown’s vote to end a filibuster on this jobs bill as a harmless political feint toward the center. But this isn’t the last jobs bill that the Democrats will push before November, and they may even propose serious legislation that would actually affect more than a fraction of a percent of GDP. The progressives at Americans United for Change aired a TV ad in Massachusetts last weekend,  demanding that he vote like a bipartisan independent, as he promised the night he won. Pressure from labor and progressives will push Brown to cast many more votes that enrage those who once idolized him.

The sexiest Republican had better learn to enjoy the hate. There will be much more of it coming his way.