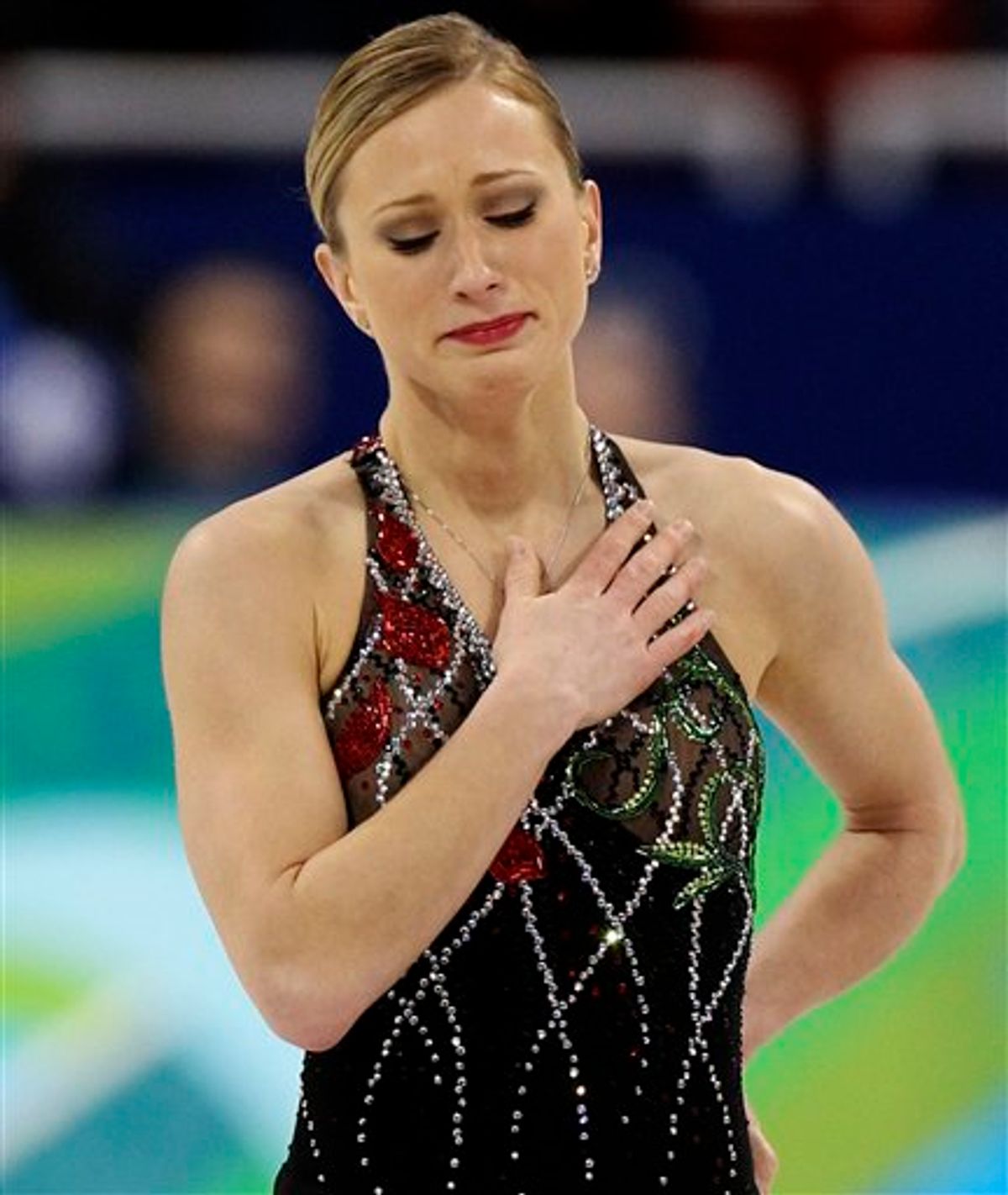 There is little straightforward about figure skating. It is, instead, a sport of parabolas, of giant curves carved on oval ice, of spirals sparklingly etched in air. It is oblique and obscure in other ways too. Unlike bobsledding, wherein the rubric is time (the less of it the better), or ski jumping where it is distance (the more, the merrier) or, say, ultimate fighting, where success is measured in teeth missing of a beaten foe, the criteria for judging figure skating is not immediately apparent to the common man. Much of the technical nuance that determines who goes home and into history with a gold medal passes by the layman viewer unnoticed. The codex of skating law is Byzantine, rarified and known to few.

Still, last night's Women's Short Program was a joy to watch. When we don't know facts, we tell ourselves stories. Our eyes, unhindered by expertise, can nevertheless discern the line of beauty and if not the line, at least the curve.

Sensing our need for narrative, the producers happily obliged. In the early going, during the routines of those deemed unable to podium, the announcers -- Scott Hamilton and Sandra Bezic -- happily trounced down the path of after-school special new historicism. We heard very little about Cheltzie Lee's axel, though we did learn her father is Chinese, born of Dubai, and her mother is African-American, a daughter of Louisiana. (Also, her song for those of you who are interested, was an instrumental version Michael Buble's already neutered cover of Nina Simone's classic, "Feeling Good.") Though Hamilton and Bezic had little to say about the technical elements of Turkish skater Tugba Karadamir's routine, her mother, we know now, is an aerospace engineer and her father owned several restaurants in Turkey before moving to Canada to work menial jobs. Admittedly, there wasn't much to hold on to during these routines but the athletes were there to tell their story on the ice. They deserve to live or die by their clean triple/triple combinations. Fortunately, the judges seemed immune and unsympathetic to the non-diegetic, a coven of unfeeling arbiters and all the better for it.

At first American Mirai Nagasu seemed doomed to the condescending fate of her predecessors. Her parents own a sushi restaurant. She slept in a storage closet. Her mother has thyroid cancer. I might be crass -- in fact, even I think I'm crass -- but I don't care about her mother's cancer or about their restaurant Kiyosuzu (though the debate over its quality on Yelp is endlessly entertaining). My interest is in Nagasu's skate. Though I might not understand the import, I want to know if she under-rotated her triple/triple combination (she didn't). Thankfully, after an initial burst of narration, the announcers yammered down and let Nagasu's skating shine through. That girl is bendy and sparkly and that's all I know how to say about her program. She can spin, while peeling one leg from the ice and letting it float upwards like a fern tendril unfurling and she spun so hard she bloodied her nose. Call me an old codger of a new critic, but the joy ignited by her smile -- her real smile, not the pre-skate simulacra -- needs rely on no external context for its emotive power.

But of course, last night's protagonist wasn't Nagasu, who now stands in sixth place. It wasn't even the breathtakingly perfect performances by South Korea's Kim Yu-na or her Japanese nemesis Mao Asada, both of whom skated flawlessly, Kim in sparkly James Bond attire and Mao in a bizarre bordello-chic lace get up. A whole treatise could be written about a Japanese girl's decision to embody an Englishman's dick-guided construction of hypersexualized Japanese woman but here's not the place. The night belonged to the Canadian skater Joannie Rochette in whom the twinned threads of life off the ice and life on the ice naturally, albeit tragically, were entwined.

In one of those off-putting fireside chats with Bob Costas, we learned Rochette's mother had died unexpectedly of a heart attack on Sunday. Sitting across from Dan Jansen, the American speedskater whose sister Jane died hours before his race in 1988, (his story is told in under 30-seconds in Visa's Go World ads) Costas swelled with empathy, repeating back to Jansen the fleeting moments of his sister's life. "She was on her bed; she couldn't speak to you but she could listen. Your brother held the phone up to her…." Nothing seems more barbarous torture than having Bob Costas repeat back to you tragic or important moment in your life in his profane, professional voice. Phrasing the most sincere and cherished memories so polished they come off as phony Kewpie Lifetime dramas. He's a crap prism, taking in light and refracting dime store rainbows.

But despite Costas mawkish sentimentality, Rochette's obvious emotional vulnerability couldn't help but stir. Rochette had become Perseverance incarnate. Onto her sequined rose dress were pinned the hopes and needs of the minions whose hearts had been hurt and who yearned for redemptive resonance. She was no longer an athlete but a mascot for the human condition.

Thankfully, Rochette's music wasn't ridiculously overwrought Europop or the tinny phony flapper jazz of American Rachel Flatt. She danced instead to Gerardo Matos Rodriguez's 1917 tango classic "La Cumparasita," as emotive a piece of music as there ever was. Her skate was like something from a Pedro Almodovar movie. It was 2 minutes 50 seconds of sustained passion and of formalized pain. Great eddies of pathos swirled under the ice on top of which Rochette glided. Her bright red lips pursed in concentration, Rochette didn't smile fakely nor concede to the tide of her woe. She skated seriously, expansively and confidently. She landed her combinations without under-rotation. She did exactly what she had trained to do. In her spins, she gathered her limbs unto herself and spun faster and faster, wrapping her story and her loss about her. And finally, flinging her limbs out and planting her toe in the ice, she stopped and gave it all away.