Unmade in Japan: Toyota on trial

Besieged by grandstanding politicians, Akio Toyoda said he was sorry, again and again. But the damage is done 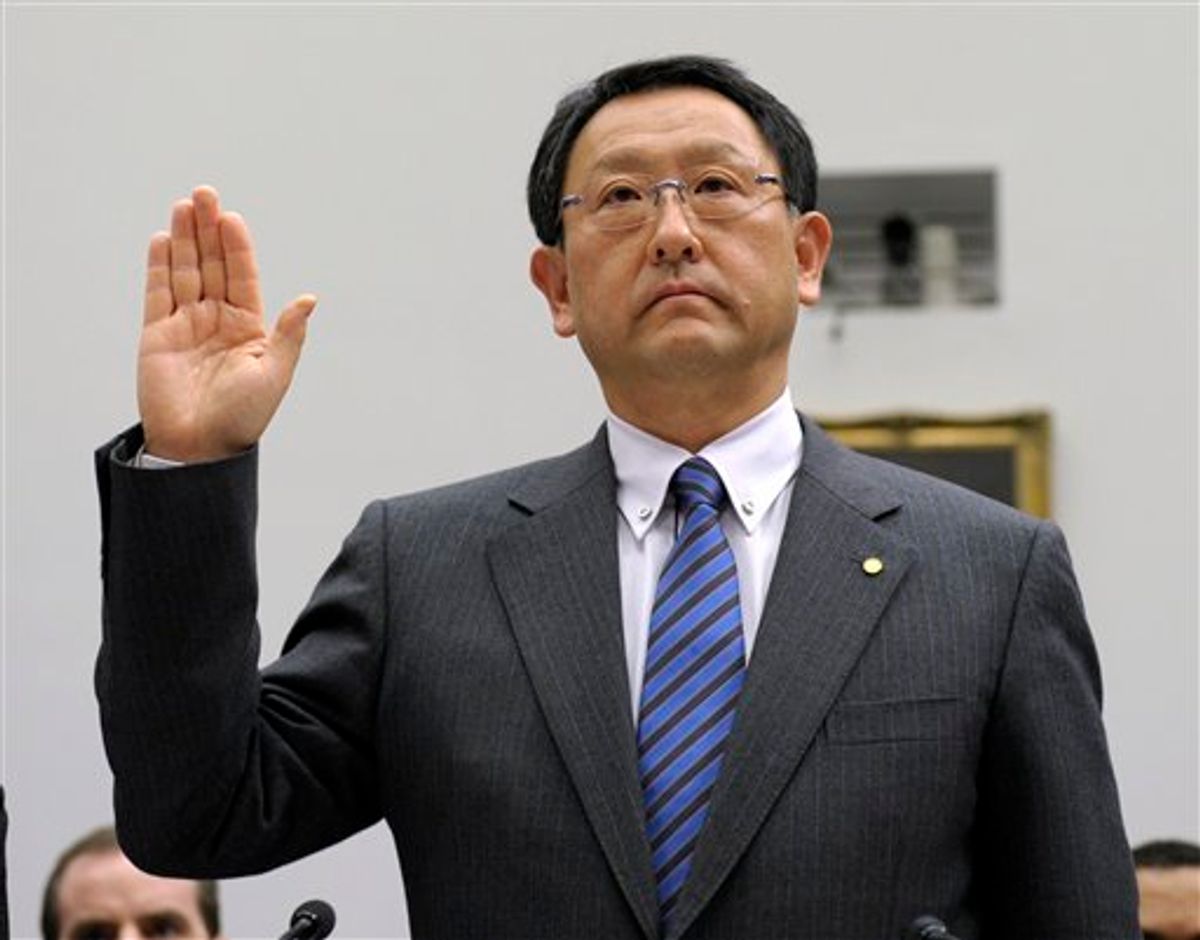 Toyota President and Chief Executive Officer Akio Toyoda is sworn in on Capitol Hill in Washington, Wednesday, Feb. 24, 2010, prior to testifying before the House Oversight and Government Reform Committee hearing on Toyota. (AP Photo/Susan Walsh) (AP)
--

If there is any single takeaway from the appearance of Toyota's Chief Executive Officer Akio Toyoda before the House Oversight Committee on Wednesday, it is that Japanese executives are just as adept as American business leaders or government officials at failing to recall what they knew and when they knew it. Toyoda and his colleague Yoshimi Inaba, President of Toyota's North American division, were clearly mindful of potential legal pitfalls, and consistently expressed what some might find a surprising level of ignorance about specific memos, meetings, and anything else that might have to do with documenting when Toyota became aware of the problem of "unintended acceleration" in Toyota cars. (Or, as an angry Marcy Kaptur, D-Ohio, exclaimed, "sudden death acceleration.")

The only difference? Toyoda and Inaba appeared more sincere than your typical American in their embarrassment at not being able or willing to remember anything substantive. Whether that reflected cultural differences or simply a lack of experience with the political theater of a standing-room-only Congressional hearing is hard to say. The whole event had a distinct feeling of culture clash, with American aggressive political posturing smashing into Japanese demure saving-face subtlety, accentuated by Toyoda's inability to speak English, which required repeated pauses in the action while the CEO had questions translated for him, responded in Japanese, and then had his answers translated.

In hearings that are sure to attract a significant television audience, every legislator considers him or herself a prosecutor with five minutes to prove the defendant guilty. (Unless of course, you have Toyota manufacturing plants in your district, in which case you are considerably more friendly.) And to be sure, there's plenty of grist to crucify Toyota with. The company did its best to co-opt the American regulatory process, appears to have known about problems long before acknowledging them in public, and seems to have dragged its feet on recalls. As a result, Toyota's going to have some big legal bills in the years ahead.

But aside from looking good to any constituents watching on TV, it's hard to see what the committee members accomplished via this process.

You could, if you wanted, try to score some political points, as when a smirking Jason Chaffetz, R-Utah, tried to get Toyoda to blame American unions for his company's problems. Or you could, like Eleanor Holmes Norton, D-D.C., get in a dispute over whether Toyota cars made in the United States should be considered American or Japanese. If you were a Republican, you were likely to try to implicate the Obama administration's bailout of Detroit in some way, though no one could quite figure out how to make that charge stick.

Perhaps the larger meaning of this hearing was simply its recalibration of what Toyota -- and Japan -- signify to Americans. At the outset, Paul Kanjorski, D-Pa., commented that Toyoda was about to have "a unique experience" withstanding "the interrogation of a Congressional committee." The possibly unintended symbolism -- Toyoda as a prisoner of war -- neatly inverted longstanding images of all-conquering Japanese technological superiority, particularly as expressed in the auto industry.

In a country that has long been embarrassed by its own auto companies and is probably exhausted by the never-ending stream of American business leaders summoned to Congressional hearings so we can all hear their unsatisfying explanations of how they screwed up, the focus on Toyota offered an opportunity for some schadenfreude. Finally, someone else is bungling on a massive scale!

Because whether or not Toyota is found legally liable of covering up problems with its vehicles or not acting quickly enough to address them, there's no denying that Toyota's image has been severely damaged. Paul Kanjorski observed that the slogan "Made in Japan" has long conveyed a sense of the highest quality, but he told Toyoda that "you've injured that thought process in the American public."

On that count, Toyota does appear guilty.

How The World Works Toyota