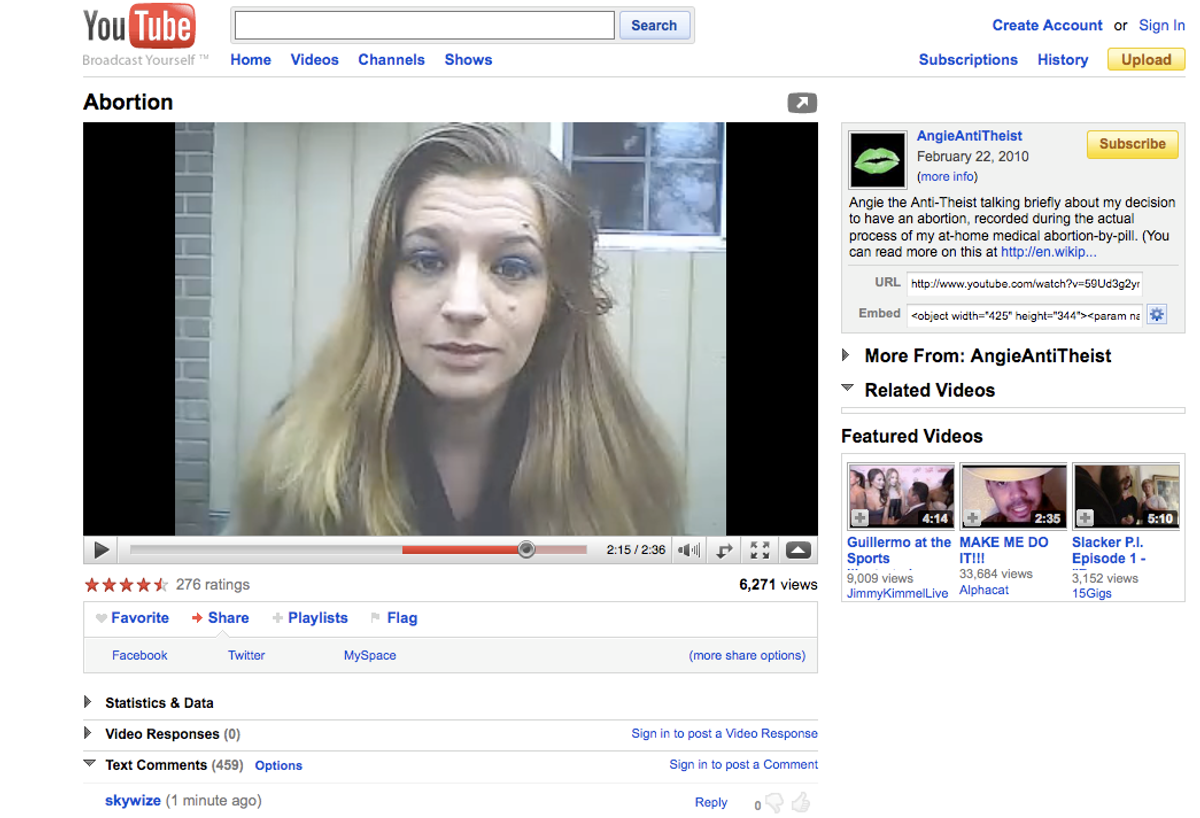 That headline sure got your attention, now, didn't it. Just when you thought the formula of "so-and-so tweets [insert shocking thing]" had been thoroughly exhausted, along comes blogger Angie Jackson to live-tweet her abortion. When I came across news of this seeming stunt, it conjured in my head an image of a woman groggily wielding her smart phone while lying on an operating table, but that isn't the case. Jackson was in her fourth week of pregnancy when she decided late last week to take the abortion pill RU-486 and ever since she has chronicled her experience on Twitter under the hashtag #livetweetingabortion.

Jackson, the mother of a 4-year-old special needs son, found herself in this predicament after her IUD birth control failed and she explains that her decision to abort was based on financial strain and her high risk of complications. But, she also makes sure to add in a blog post that "'I don't want to be pregnant' is a *good enough* reason to get an abortion." Naturally, her tweets are attracting anti-choicers like bees to honey and she is indefatigably swatting them away rhetorically. It's an impressive sight to behold -- but her point isn't to rile conservatives.

Instead, she explains in a YouTube video pasted below, her aim is to remove the shame and "demystify" the experience of terminating a pregnancy, "so that women know, hey, it's not nearly as terrifying as I had myself worked up thinking it was." She says, "It's not that bad, it's not that scary. It's basically like a miscarriage." (Remember, we've already written about a woman who tweeted her miscarriage.) In her Twitter feed, she talks spotting, nausea, cramps and Vicodin. She doesn't make it sound like a walk in the park -- and of course it isn't, her body is working to expel the embryo from her uterus -- but there is something reassuring about how she matter-of-factly walks us, and herself, through the whole process. It's as though she's live-tweeting the aftermath of a routine medical procedure, like a wisdom tooth extraction.

In fact, before I went in for what felt like terrifying oral surgery to remove a backasswards tooth from my sinus cavity -- freaky, right? -- I went on YouTube and watched footage of similar procedures and video blogs of people's recovery process. It replaced all of my far-fetched nightmarish visions with concrete, factual information. Without that, I might have gone running for the hills -- or at least passed out in the waiting room. Considering that abortion is so prone to politicized distortions and outright lies, Jackson is doing women a real favor. This isn't another case of overshare-itis, it's an example of how amid all the frivolous cacophony of Facebook, Twitter and the like, some folks are, like, actually doing good. Oh, Internet, you enigma you.