In "A Single Man," the dapper Brit pulls off one of acting's toughest feats: Subtlety 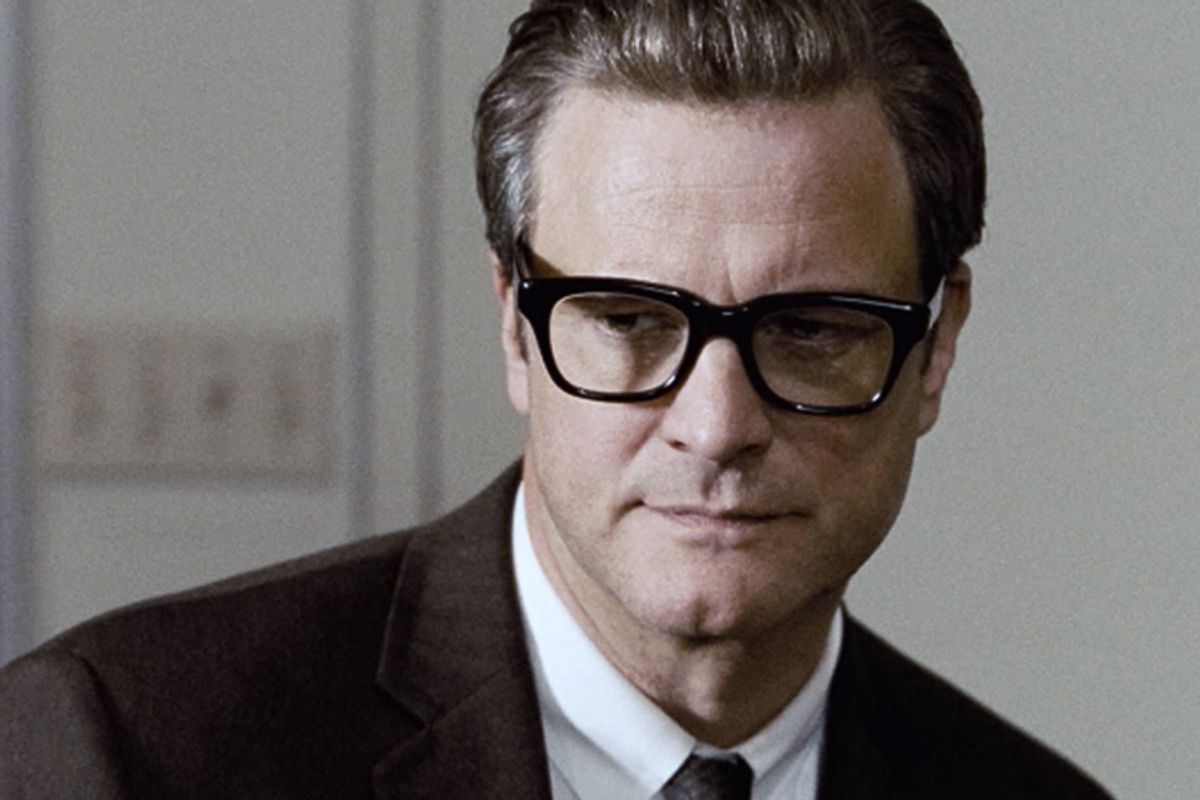 One of the movie posters for Tom Ford's "A Single Man" is a gauzy photo-illustration featuring a debonair-looking Colin Firth in the foreground -- deep in thought and wearing heavy-rimmed Michael Caine glasses -- as Julianne Moore, a '60s glam queen in a black sheath dress and dangly cocktail-party earrings, looks on with undisguised affection and possibly a shiver of lust. A soft-focus white rose blooms just behind Firth's right ear, a symbol of mourning, or rebirth, or something. It's a dreamy, aesthetically pleasing work of advertising, a respectful nod to the glory days of movie-poster artists like Bob Peak.

This is very elegant advertising for a movie about grief that, if Ford had chosen a different star, might also feel like advertising. Ford has worked as an art director and a fashion designer (for the houses of Yves Saint Laurent and Gucci), and in those fields, his aesthetic sense has proved to be extremely well-turned. But as a piece of moviemaking "A Single Man" -- based on the 1964 Christopher Isherwood novel in which a middle-aged literature professor mourns the death of his lover -- is static and sterile. Ford knows something about composition and lighting, perhaps a bit too much. If it weren't for Firth, its star, "A Single Man" wouldn't amount to much more than a series of meticulously art-directed stills, less a movie than a lavish 10-page promotional insert in Vogue.

But Firth is the great disruption in Ford's design scheme; he brings a distinctly human touch that nudges the movie over the line from window dressing to drama. Firth's George isn't a flashy mourner. There are no histrionics here, no melodramatic breakdowns. Instead Firth does something much more difficult: He limns the negative space of grief, giving it a distinctive shape and heft. Early in the movie, he learns of the death of his lover, Jim (Matthew Goode), via a telephone call. He's also informed -- with as much kindness as the caller can muster -- that he isn't welcome at the funeral; Jim's family doesn't wish to acknowledge him. (The movie, like the book it's based on, is set in 1962 Southern California.)

As George processes the information, there's no immediately visible change in his expression; if his eyes show a flicker of sadness, it's hardly detectable. Firth pulls off one of the most difficult feats for an actor, drawing his character's feelings to the surface in increments you could measure in microns. That is to say, he shows emotion without expressing it.

Firth's supple sense of reserve is one of the more delicate aspects of the picture: Even in the early part of the 21st century, when we've all come to recognize that it's OK for a man to cry, there is still something deeply moving about a man who won't, or can't. And throughout the movie, Firth builds upon that unwillingness to show emotion, which is itself deeply emotional. It's not that George wears his sorrow as a badge of traditional manhood; instead, it's something that's taken root deep inside him -- it's become a component of his lifeblood, and of his sexuality. When he flirts with one of his young students (Nicholas Hoult), a last-ditch effort to extract some joy out of life, the undertow of his grief pulls him back. But his anguish also seems to give him a sense of belonging to something greater -- perhaps more a sense of belonging than a middle-class, middle-aged gay man in early-1960s Southern California, living among neighbors whose identities are locked up in the mom-dad-kids equation, would be likely to feel in everyday life.

Ford's filmmaking is pretty to look at, but it's cold. It's Firth who radiates all the warmth here, and his performance is all the more remarkable for the way he wraps that warmth inside his dignified reserve, like a protective blanket. He flirts mildly with his best friend, Charley (Julianne Moore), a woman who knows him almost better than anybody else does and who hints that she'd like their relationship to work in the "conventional" way. He humors her, to a point. But his frustration with her ignites into a flash fire when she hints that his relationship with Jim was somehow less meaningful, less real, than a heterosexual relationship would be. It's one of the few moments in "A Single Man" when Firth's George loses his cool, albeit in a characteristically restrained way.

And let's not forget the look of him: Ford, whatever his faults as a filmmaker may be, sure knows how to dress a guy, and Firth slips into George's dapper-academic wardrobe with ease. We see him in trimly tailored suits, with those narrow, slightly too short (by today's standards) pants and vaguely boxy jackets. The look is modern but not yet mod: In a few short years, free love -- not to mention Stonewall -- will change everything, particularly for men and women who are younger than George is. But for this moment Firth's George, in his grief, has everything and nothing. He is, as Elvis Costello once sang, a man out of time, and Firth makes that painful nowheresville feel desperately real.