Ode to the fallen Hummer 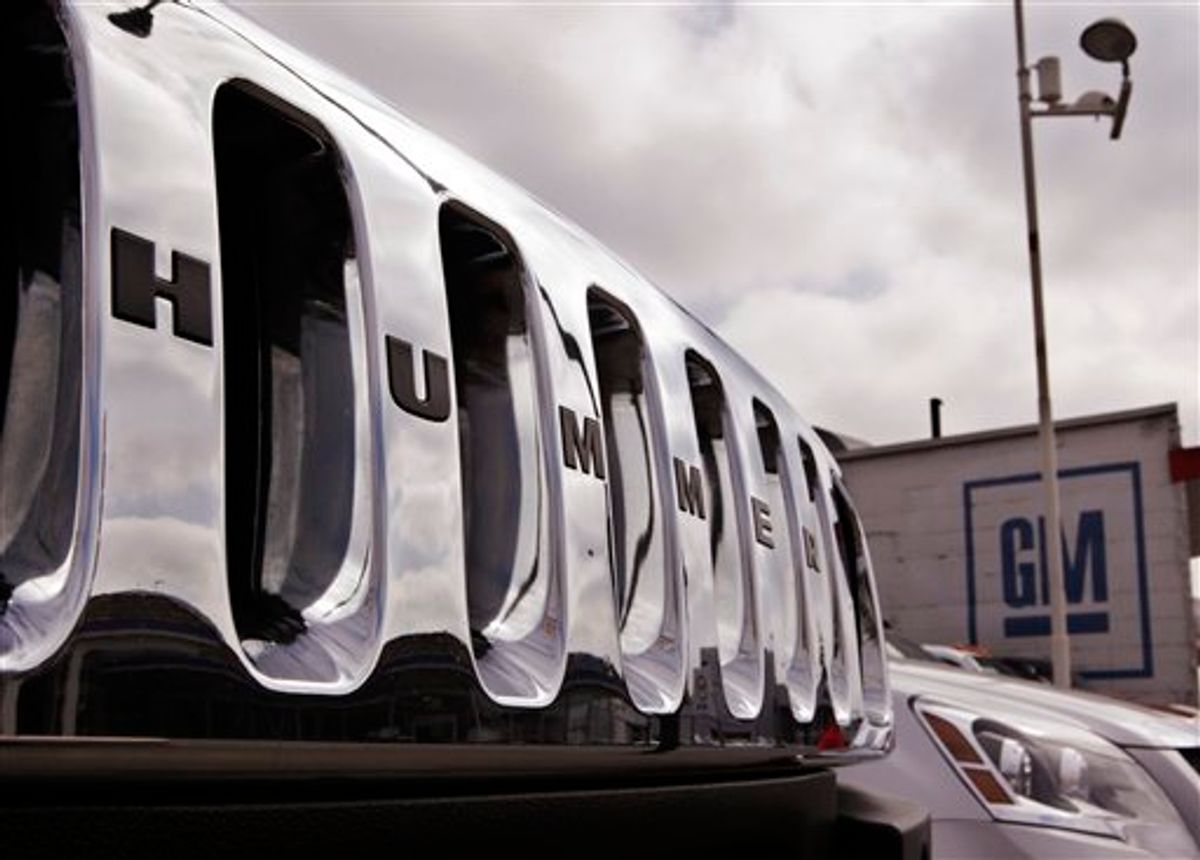 FILE - In this Oct. 9, 2009 file photo, a Hummer is seen on display at a Hummer dealership in Burlingame, Calif. General Motors on Wednesday, Feb. 24, 2010 said it will discontinue Hummer after its bid to sell the brand to a Chinese company failed. (AP Photo/Paul Sakuma, File) (AP)
--

How low has the Hummer brand sunk? China, a country whose water and air pollution beggars description, a country that is the world's largest consumer of coal and the planet's biggest greenhouse gas emitter, a country where conspicuous consumption by newly affluent millions is considered a long-denied imperial birthright, cannot stomach the idea of bringing into its industrial fold "the poster child for American gas guzzling extravagance."

The quixotic dreams of the Sichuan Tengzhong Heavy Industrial Machinery Co. have been dashed. The company could not get regulatory approval from the Chinese government. On Wednesday, General Motors announced that Tengzhong "was unable to complete the acquisition." GM didn't spell out the reasons, but on Thursday China's government made clear its own opinion.

Tengzhong hasn't provided China's Ministry of Commerce with a reasonable purchase plan and the government seeks to encourage renewable, green and environmentally friendly energy consumption, Yao Jian, spokesman for the ministry, said at a briefing today in Beijing, without elaborating.

When a country burns as much coal as China does, it's a real slap in the face for a business deal to be quashed because it's insufficiently green. It's also an invitation to accusations of hypocrisy. China's state-owned oil conglomerates certainly haven't been discouraged from snapping up oil companies and drilling rights all over the world, even though there is nothing "renewable, green and environmentally friendly" about oil exploitation.

But oil and coal are critical to Chinese economic growth. Hummers are not. So by rejecting Hummer, a brand whose whole point is to evoke grandiose excess, China gets to make a symbolically significant gesture at very little cost.

The L.A. Times quotes Dan Becker, director of the Safe Climate Campaign, as saying that "Closing Hummer simultaneously improves the health of GM, China and the planet. Hummer should rest in pieces. " It's a snappy sound bite, but as far as the world is concerned the closing of Hummer is meaningless compared to the relentless year-on-year percentage growth of auto sales in China. The planet won't even notice Hummer's exit.

A few thousand American jobs will disappear if Hummer closes down, and that's not a symbolic event for the families affected. But for the rest of us, the main reason why we pay attention to the company's fate is the brand's extravagant realization of America's cherished bigger-is-better mentality. If Joseph Stiglitz is right, and the two decades from the end of the Cold War and the Great Recession will be remembered as the era of "American triumphalism,"  then what better calling card to remember that bygone time than the image of  a Hummer (or two) parked in front of a McMansion?

That era is over. How interesting is it to see that China, of all nations, gets to finally slam the door shut?