"Cop Out": Tracy Morgan breaks out

In this buddy-cop comedy, Bruce Willis looks on, amused and a little confused, as his costar works his nutso magic 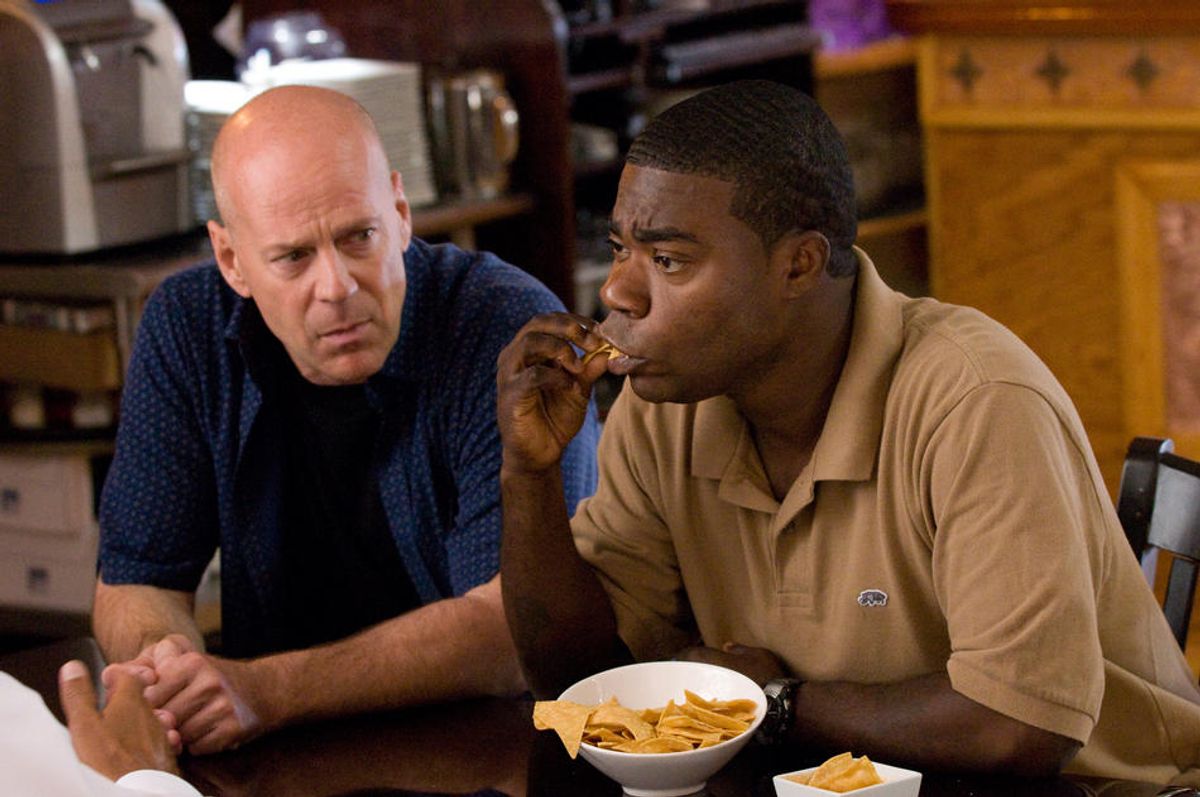 Bruce Willis and Tracy Morgan in "Cop Out."
--

Bruce Willis may be the big star of Kevin Smith's buddy comedy "Cop Out," but just a day or so after seeing the picture, I can barely remember him. What resonates instead is the way his costar, Tracy Morgan -- the two actors play New York City detectives who've been partners for nine years -- responds when an angry higher-up tells the duo that the undercover bust they've recently botched is all over YouTube. "The YouTube?" Morgan responds, his eyes open wide and unblinking, wanting to be sure his sudden fame is the real kind and not some cheap imitation.

That's the kind of gag only Morgan could get away with, and even then only some of the time. Morgan's humor is the boomerang sort. His jokes make no sense if you face them head-on; to work at all, they have to swing around and hit you on the back of the head, and still they sometimes fall short of their wobbly mark. In the characters he's played -- from a vulnerable, loose-cannon prima donna on "30 Rock" to "Saturday Night Live's" Brian Fellows, an animal-show host who ignores his guests in favor of happily following the imaginary conversations running in his head -- Morgan's humor has a powdery innocence, with just a flash of exasperation gleaming at its edge. He's sweet, but you also suspect he could blow at any moment.

With "Cop Out," Smith, working from a script by Robb and Mark Cullen, builds a reasonably effective framework for that humor, at least part of the time. The plot, as is usually the case in buddy movies, hardly matters: Willis' Jimmy Monroe and Morgan's Paul Hodges are suspended without pay as punishment for that aforementioned bungled bust. Immediately thereafter, Jimmy learns that his daughter, Ava (Michelle Tractenberg), is about to be married, and to pay for the wedding, he hopes to sell a prized baseball card (it's a '52 Pafko, in case you're curious). Before he can do so, the card of course falls into the wrong hands. Meanwhile, Paul has become preoccupied with the notion that his wife, Debbie (Rashida Jones), is cheating on him, an obsession that he pursues doggedly with the help of a teddy-bear nanny cam.

There are also a pair of rival hot-shot cops (played by Kevin Pollak and Adam Brody), a stoner memorabilia-store robber (Seann William Scott) and a baseball-obsessed gang leader (Guillermo Diaz), and in the end that just might add up to too many characters: "Cop Out" is overly cluttered and busy, and in characteristic Smith fashion, it's longer than it needs to be. (No one needs a buddy-cop movie that runs 110 minutes.) The picture is unapologetically junky and dumb, though every once in a while it does make you think that at least a small apology would be nice. Instead, Smith and the screenwriters keep trotting out one limp gag after another, including a foul-mouthed child car thief and a parkour routine that ends in a splat.

And yet there's pleasure to be had in watching Willis and Morgan natter and bicker. Willis is the good sport here, the stolid, straight bridegroom to Morgan's blushing, nutso bride. He strides through much of the movie wearing a look of amused exasperation: He doesn't seem to know exactly what to make of Morgan, but he's happy enough to bask in the comedian's zigzaggy glow. Jimmy looks on, bewildered and appalled, as Paul tries out some tough-cop interrogation techniques boosted not just from "Heat" and "Training Day" but from "The Color Purple" and "Schindler's List." (When Jimmy accuses Paul of "stealing" these riffs, Morgan insists, with a sniff, that what he's doing is "homage," which he of course pronounces "hommij.")

And just when you think Morgan has only one note to play, he surprises you with a moment that seems crazy but isn't. When he sees Jimmy's newly engaged daughter Ava, he rushes toward her and folds her in his arms, wearing a look of rapturous joy that I've thus far seen only on the faces of those stuffed animals that hug each other with the help of Velcro paws. "I love you like the fat kid loves cake!" he tells her, his face lit up with irony-free happiness. The line itself isn't clever or funny, but Morgan's use of it as a deeply affectionate greeting is completely original. In that small moment, Morgan transcends the wayward silliness of "Cop Out" just by going for the gusto. He grabs it, and he hangs on.