Why Pelosi can't just get rid of Rangel

The ethics committee is set to report that Rep. Charles Rangel broke House rules. What's a Speaker to do? 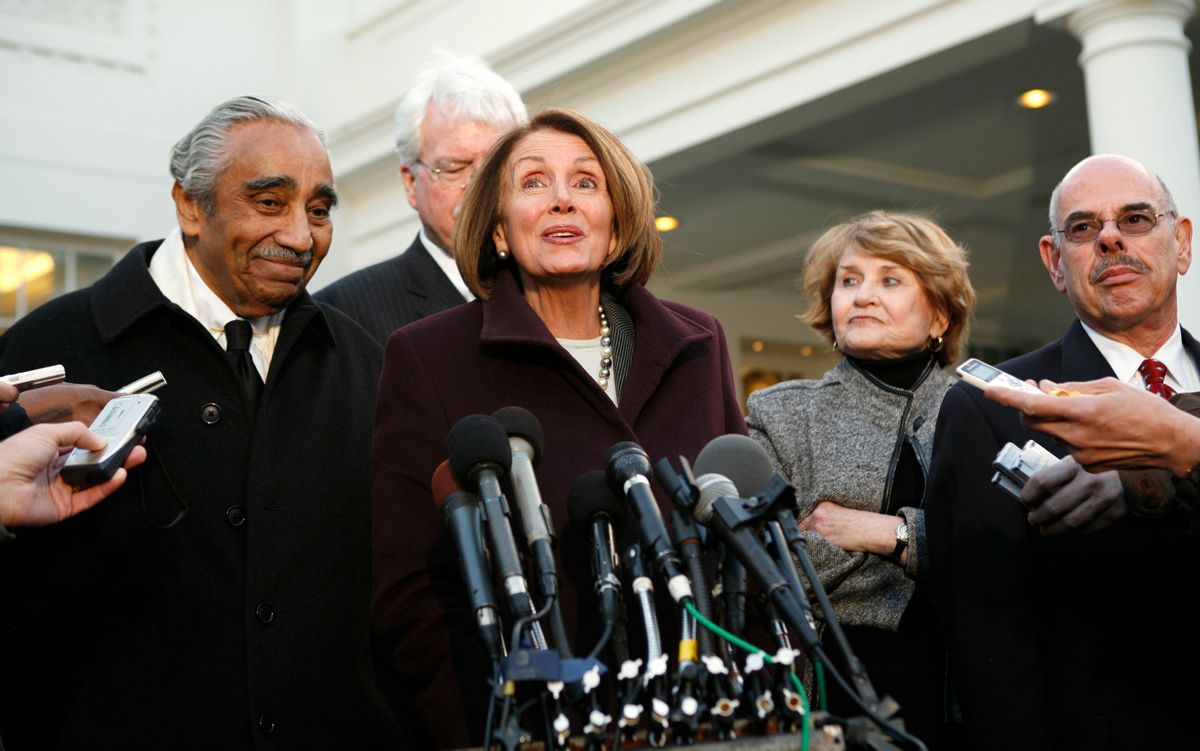 Suddenly, it looks like Nancy Pelosi will have to confront her Charlie Rangel problem after all.

For more than a year, the House Speaker has managed to buy herself time every time Republicans or the media (or both) have made noise about Rangel and his ethical issues. The House ethics committee is looking at it, she would say, and I won’t do or say anything until they report back.

But now there’s word that the slow-moving panel has found Rangel, the 79-year-old chairman of the tax-writing Ways and Means Committee, guilty of breaking House rules by taking a corporate-funded Caribbean junket.

Already the calls for his ouster from Ways and Means have begun. Republicans have been shrieking for Rangel’s head for months, rubbing Nancy Pelosi’s “most ethical Congress in history” pledge in her face, and now even some Democrats – mindful of the election-year albatross that Rangel represents – are joining the chorus. “Time to strip Rangel of his W&M chairmanship,” the Daily Kos’ Markos Moulitsas tweeted tonight.

Let’s be clear: Pelosi would like to see Rangel go. Railing against him – a tax cheat running the tax-writing committee! – is a political goldmine for the GOP (which has already tried to embarrass House Democrats by forcing floor votes on Rangel’s gavel status). But prying him from Ways and Means is trickier than you’d think.

Her first option is to convince Rangel to give up his post voluntarily. Good luck with that. Rangel is a House lifer. He won his seat in 1970, part of a generation of African-American congressmen who decided they’d have better luck climbing the internal House ladder than trying to run for higher office in their home states. The seniority system ensured his slow, steady rise and when – after 12 long years of GOP rule – Democrats won back the House in 2006, Rangel, at 76 years old, found himself in one of Washington’s most powerful perches.

For Rangel, the Ways and Means chairmanship is both a reward and a ticket to relevance. The alternative – backbencher status – is flatly unacceptable. Don’t forget: he was so fed up with being out of power that he announced in the summer of 2006 that he’d retire after that year’s election if Democrats didn’t take back the House.

Not surprisingly, Rangel already began digging in his heels on Thursday night, insisting that the forthcoming report – to be released on Friday – actually exonerates him. Expect him to stick to this script for as long as he can.

So it’s likely that Pelosi will have to play hardball if she wants to oust Rangel. Which is where things get tricky, because within the Democratic caucus, big-picture political calculations – what will help us win in November? – are often secondary to factional politics.

In Rangel’s case, the particular issue has to do with the Congressional Black Caucus, of which he is a founding member. For understandable reasons, the CBC tends to be sensitive when it comes to gavels and committee assignments. Historically, many of its members – like Rangel – have relied on the seniority system for their political status and power. The idea of removing a CBC member from a choice assignment or bypassing a CBC member for a plum opening is not to be considered lightly.

Pelosi discovered this four years ago, after the feds raided then-rep. William Jefferson’s home and discovered in his freezer $90,000 in – literally – cold, hard cash. Jefferson was a member of Ways and Means and, as with Rangel now, the Republican taunts began almost instantly.

The 2006 election was months away and Republican corruption was a key plank in the Democratic platform. Pelosi wanted to be rid of Jefferson – fast. He wouldn’t resign from Ways and Means, so she sought his expulsion. And when she did, all hell broke loose. CBC members rushed to his defense, noting that he hadn’t been convicted of anything (or even) indicted. To punish him preemptively, they argued, would violate due process – and raise the specter of a double-standard, since white Democrats under similar clouds had not been forced to give up their committee seats.

After weeks of maneuvering, Pelosi finally arranged for a vote of the full Democratic caucus on Jefferson’s fate. The meeting was heated, with CBC members – and some unlikely allies—revolting. Despite the strong case for booting Jefferson, nearly 60 House Democrats voted not to remove him – not quite enough to save him, but plenty to teach Pelosi a lesson.

It’s worth noting, too, that Pelosi received some quiet help when she moved on Jefferson from Rangel and several of his CBC allies. Jefferson was something of an outcast in the group. Out of principle, most CBC members stood with him. But some of the group’s most important leaders – like Rangel – quietly assisted Pelosi (hoping, no doubt, to gain a chit from a future Speaker).

But when it comes to Rangel now, Pelosi won’t find similar help at the top of the CBC. The Harlem Democrat is a CBC lion, a founding member who inspires deep reverence from its members. If Rangel asks them to fight for him, they will.

This is why Pelosi has been dreading this day for so long. If she pushes, she could probably muster the votes to bounce Rangel, but the price would be steep: an ugly fight that would attract national press attention, hand Republicans cannon fodder, and divide her own coalition. Or she could look the other way, which would give the GOP even more ammunition and anger swing-district Democrats, who don’t want to have to explain to their constituents why they’re “protecting” Charlie Rangel.

Maybe Rangel will have a change of heart and fall on his sword. But to hear him on Thursday night, that hardly seems likely. So now it’s Pelosi’s move.