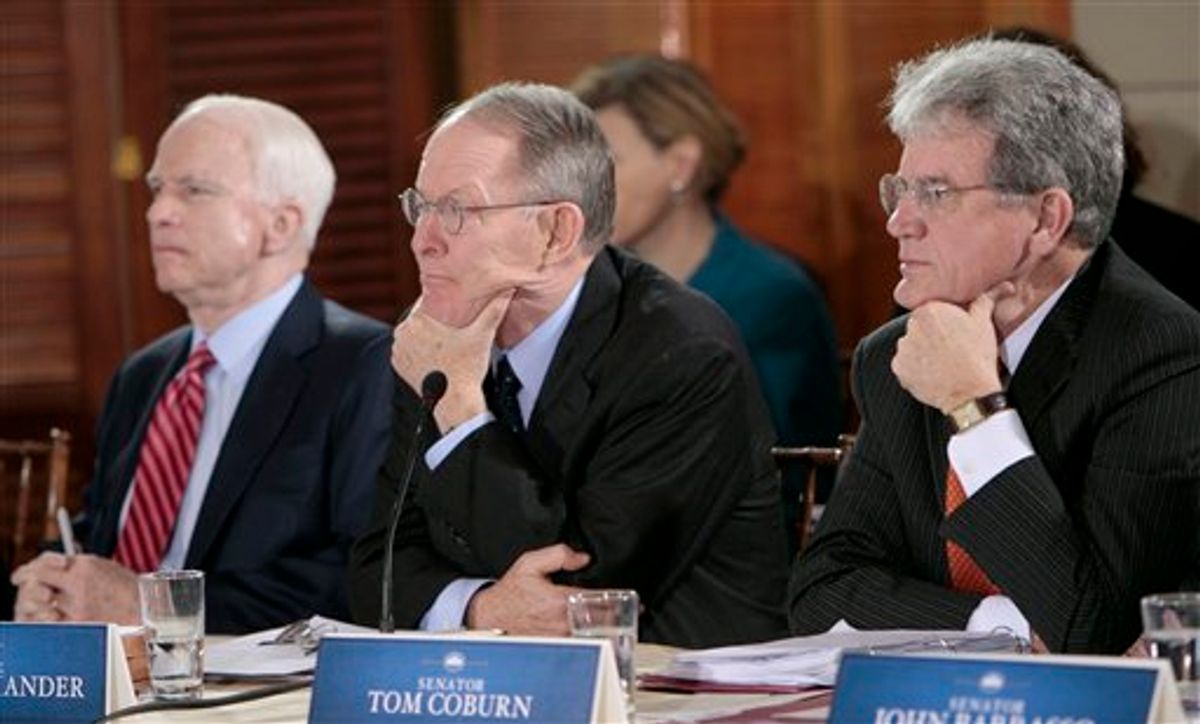 As President Obama sat listening to the Republicans during his all-day summit, he hardly seemed surprised by the absence of constructive ideas or bipartisan compromise. Had he harbored any such forlorn hopes when the healthcare meeting commenced on Thursday morning, his GOP guests at Blair House swiftly restored a sense of political reality: They were determined to repeat the familiar phrases and arguments they have rehearsed for months -- just as they promised to do when they grudgingly accepted Obama's invitation.

Yet that doesn’t mean the seven hours or so of (mostly) polite jabbering were wasted. Although much too long to be called a teachable moment, today’s session offered a real chance to learn what leading Republican politicians really think about healthcare, insurance companies and working people who don’t enjoy the same kind of coverage that we provide for them. And it also emphasized what Americans already know and appreciate about Obama -- namely, that he has allowed the opposition many chances to seek bipartisan compromise, only to be spurned in the most cynical way every time.

From the beginning of the summit, the Republicans also provided insight into the propaganda points that have worked so well for them over the past year -- but seem transparently fraudulent when someone like Obama is present to correct them. So when Sen. Lamar Alexander started to claim that reform will cause premiums to rise, the president corrected him, using the same Congressional Budget Office study that the Tennessee senator had cited.

The point at issue, which involved how much premiums might rise for various classes of consumers under the Senate and House bills, might sound somewhat technical. But Obama was right: the CBO study indicated that premiums would go down as much as 20 percent for families receiving the same coverage they buy now -- and would go up for those who sought better coverage.

Which would seem obvious, on reflection, and not something that Alexander, who isn’t stupid, would be likely to misunderstand. He almost certainly doesn’t, in fact, but he wants the public to misunderstand, so they will fear that their premiums will rise if "Obamacare" is enacted. As his colleagues gloatingly pointed out more than once, polls show that most Americans now believe that particular lie.

The Republican leaders were unafraid to sound ignorant, as Minority Leader John Boehner demonstrated when he claimed, toward the end of the day, that medical malpractice insurance for doctors is "the biggest cost driver" in American healthcare. He deserved to be corrected less gently than he was by the president and Sen. Dick Durbin, D-Ill., but perhaps they make allowances for Boehner, who might be dim enough to believe whatever he parrots from the script.

John McCain, whose petulant sneering at the president almost became the headline of the summit, quickly chimed in on malpractice to say that laws limiting claims in Texas and California have "worked." But, again, he and Boehner both had to listen as their propaganda gambit was shot down. As Durbin noted, malpractice claims and verdicts across the country have declined markedly over the past decade, and not just in California and Texas. Malpractice insurance accounts for a tiny fraction of a percent of the cost of healthcare in America. And, as Rep. Henry Waxman explained patiently to McCain, those wonderful limitations on malpractice have been in effect in California for decades – without affecting the cost of insurance, which Anthem has just proposed to increase for its customers in the Golden State by nearly 40 percent.

Malpractice insurance, like "death panels" and deficit spending, is merely another pseudo-problem, thrown up to distract the public from the central issues of health care reform -- how to provide coverage to the uninsured and how to curb the excesses of the insurance industry.

The Republican attitude about these questions was summed up crisply by Sen. John Barrasso, a Wyoming orthopedist who blurted out a rather jaundiced view of his patients, and by extension the American people. It turns out that Barrasso thinks full coverage is bad, because when people have the same kind of coverage as senators do, they don’t worry enough about the costs. If they only have catastrophic coverage, according to him, then they will become better consumers.

What kind of doctor wants his patients to worry about whether they can afford the tests and treatments they might need? What kind of doctor would abdicate responsibility for those crucial health decisions to the market? It was hard not to feel sorry for Barrasso’s patients -- and easy to think that they, if not the rest of us, are better off with him in Washington rather than Wyoming.

The other Republican senator who practices medicine, Oklahoma’s Tom Coburn, was perhaps the only one of his colleagues who made useful points about prevention, best practices and other basic reforms that might help to control future costs. He is sufficiently eccentric to be sincere. Making actual changes in healthcare that would lead to such improvements, however, is complicated, and requires the lengthy, complex legislation that Coburn (and his Republican colleagues) now deride. Maybe that is why he wanted to come back for further discussion -- a suggestion that his friend Obama gently tabled.

In his summation, Obama was as masterful as usual in such circumstances. He outlined the potential areas of agreement, delineated the sharp points of dispute, and explained why Democrats should not be intimidated by polls. He said again that his purpose is to achieve what every other advanced nation does for its people – to provide health security for all at a reasonable cost to the nation. He offered a final chance to seek consensus between the parties, to be followed by "hard choices."

We’re not starting over, he told the country, and we’re going to pass a bill. Having laid down that final marker, he and the Democrats cannot flinch again.