Was joint custody a mistake?

Eight years after my divorce, I am a single parent with half a child 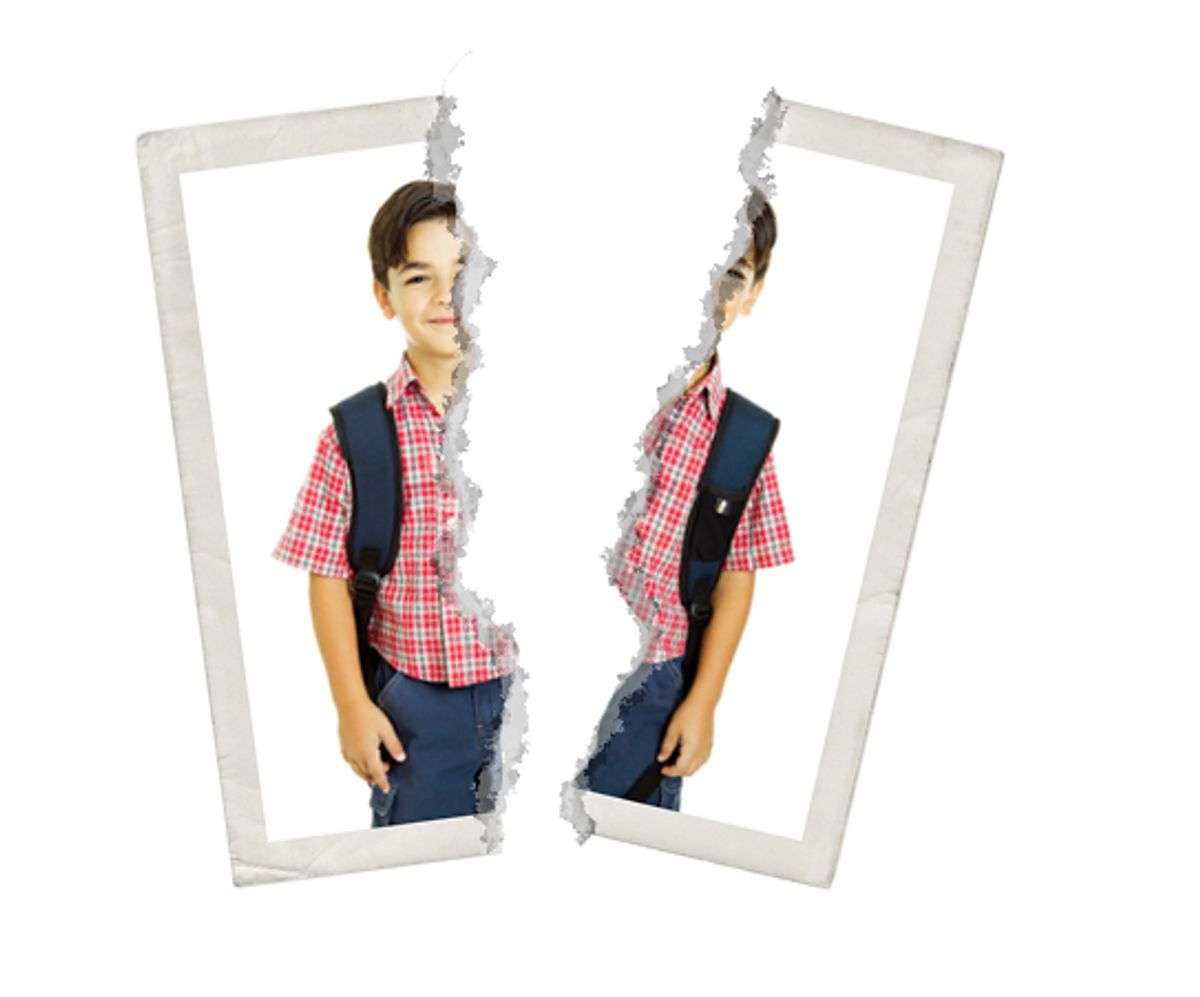 When my son was 7, he asked me how to spell "onomatopoeia." I was getting dressed in my room; he in his. I closed my eyes to see the word in my head, and yelled each letter as best I could across the hallway. Later, I wondered whether I had gotten the o-e-i-a sequence right. I looked it up in the dictionary sitting on my desk. On my way to onomatopoeia I found "onus." Here is the entry:

This dictionary, edited by famous and culturally in-the-know writers, has chosen single parenting to best capture the meaning of onus. To understand what it means to have a cross to bear, a millstone around one's neck, an albatross, liability, mantle, imagine being a single parent.

I am a single parent. Apparently, I have an onus. (Think about the word long enough, and it might just well become onomatopoetic.)

If "onus" sums up single motherhood, "amicable" sums up how one should divorce. It is recited so ubiquitously it takes on a talismanic quality. The word resonates in my head to the point of nonsense, like any word you say over and over again until it becomes strange, a word you don't know, an incantation in a foreign language said by penitents of some other religion. Crowds chant Allah on their knees in mosques; in my head I hear friends, family, helping professionals whispering amicable, amicable, amicable.

For reasons I cannot yet fully explain (hence I seek etymology and incantations, look things up), I accepted the terms my husband laid out when he left me: Fifty-fifty.

Psychologists write books about children dealing with divorce, and friends are quick with "children need both parents" quips. The truth is, no one will know, at least for some time, whether joint custody was the right choice for my son, or for me. What I do know is that it means I am an albatross-wearing social ill half the time. Or, as my therapist once put it, I have "half a child."

I used to wander the parenting-memoir section of bookstores on my nights "off" from mothering. As I scanned the titles I felt like the one kid on the jungle gym not invited to the play date. The allure of reading these books is to find something that resonates with one's own experience, but they do an end run around single moms. Authors profile moms from the North and from the South, moms who are in the 10 percent tax bracket and moms in the 35th percent, moms who are evangelical and moms who are pagan. But they rarely choose a mom like me. My experience appears in lines like this one, from Judith Warner's "Perfect Madness: Motherhood in an Age of Anxiety": "[N]ot having had a working (hence, absent) mother is not the thing most mothers today cite as the cause of their mom-related psychological woes. It's having an unhappy mother. A divorced mother, perhaps, who was crippled with worry over money."

There seems a huge cultural premium put on encouraging these myths. There is a mommy cabal out there. Caitlin Flanagan writes: "Every morning a child should wake up to see her mother's face." Does this mean, since my son awakes every other morning to his father's face, I am a bad mother? It takes an act of will, or repression, to publish so many books about contemporary motherhood that contain so little about mothers with joint custody of their children.

TV tells me a different story than does mommy-lit. On TV, wives are to become indignant when men have affairs and say things like, "You do that again and I'm going to take the kids and leave you." We are meant to root for these mothers. You go, girl. If he screws around, then you get the kids.

But what about the "onus" part? We mothers are supposed to fight to have our children with us when their fathers go bad, but then we are to be pitied, schlepping around those millstones and bearing those crosses while also slinging baby on our backs, shoulders hurting from the too-low stroller handles.

When my husband had his affair I did not ever once say, "I'm going to take Simon." I had my reasons, good ones, I think, but ones that only can sound self-righteous when explained: I thought the best thing for my son would be to be with his father too. I sacrificed time with him so he could have time with Dad.

I feel relentlessly guilty about this decision, perhaps because I read too much mommy-lit and watch too much TV on the nights Simon is with his dad. Eight years later, a life with my ex now unimaginable and the marriage no longer mourned, I still have not resolved the question of joint custody. It gets right into the crux of motherhood; of what we should do, who we should be. I keep wondering why I wasn't like those women on television. Sometimes I hate them and scream at them from the couch; sometimes I sink further into the pillows to escape the threats, the insinuations: I should have packed that kid into the car and driven away. Shouldn't I?

When Simon was 3, he used to call the time after the lights were out and before he fell asleep "the talking dark"; it was one of those pitch-perfect childhood phrases coined to describe an experience not found in grown-up parlance. In the talking dark, Simon talked himself to sleep. In the talking dark, bad guys were defeated, weather was commented upon, stuffed ducks waddled into ponds. He also got two of everything that year: two bedrooms, two sets of toys, two different jammie rotations. Dad's house and Mom's house were very separate places in his consciousness, a firewall built between them so thick that once, when he was with his dad and ran into me on the street, he introduced us to each other. "Mommy, this is Daddy. Daddy, Mommy." But he had one talking dark. One consciousness to inhabit and one narrative machine with which to invent stories out of the tracks of his days.

Simon will be a very tall, broad man someday. Today, 5 feet tall and chasing 100 pounds, he asks me to lift him up. My back hurts afterward, but it's good exercise. Simon giggles as I toss him around. He's not so heavy.

Anne Trubek teaches at Oberlin College and writes a literary column for GOOD magazine. Her book, "A Skeptic's Guide to Writers' Houses," will be published in fall 2010.