We visit a unique Brooklyn boutique for hard-working ladies who "wear boots, not suits" 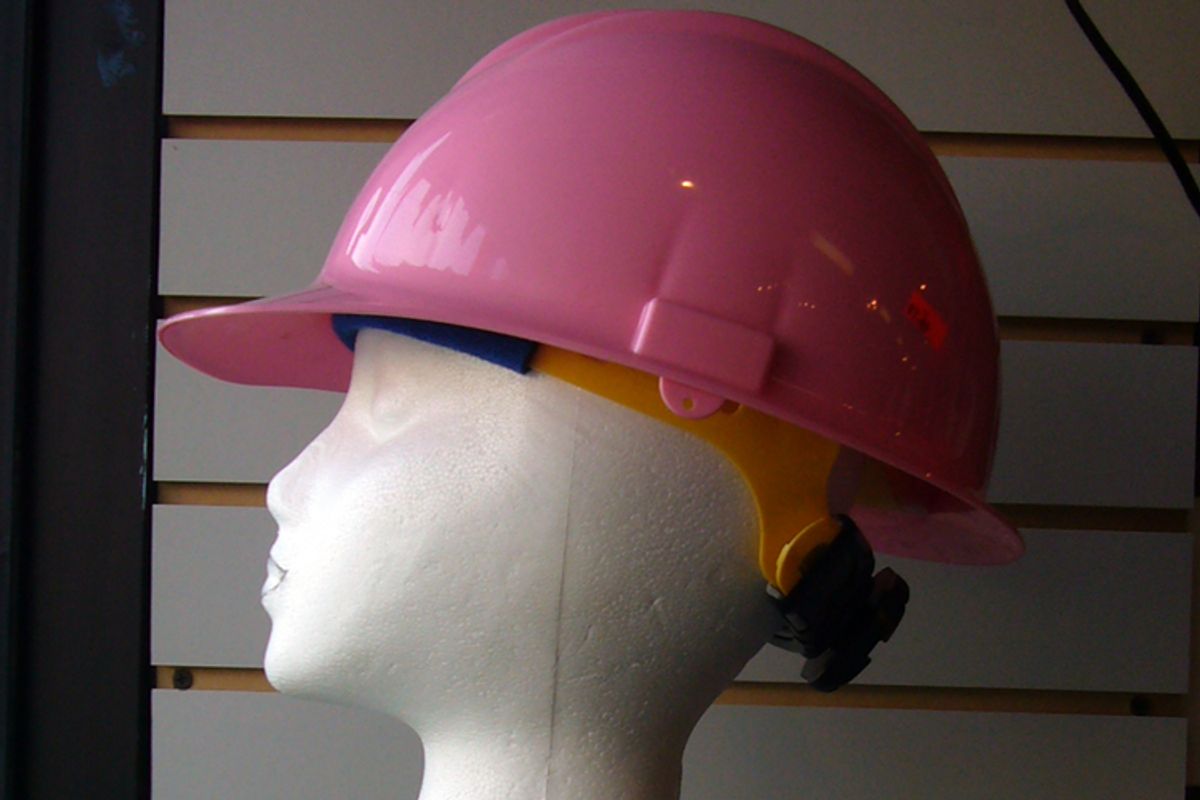 What do women really want? If you ask Deidre Douglas, owner of the Brooklyn workwear store Woman Up!, the answer is simple: Boots that fit. Douglas, a veteran of construction sites, runs a one-stop shop for New York's tradeswomen, MTA workers, firefighters -- any lady who, as Douglas's slogan goes, "wears boots, not suits" to the job. The Prospect Heights shop carries everything you need for a day up on the girders or working on the rail tracks, from support belts to utility knives. The walls are adorned with pictures of Rosie the Riveter and signs for trade unions, as well as racks of gloves in every color, texture and thickness. Broadsheet visited Woman Up! to talk about women in the trades, finding a body armor shirt that fits and what's up with those pink hardhats.

How did you get the idea for Woman Up?

Well, I work in cement and concrete. My trade has a small number of women. There are only four women in my union, Local 20, the last time I asked. I started doing it and had a really hard finding the stuff I wanted to wear. You'll find women's working clothing, but you'd have to go to a man's store and then see if they have a woman's section. It's frustrating. I wanted to do the reverse: have a woman's store with a man's section.

I mean, you have to be onsite at 6:30 in the morning, and at 3:30 I make a beeline to the school in my dirty clothes, hammer hanging out to pick up the kids. And then there's homework and dinner, and that's something people don't consider when it comes to women in the trades. I try to have the store to make that a little bit easier. People don't think about it. If the [electricity company] lady is at your house at 8 a.m., then what time do you think she had to get to work by? What time do most daycares open? If you can run to one place to get boots and gloves, and maybe a bra too, it'll help out a whole lot.

Why are there so few women in the trades?

It depends on what trade you're talking about. Electricians have a large population of women compared to the other trades. But I would say one of the reasons there aren't that many women in trades is because the unions are still good ol' boys clubs. It's tough. The process is really closed.

How much of what you stock is about safety, and how much is about style?

For me, the style element isn't that important. But if, say, I couldn't find a body armor shirt that fit me, I would layer up with four or five t-shirts and then a jacket. So it would be more fashionable if you don't have to wear loads and loads of clothing to make up for not finding something in your size. You look good in clothing that fits you. I carry pink, because that's just what some ladies like. Pink's not really my thing, but I try to accommodate everyone. We also airbush [helmets]. If you're Guyanese or Mexican, we can airbrush the flag on your helmet.

What's next for Woman Up?

I'm trying to go global, girl! We're not the only ones that build. China builds. Sweden builds. Puerto Rico builds. We all build. I figure if I get big enough with the store, maybe we'll be able to implement more change, getting women into the union and getting them onto these job sites…The work is physically demanding. And the schedule is tough: If your child is sick you can't miss a day. But you get there early, and you go home early. Once you finish at the end of the day, that's the end. And I make more money now than when I was working a management job. Why shouldn't more women work in the trades? I think it's one of the best jobs in the world.