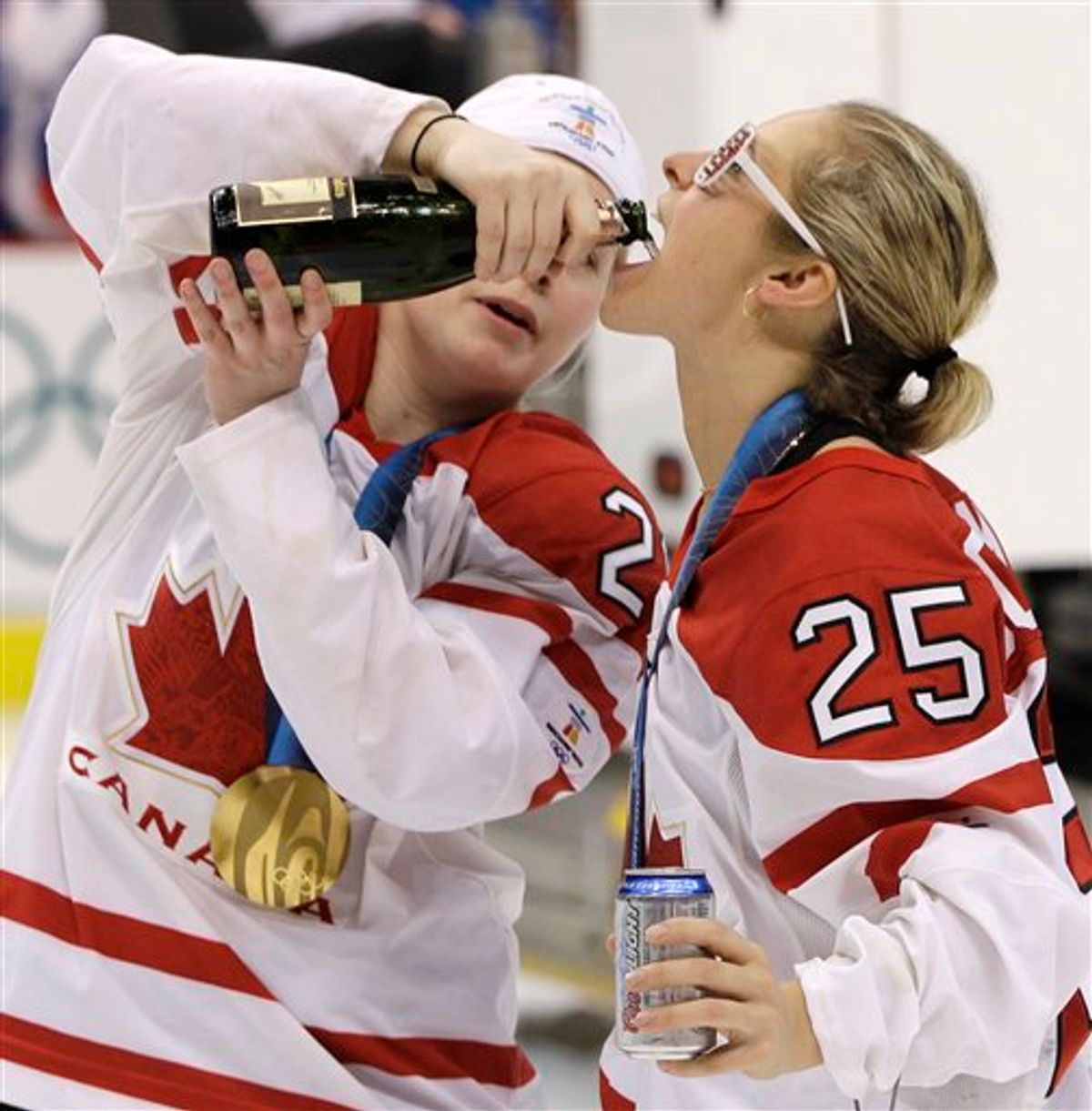 Canada's women's hockey team has scored quite the controversy by daring to celebrate their win against the U.S. on Thursday by sipping beer, guzzling champagne and smoking cigars on the ice. After the fans filtered out of the stadium, the ladies returned to the rink still in uniform with gold medals draped around their necks. They laid on the ice, poured champagne in each other's mouths and soaked up the Olympic glory. Their revelry hardly would have garnered any attention, except for one minor detail: there was an Associated Press photographer on hand to capture it all on film.

Now, the International Olympic Committee has reportedly written a letter to the Canadian National Olympic Committee "to find out a few more details," and the team has issued a public apology. What's the big deal, you might ask? For one, 18-year-old team member Marie-Philip Poulin was snapped holding a beer, and she's just under the legal drinking age in British Columbia. OK, so that's inappropriate, I guess -- only, in her home of Quebec, the drinking age is 18. Are people really that scandalized that someone just weeks away from her 19th birthday was caught imbibing in Vancouver after winning an Olympic gold medal?

I suspect not. Judging by the online chatter over the "incident," the age issue is but one more complaint shoveled onto the pile. Primarily at issue is that some perceive it as a display of poor sportsmanship, which I find kind of hilarious for two reasons: 1.) Ice hockey is one of the most impolite professional sports around (within five minutes of the first men's hockey game I attended, two players had already resorted to fisticuffs on the ice), and 2.) Have these people never witnessed the hooting, hollering, fist-pumping, champagne-popping, and exclamations of "I'm goin' to Disneyland!" at, like, any major sporting event?

I hate to be predictable, but I gotta say it: I suspect there's also a definite undercurrent of sexism here. For example, one blogger wrote:

My question is: Why 'ladies' play men's sports and look so awkward (unlady like) in the process? Being a woman is all about being a woman (grace, softness...). Figure skating is by all standards a women's sport, as we witnessed yesterday in Kim Yu-Na's performance. Simply brilliant.

So ladies, make an attempt to look like females, stay away from men's sports, don't try to be like men, you know, that's what the men are for.

Aw, I think he's scared of the big bad lady athletes. Poor dude -- we just aren't used to seeing women engaged in such stereotypically manly celebration. Not only are they drinking beer, they're also chugging champagne and smoking cigars. Looking through the photographs, you can almost hear their self-satisfied guttural belches -- and, you know what? It makes me swoon in full-blown girl-crush mode. I mean, my cheeks actually ache because every time I catch a glimpse of those snapshots, I grin uncontrollably. Now these are some women I'd like to grab a beer with.

Why don't all the haters take a note from these Canadian ladies: Grab a Molson's and chill out, eh?