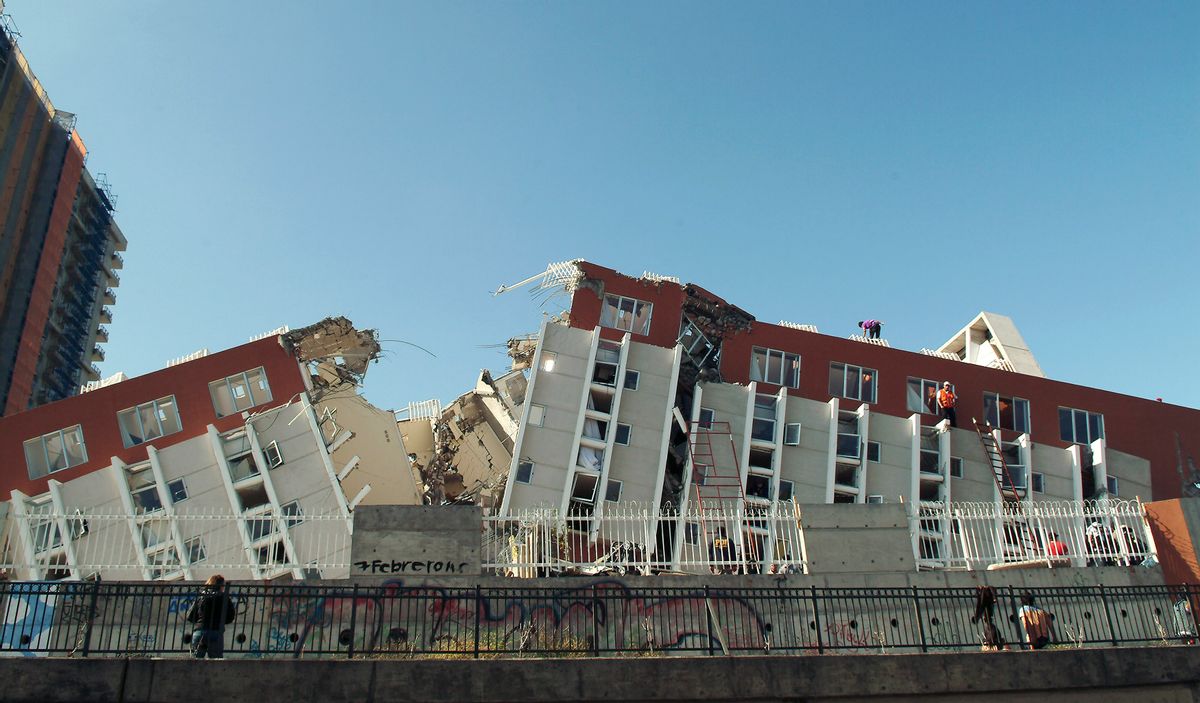 Rescue workers search for victims and survivors after an apartment complex collapsed during an earthquake in Concepcion some 100 km (62 miles) south of the epicenter, February 27, 2010. A huge magnitude-8.8 earthquake struck Chile early on Saturday, knocking down homes and hospitals, and triggering a tsunami that rolled menacingly across the Pacific REUTERS/Jose Luis Saavedra (CHILE - Tags: DISASTER ENVIRONMENT IMAGES OF THE DAY) (Reuters)
--

The earthquake in Chile was far stronger than the one that struck Haiti last month -- yet the death toll in this Caribbean nation is magnitudes higher.

The reasons are simple.

Chile is wealthier and infinitely better prepared, with strict building codes, robust emergency response and a long history of handling seismic catastrophes. No living Haitian had experienced a quake at home when the Jan. 12 disaster crumbled their poorly constructed buildings.

And Chile was relatively lucky this time.

Saturday's quake was centered offshore an estimated 21 miles (34 kilometers) underground in a relatively unpopulated area while Haiti's tectonic mayhem struck closer to the surface -- about 8 miles (13 kilometers) -- and right on the edge of Port-au-Prince.

The U.S. Geological Survey says eight Haitian cities and towns -- including this capital of 3 million -- suffered "violent" to "extreme" shaking in last month's 7-magnitude quake, which Haiti's government estimates killed some 220,000 people and left about 1.2 homeless. Chile's death toll was in the hundreds.

By contrast, no Chilean urban area suffered more than "severe" shaking -- the third most serious level -- Saturday in it's 8.8-magnitude disaster, by USGS measure. The quake was centered 200 miles (325 kms) away from the capital and largest city, Santiago.

In terms of energy released at the epicenter, said Calais, the Chilean quake was 900 times stronger. But energy dissipates rather quickly as distances grow from epicenters -- and the ground beneath Port-au-Prince is less stable by comparison and "shakes like jelly," says University of Miami geologist Tim Dixon.

Survivors of Haiti's quake described abject panic -- much of it well-founded as buildings imploded around them. Many Haitians grabbed cement pillars only to watch them crumble in their hands. Haitians were not schooled in how to react -- by sheltering under tables and door frames, and away from glass windows.

Chileans, on the other hand, have homes and offices built to ride out quakes, their steel skeletons designed to sway with seismic waves rather than resist them.

"When you look at the architecture in Chile you see buildings that have damage, but not the complete pancaking that you've got in Haiti," said Cameron Sinclair, executive director of Architecture for Humanity, a 10-year-old nonprofit that has helped people in 36 countries rebuild after disasters.

Sinclair said he has architect colleagues in Chile who have built thousands of low-income housing structures to be earthquake resistance.

In Haiti, by contrast, there is no building code.

Patrick Midy, a leading Haitian architect, said he knew of only three earthquake-resistant buildings in the Western Hemisphere's poorest country.

Sinclair's San Francisco-based organization received 400 requests for help the day after the Haiti quake but he said it had yet to receive a single request for help for Chile.

"On a per-capita basis, Chile has more world-renowned seismologists and earthquake engineers than anywhere else," said Brian E. Tucker, president of GeoHazards International, a nonprofit organization based in Palo Alto, California.

Their advice is heeded by the government in Latin America's wealthiest nation, getting built not just into architects' blueprints and building codes but also into government contingency planning.

"The fact that the president (Michelle Bachelet) was out giving minute-to-minute reports a few hours after the quake in the middle of the night gives you an indication of their disaster response," said Sinclair.

Most Haitians didn't know whether their president, Rene Preval, was alive or dead for at least a day after the quake. The National Palace and his residence -- like most government buildings -- had collapsed.

Haiti's TV, cell phone networks and radio stations were knocked off the air by the seismic jolt.

Col. Hugo Rodriguez, commander of the Chilean aviation unit attached to the U.N. peacekeeping force in Haiti, waited anxiously Saturday with his troops for word from loved ones at home.

He said he knew his family was OK and expressed confidence that Chile would ride out the disaster.

Calais, the geologist, noted that frequent seismic activity is as common to Chile as it is to the rest of the Andean ridge. Chile experienced the strongest earthquake on record in 1960, and Saturday's quake was the nation's third of over magnitude-8.7.

"It's quite likely that every person there has felt a major earthquake in their lifetime," he said, "whereas the last one to hit Port-au-Prince was 250 years ago."

On Port-au-Prince's streets Saturday, many people had not heard of Chile's quake. More than half a million are homeless, most still lack electricity and are preoccupied about trying to get enough to eat.

Fanfan Bozot, a 32-year-old reggae singer having lunch with a friend, could only shake his head at his government's reliance on international relief to distribute food and water.

"Chile has a responsible government," he said, waving his hand in disgust. "Our government is incompetent."