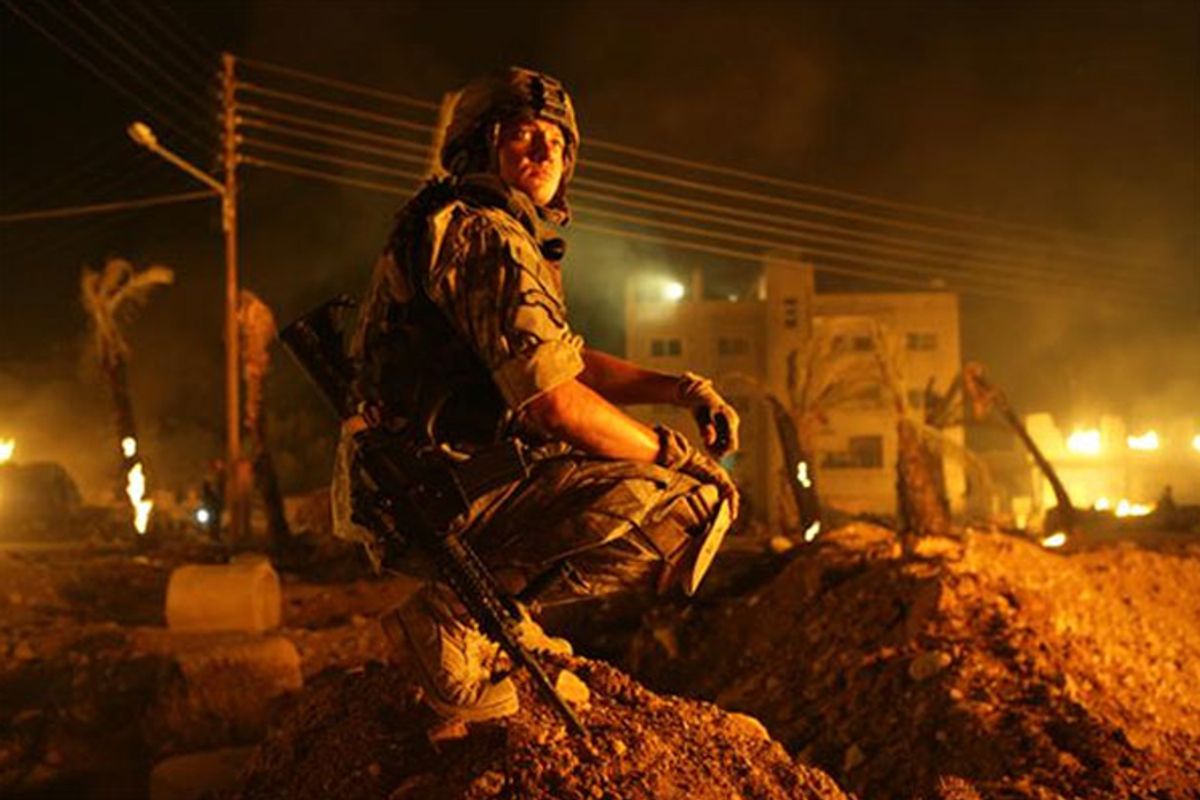 Jeremy Renner in "The Hurt Locker."
--

At times Jeremy Renner's performance in "The Hurt Locker" is all fingers, though it's never all thumbs. Sometimes it seems that director Kathryn Bigelow shows more of his hands than of his face: Renner's character, Staff Sgt. William James, is a bomb-squad team leader in Iraq circa 2004. He's just been installed as a replacement for the squad's previous leader (Guy Pearce), who's been killed in action. James is a cowboy, at first annoying and angering his team by the way he takes unnecessary risks when he's disarming bombs. But for all his physical swagger -- he's cock of the walk even when he's suited up in the restrictively padded sand-colored snowsuit worn by bomb specialists -- the essence of his job boils down to what he can do with his hands. We see his slightly stubby fingers tracing a length of colored wire from a safe "here" to a lethal "there," or pulling an explosive mechanism apart the way you might pick at the meat of a chicken wing.

Because there's so much riding on those fingers, I think it's hard to appreciate, at least until a second viewing, how economical Renner's performance is. Or, for that matter, how funny it is. Renner has the face -- the mischievous eyes, the rubbery smile -- of a cutup. In an early scene he disembarks from a truck, ready for his first assignment: Beneath his helmet his face is a little scrunched up, like Popeye's, with a cigarette instead of a pipe clenched in his mouth. The movie is structured with a big explosion at the beginning, followed by long stretches of buildup, and Renner's casual, no-big-deal demeanor is the counterbalance to all that tension. When a young Iraqi boy pesters him to buy one of the bootleg DVDs he's peddling, James does the appropriate amount of bargaining before shelling out the dough. He caps the transaction with a friendly gesture: "Wanna cigarette?" he offers, and before the kid can even respond, he's ready with the inevitable teasing punch line: "Get outta here, you shouldn't smoke!" It's playful roughhousing -- James is like a battle-scarred lion cuffing a cub. And in scenes like this one, James the jokester makes it seem as if the sun shines all day long when he's off-duty.

But we gradually come to see how much his job takes out of him, and how wholly it has come to define him. If he weren't so astonishingly good at what he does, James wouldn't know who he was, and Renner inhabits that Nowhere Man perfectly. We see an early glimpse of the way his self-confidence is shadowed with deep inner doubt when a higher-up corners him after he's dismantled his first bomb on this particular tour of duty. The colonel (played by David Morse) asks him how many bombs he's disarmed, and he demurs, as if he doesn't know the answer. The colonel presses him, and he responds -- with the kind of humility that can flower only out of complete arrogance -- "873, including today." He seems to flinch as the colonel praises him further and asks a straightforward yet exceedingly complicated question: "What's the best way to go about disarming one of these things?" James looks uncomfortable as he offers up what might be his stock answer or an off-the-cuff improvisation: "The way you don't die, sir." Either way, Renner shows that James is fully comfortable doing his job; it's talking about it, examining it, that freaks him out.

James may be single-minded about his job, but as Renner plays him, he's not closed off to what's around him. He shows unpitying protectiveness toward one of his men, Eldridge (Brian Geraghty), when he sees that the soldier is slowly unraveling. There's something tender about the way James leads the jittery Eldridge though a simple task (during a very tense moment) that he's unable to complete on his own. But James is never condescending: He allows Eldridge his dignity, and Renner channels that idea beautifully. He sees that his character has multiple responsibilities to his men. His job is not just to keep them alive, but to know when they can't be pushed any further.

Many people have spoken and written of "The Hurt Locker" as an examination of wartime machismo. ("Made by a woman, no less!" is usually the unspoken, insulting subtext) But I think "The Hurt Locker" is more about process, specifically the delicate nature of this kind of work: In some ways the process of disarming explosive devices is almost like Victorian needlework, requiring the same sure and steady hand (though a needlewoman generally doesn't need nerves of steel). Bigelow is brilliant at directing action sequences, but her strengths don't begin and end with the mere mechanics of filmmaking, and her actors don't fail her in probing the subtler angles of the story she's telling. In "The Hurt Locker," Renner's James is a trickster, a crackerjack pro, but he's also a lost soul, most fully himself when he's trying to discern which wire leads to where. For him, the way you don't die is the only way to live.