Tsunami warning issued for Hawaii and others, as islands brace for potential impact 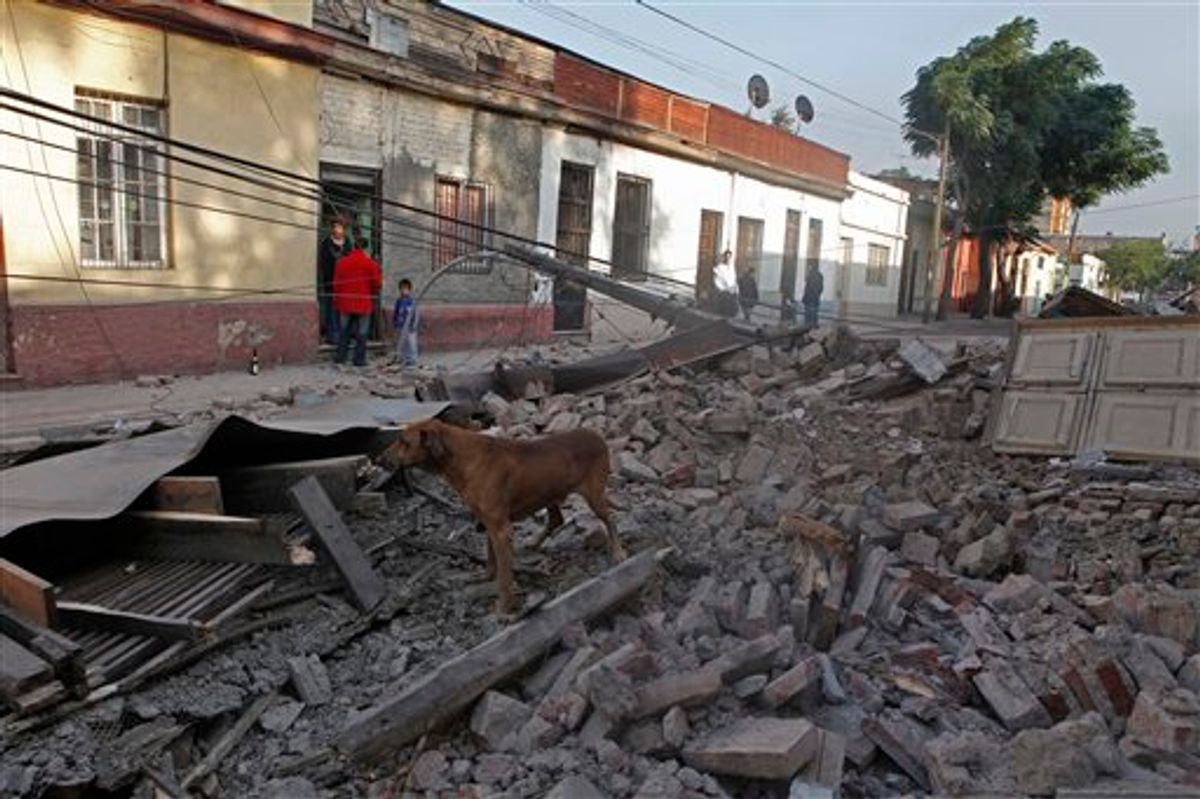 A dog stands in the debris of a collapsed wall on a street in central Santiago, early Saturday, Feb. 27, 2010. A powerful 8.8 magnitude earthquake hit 200 miles (325 kilometers) southwest of the capital and the epicenter was just 70 miles (115 kilometers) from Concepcion, Chile's second-largest city. ( AP Photo/Aliosha Marquez) (AP)
--

A tsunami threatened nations around the Pacific Rim on Saturday, with an 8.8-magnitude earthquake off Chile sending potentially deadly waves across the ocean as fast as a jetliner.

A tsunami warning -- the highest alert level -- was issued for Hawaii, where emergency officials planned to wake residents with sirens alerting them to the impending waves. Even before daybreak, lines formed at supermarkets with residents stocking up on water, canned food and batteries. Cars lined up 15 deep at several gas stations.

The first waves were expected at 11:19 a.m. Saturday (4:19 p.m. EST). Most Pacific Rim nations, awaiting further data, did not order evacuations but advised people in low-lying areas to be on the lookout.

Ecuadorean President Rafael Correa told the Ecuavisa channel that a tsunami has passed the Galapagos Islands, causing a swell but no damage.

Unlike other tsunamis in recent years, emergency officials along the Pacific have hours to prepare and possibly evacuate residents.

"We've got a lot of things going for us," said Charles McCreery, the director of the Pacific Tsunami Warning Center, which issues warnings to almost every country around the Pacific Rim and to most of the Pacific island states. "We have a reasonable lead time.

"We should be able to alert everyone in harm's way to move out of the evacuation zones," he said.

A warning was also in effect for Guam, American Samoa and dozens of other Pacific islands.

A lower-grade tsunami advisory was in effect for the coast of California and an Alaskan coastal area from Kodiak to Attu islands. Tsunami Center officials said they did not expect the advisory would be upgraded to a warning.

Waves were likely to hit Asian, Australian and New Zealand shores within 24 hours of Saturday's quake.

After the sirens are sounded in Hawaii, people in coastal areas, such as tourist-filled Waikiki, would then be instructed on a possible evacuation. The sirens will also be sounded again three hours prior to the estimated arrival time.

McCreery said he didn't know how big the waves will be, but expected them to be the largest to hit Hawaii since 1964.

"If you're in an evacuation zone, police or civil defense volunteers would instruct you to evacuate, or instructions will come out over the radio and TV," said Shelly Ichishita, spokeswoman for the state's civil defense.

If coastal areas are evacuated, visitors in Waikiki would be moved to higher floors in their hotels, rather than moved out of the tourist district, which could cause gridlock.

On Sept. 29, a tsunami spawned by a magnitude-8.3 earthquake killed 34 people in American Samoa, 183 in Samoa and nine in Tonga. Scientists later said that wave was 46 feet (14 meters) high.

A tsunami after a magnitude-9.5 quake that struck Chile in 1960, the largest earthquake ever recorded, killed about 140 people in Japan, 61 in Hawaii and 32 in the Philippines.

That tsunami was about 3.3 to 13 feet (one to four meters) in height, Japan's Meteorological Agency said.

Japanese public broadcaster NHK quoted earthquake experts as saying the tsunami would likely be tens of centimeters (inches) high and reach Japan in about 22 hours.

A tsunami of 28 centimeters (11 inches) was recorded after a magnitude-8.4 earthquake near Chile in 2001.

The Meteorological Agency said it was still investigating the likelihood of a tsunami in Japan and did not issue a formal coastal warning.

Australia, meanwhile, was put on a tsunami watch.

Any potential wave would not hit Australia until Sunday morning local time, it said.

The Philippine Institute of Vulcanology and Seismology issued a low-level alert saying people should await further notice of a possible tsunami. It did not recommend evacuations.

Associated Press writers Mark Niesse in Honolulu, Kristen Gelineau in Sydney and Eric Talmadge in Tokyo contributed to this report.