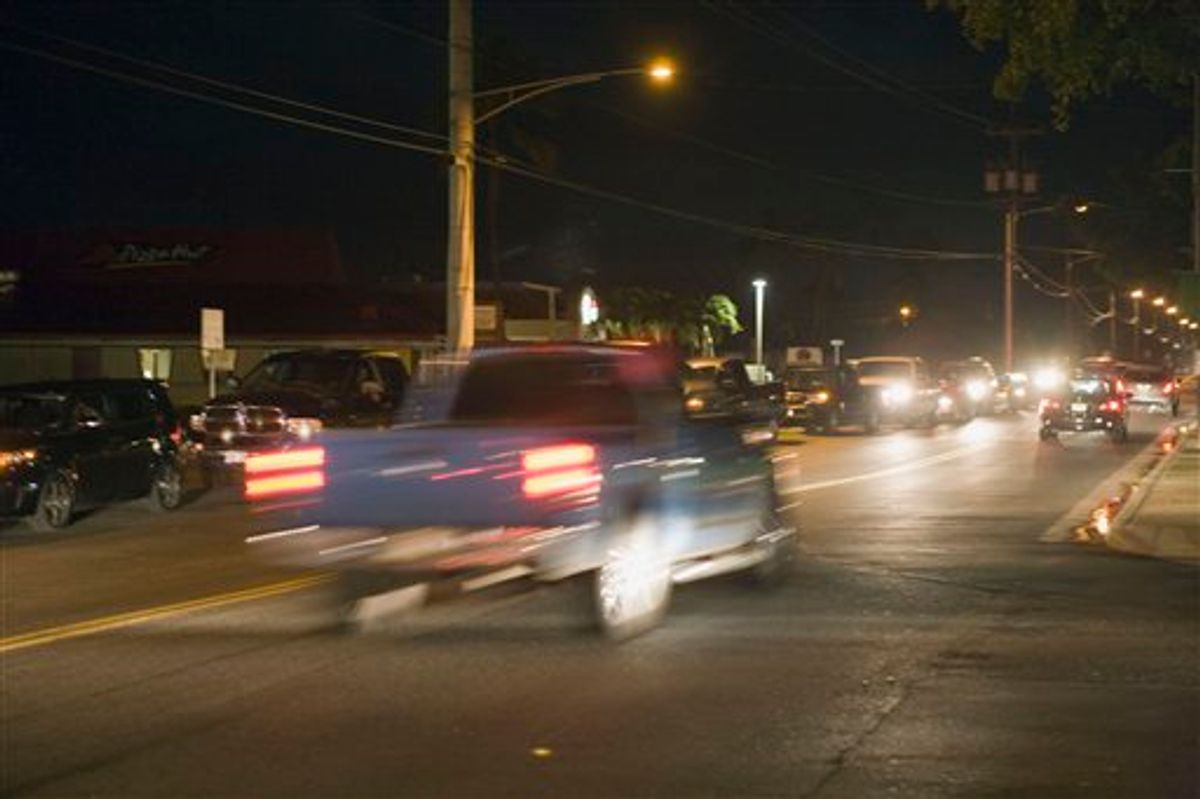 Motorists line up near a gasoline station early Saturday, Feb. 27, 2010, in Ewa Beach, Hawaii. Hawaii is under a tsunami warning after an earthquake of Chile. Many residents are loading up on gas and emergency supplies due to the warning. (AP Photo/Marco Garcia) (AP)
--

Waters have begun receding off the shores of Hawaii in what appears to be the first sign of a tsunami.

The tsunami began affecting Hilo Bay on the Big Island just before noon local time. Water began pulling away from shore, exposing reefs and sending dark streaks of muddy, sandy water offshore. That is usually an indication of the wave building strength before coming ashore.

The tsunami raced across the Pacific Ocean in terrifying force after the magnitude-8.8 quake hit Chile. Officials in Hawaii had ample time to get people out of the potential disaster area, and thousands were evacuated.

EWA BEACH, Hawaii (AP) -- A tsunami triggered by the Chilean earthquake raced across the Pacific Ocean on Saturday, threatening Hawaii as it rushed toward the U.S. West Coast and hundreds of islands from the bottom of the planet to the top.

Sirens blared in Hawaii to alert residents to the potential waves. As the waves expected arrival drew near, roads into tourist-heavy Waikiki were closed off. Police patrolled main roads, telling tourists to get off the streets

The first waves in Hawaii were expected to hit around midday Saturday (4 p.m. EST; 2100 GMT) and measure roughly 8 feet (2.5 meters) at Hilo. Most Pacific Rim nations did not immediately order evacuations, but advised people in low-lying areas to be on the lookout.

Unlike other tsunamis in recent years in which residents had little warning, emergency officials along the Pacific on Saturday had hours to prepare and decide on evacuating residents.

"We've got a lot of things going for us," said Charles McCreery, the director of the Pacific Tsunami Warning Center, which issues warnings to almost every country around the Pacific Rim and to most of the Pacific island states. "We have a reasonable lead time."

In Hawaii, where temperatures sat in the 80s, boats and people near the coast were being evacuated. The normally bustling beaches were empty. Hilo International Airport, located along the coast, was closed.

In Honolulu, residents lined up at supermarkets to stock up on food and batteries. Cars lined up 15 long at several gas stations.

The Navy was moving more than a half dozen vessels Saturday to try to avoid damage from the tsunami. A frigate, three destroyers and two smaller vessels were being sent out of Pearl Harbor and a cruiser out of Naval Base San Diego, the Navy said.

The ships will be safer out at sea than if they were tied to piers where they could be banged around by the waves, the Navy said.

In Tonga, where nine people died in a Sept. 29 tsunami, police and defense forces began evacuating tens of thousands of people from low-lying coastal areas as they warned residents that waves about three feet (one meter) high could wash ashore.

On the island of Robinson Crusoe, a huge wave from the tsunami covered half the village of San Juan Batista and three people were missing, said Ivan de la Maza, the superintendent of Chile's principal mainland port, Valparaiso.

A helicopter and a Navy frigate were enroute to the island to assist in the search, he said.

A tsunami warning -- the highest alert level -- was in effect for Hawaii, Guam, American Samoa, Samoa and dozens of other Pacific islands. An advisory -- the lowest level -- includes California, Oregon, Washington state, parts of Alaska, and coastal British Colombia.

British Columbia is hosting the Winter Olympic Games, but provincial officials said the venues are not under threat.

U.S. President Barack Obama says the government is preparing for a tsunami and he wants people in Hawaii, American Samoa and Guam to follow the instructions of local authorities.

Meanwhile, disaster management officials in Fiji said they have been warned to expect waves of as high as 7.5 feet (2.3 meters) to hit the northern and eastern islands of the archipelago and the nearby Tonga islands.

Waves were likely to hit Asian, Australian and New Zealand shores within 24 hours of Saturday's quake. A tsunami wave can travel at up to 600 mph, said Jenifer Rhoades, tsunami program manager at the National Weather Service in Washington, DC.

During the devastating December 2004 Indian ocean tsunami, there was little to no warning and much confusion about the impending waves. The tsunami eradicated entire coastal communities the morning after Christmas, killing 230,000 people.

In Honolulu, every TV was showing the news. Convenience stores and McDonald's and Burger King restaurants shut down. A few people were on the famed beach, including joggers on the sidewalk, but far fewer than normal. Most seemed to be watching the ocean.

The SackNSave grocery store was filled with people buying everything from instant noodles to beer. Shelves with water were mostly empty, save a few bottles.

"They are buying everything we got," clerk Memory Phillik said.

Hawaii Gov. Linda Lingle declared a state of emergency. She said leprosy patients from the Kalaupapa settlement on Molokai have been moved to higher ground. Helicopters are standing by if the patients need to be moved to a safer area.

New Zealand officials warned that "non-destructive" tsunami waves of less than three feet could hit the entire east coast of the country's two main islands and its Chatham Islands territory, some 300 miles east of New Zealand.