Zen and the art of serial-drama maintenance

"Lost," "24" welcome us into their comfortingly stupid nowhere lands 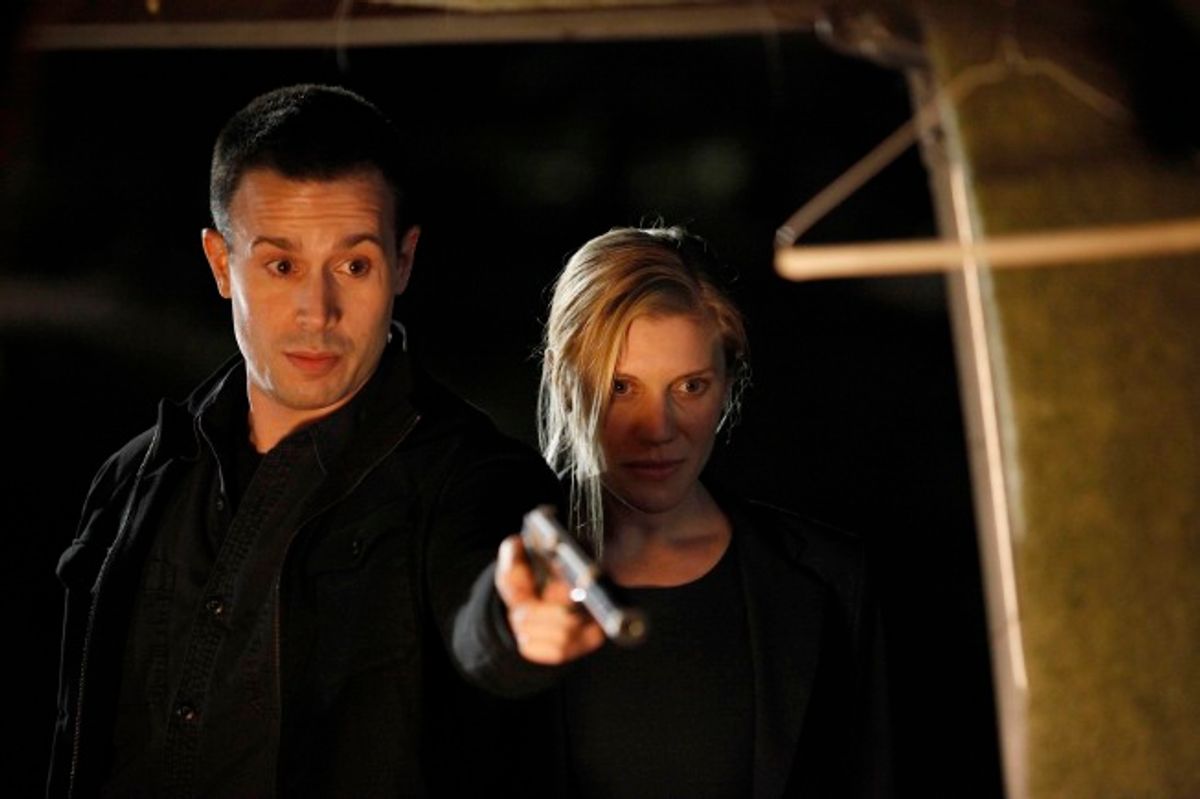 On the small screen, anything is possible: The hooker can have a heart of gold, the cloud can have a silver lining, the tunnel can have a light at the end of it. In real life, the tunnel is dark, the cloud dumps rain for days, and the hooker is indifferent and has Chlamydia.

No wonder we turn to our televisions for novelty, to see if the lovely downhill skier weeps tears of joy or disappointment, to find out if the patient's heart surgery saves his life or kills him, to discover if the castaways live happily ever after, or spend another week wandering through the jungle, searching for more clues.

So you mumble distractedly to your co-workers and your family all day long, then weep openly for the fictional heart patient on your TV screen at night.

What's interesting to me these days is that I still find myself addicted to shows that I have no emotional stake in whatsoever.

Take "24." Last Tuesday Jack was tortured yet again, the week before that Renee stabbed a man in the eyeball, and yet, there I am, calmly taking it all in, wondering how the writers are going to pull themselves out of this junk heap that they set out for themselves at the beginning of the season.

Why is it so relaxing and enjoyable -- so relaxing, in fact, that it often lulls me into a deep and dreamless sleep?

Sometimes I think it's the predictability of the unpredictable suspense drama that keeps me coming back for more. It's like my old roommate in San Francisco who came home from work every single night, smoked a big bong hit, and then watched a "Law & Order" rerun. For him, the bong and Sam Waterston were like a wife holding out a martini and a pair of slippers for him when he walked in the door.

Personally, I find the utter flavorlessness of Jack Bauer comforting. I appreciate his complete lack of flair. I like the bland resignation with which he endures yet another Russian thug hanging him by his wrists and applying jumper cables to his nards. While I can recognize, intellectually, that these scenes of torture are depraved and wrong and to repeat them, over and over, is to make torture itself mundane, I can't get very worked up about it, perhaps because "24" has already made torture mundane for me, or maybe because "24's" quaint little terrorist puppet show feels about as far removed from anything menacing or weighty as it possibly could be. Did "The A Team" celebrate vigilantism or criminal misdeeds? Weren't they technically domestic terrorists? I'm pretty sure that no one got the wrong impression about driving around in a van with your buddies, building homemade bombs, from Mr. T.

It also helps that the people getting tortured on "24" are usually either a) Jack Bauer, who is about as human-like as a bag of sod, or b) some clownish terrorist with a really bad accent who looks and acts just like every other clownish terrorist who has ever appeared on this twisted neocon flea circus.

Do these non-characters make us immune to the horrors of war? Or do they just provide a sort of modern, surreal Kabuki theater, some odd little stylized fable that teaches us that, no matter how big and scary the world might be, there are men like Jack Bauer somewhere out there, men who stage-whisper in hoarse voices and choke people with their bare hands in order to save our asses from certain destruction. We need not do a thing but sit back and spoon pudding into our empty heads.

No wonder "24" doesn't need to be good for me to watch it. It was never really "good" so much as difficult to turn away from in the first place. Sure, there was a time when it made my heart race uncontrollably. I miss those days. Now, most long, long interrogation sessions or intense emotional scenes put me right to sleep. Something about the extreme close-ups, those monotone voices they use, those featureless, empty rooms of CTU: It's institutional hypnosis.

The only scenes that keep me awake and curious this season are the ones that feature Katee Sackhoff, formerly of "Battlestar Galactica," who plays Dana Walsh. Dana is a CTU agent with a redneck ex-boyfriend who has pretty much thrashed her whole life simply by showing up at CTU and threatening to reveal her true name (Jen Scott) and troubled past (building homemade bombs in Shaggy's van?). Dana wisely responded by tossing her ex the keys to her apartment. Next she helps him steal some cash and – whoops! – beat up a cop. Then, once the ex escapes and he's celebrating with floozies and hard liquor and he's sure to be passed out or hung over for at least the next 12 hours, what does Dana do? She grabs a gun with a silencer and tracks the ex down, either to threaten him or blow his head off, it's not clear which. The whole subplot has been so preposterous and tangential to the main story (which isn't such great shakes itself this season) that I couldn't look away: It was too delightfully awful. This is the Kim-being-kidnapped-then-chased-by-mountain-lions plot of the season. This role is not doing Katee Sackhoff, whom I love, justice.

But maybe that's how you can remain addicted to shows long after they jumped the shark. There's fun in witnessing exactly how ridiculous things will get.

Of course, there's also the fear that you're going to miss something really important. Jack probably won't put the president in a chokehold, but if he does? I need to be there.

Jacob: Sometimes you can just hop in the back of someone's cab and tell them what they're supposed to do. Other times, you have to let 'em look out at the ocean for a while.

Hurley: Well, next time, how 'bout you tell me everything upfront? I'm not big on secret plans.

I feel you, Hurley. Maybe that's why "Lost" makes me so impatient. Nonetheless, I feel that it's my duty, as a guide to the TV world, that I continue to watch in spite of the obvious endless-maze, unraveling-yarn, black-hole, Möbius-strip, tedious-baby-shower nature of this beast.

After all, it is true that on "Lost," anything at all could happen, anything in the world! And what if I wasn't watching when it did? Someone else turns into a smoke monster or comes back to life or has a kid that we never even knew existed before, and then what? Hell, Jack could move to Des Moines to start a record shop, Kate could turn purple and start foaming at the mouth, Sawyer could grow wings and big claws and eat everyone's heads off, Jin could morph into Lady Gaga in patriotic Princess Leia drag with a firecracker strap-on, and I might miss the whole thing!

Because the writers of "Lost" are a lot like John Locke, who keeps brattily insisting that no one should be able to tell him what he can and can't do. And look, they're right, because the more ridiculous things get, the more people try to make sense of the ridiculousness. If reading this gigantic list of theories about "Lost" doesn't make your head hurt -- and no, not because it's an elaborate, thoughtful riddle, but because it's a big, jumbled mess of interconnected nothingness -- then you have a lot more patience for chaos that can only end badly (like life itself, dude!) than I do.

No, no, say the show's die-hard fans, it all adds up to pure brilliance, with numbers and mirrors and alternate realities! But ask any actual screenwriter or fiction writer or seasoned storyteller, and he or she will agree: There is no glorious final answer that can justify pulling a deus ex machina out of your ass every other episode.

Giving your lead character a kid that no one knew existed before is just a little bit like bringing dead characters back to life (Locke, Jacob, Sayid) or traveling through time or making the island disappear or creating an alternate universe to flash to because flashbacks and flash forwards had been exhausted. Now, of course, fans are going wild with speculation over the "new" timeline of this alternate world, when it started (1977?), and who Jack's alternate-universe wife might be. Juliet? Linda Carter? You know, I bet when Carly Simon whispered "David" backward in the new version of "You're So Vain," she wasn't referring to David Geffen at all, but was referring to Jack's musically talented son David, who's obviously going to travel back in time, become a record executive, and screw up Carly's career but good! And remember Carly's 1976 album was called "Another Passenger"? Oh my god, I'm blowing my own mind here!

Yes, yes, I know, David exists in the alternate timeline universe, and naturally there are no rules guiding that universe because what fun would that be? Maybe he only exists in the mirror or in Jacob's mirror-mind or maybe he's from the planet Zornular (where Michael and Walt were beamed before the tanker exploded) and he comes bearing a message about good and evil. You know, it's all about mirror worlds and redemption and the lighthouse is religious but the temple represents secular man's ability to enact miracles on earth without God, but smoke monster and Claire are forces of evil who are looking for "candidates," sort of like the GOP except with trekking through the jungle aimlessly where prattling on about healthcare reform aimlessly should go.

Look, there is actually a difference between an elaborate, multitiered maze created by a mathematical genius and an enormous, tangled mess of scrap metal dumped there by someone who read a few Wikipedia entries on chaos theory and quantum mechanics and thought they were seriously cool. When thousands of people are picking through the scraps while playing make-believe that they're in some wise and complex microcosm filled with deeper meaning?

Well ... it's strangely fascinating, isn't it? To watch, week after week, as the world scrambles and strains to sift through a junk heap? And to think, without the Internets, we'd never have such a front row seat to the ease with which the populace is drawn into a giant narrative roach motel.

Addictive, silly, and yet, oddly calming. It's not a guilty pleasure because there's no guilt and even less pleasure. Like staring into a washing machine as it spins, the repetitive nothingness of "24," "Lost" and so much of current popular media and culture offers a means of coaxing us out of our rage and disempowerment and into a state of soothing indifference.