And they all fell down

The downhill events -- the purest of Olympic sports -- comes to a misty, messy, thrilling close 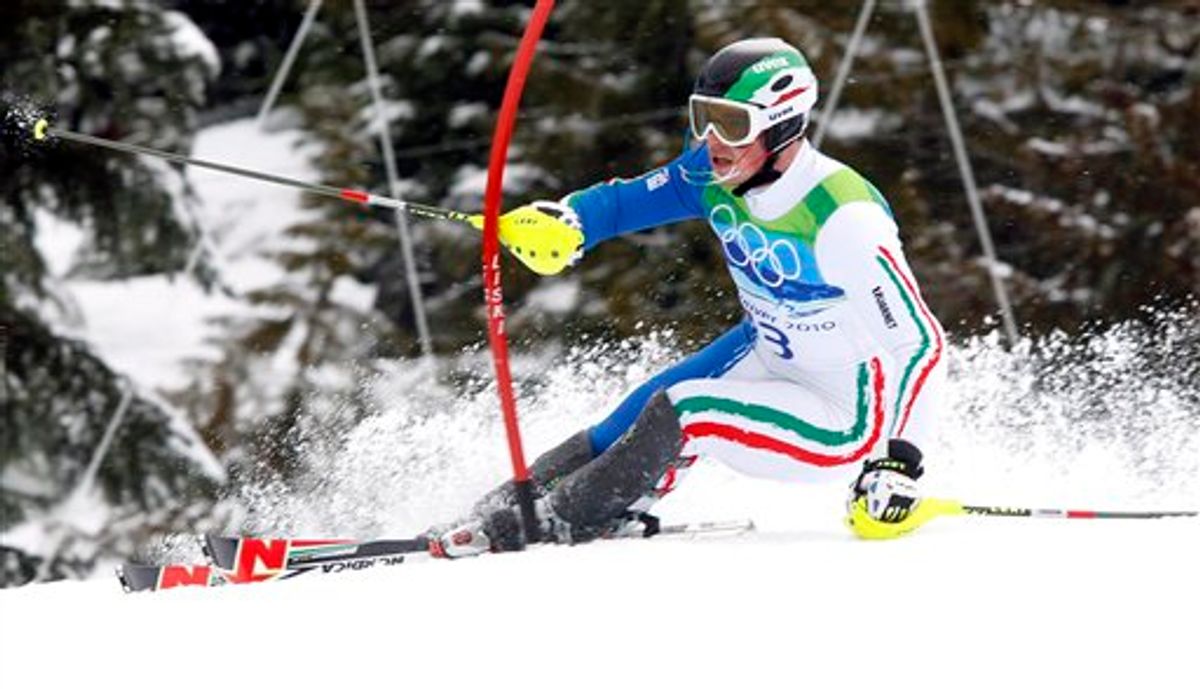 Italy's Giuliano Razzoli speeds down the course during the first run of the Men's slalom, at the Vancouver 2010 Olympics in Whistler, British Columbia, Saturday, Feb. 27, 2010. (AP Photo/Luca Bruno) (AP)
--

Ski events unfold like the history of the universe--a steady accretion of incident and accident. I'm watching the men's giant slalom, which falls near the end of the games, after many of the competitors have already won, lost, or skied away. (As Ricky Bobby said, "If you ain't first, you're last.") The NBC broadcast is shaped around the Americans, and the quest for gold, so, about 30 minutes in, when Bode Miller, chasing his fourth or fifth medal--I lost count back there on the road--hooked a ski around one of the gates, and limped (or the on-skis equivalent of the limp) off the course--presumably toward après ski, where a John Denver like guy sings as waitresses carry orders of smothered nachos--the show was mostly over. Bob Costas interviewed Lindsey Vonn, then the Olympic caravan, and it really is a circus train--this car holding the gorgeous women of curling, that car holding the Fins who play hockey--rolled on.

The condition of the mountain was not great. It had been warm, and a mist rose from the ground like the souls of dead skiers, and the snow was soft, and fog crowded in the dips, so the skiers seemed to appear and disappear as they made their way down. It was ghostly, that's what I'm trying to say. Before the first run, guys who specialize in the science of snow went around throwing pellets of nitrate or something, which was supposed to bind the snow. If it's soft, you fall--simple as that. And, in fact, skier after skier hooked or slipped and was gone. It's a truth about the sport. Above it, around it, hang menace, the threat of wipeout, high speed maiming or death. It's something that has always attracted me to downhill events: the stakes are high. To my mind, it's the purest sport in the Winter Olympics. You have to be crazy, but smart, too. It's like Gene Hackman (coach) says to Robert Redford (athlete) in that silly but great movie (screenplay by James Salter) "Downhill Racer": "Yeah, you ski fast, but you're reckless. You never really had an education, did you? All you ever had were your skis. And that's not enough."

With each run, the chance of disaster increases. The course gets icy and treacherous as the day goes on, with competitors slicking up the grooves. What's more, by the time you get to the end of the pack, the good times have been established so the skiers know just how fast they have to go to have a shot--how all-out daredevil. It's a great metaphor for life: how a skier, who just clocked the fastest time, waits to see if he will be bested, fearing he will be bested, that his triumph is about to be put in a new and diminished light. I often wonder if these skiers, sitting, for a moment, atop the board, enjoy their lead knowing the situation will change, because the situation will change. This was the case with a 32-year-old Slovakian named Mitja Valencic – he set a breakneck pace, and was beautiful, but you could tell, watching him, in his ski suit, and really, these things are too damn tight, he knew it would not hold up.

There were many crack-ups, especially in the first heat: Bode Miller, who stumbled then ditched, like a pilot with a punk engine ("Shut up and die like an aviator!"); Ted Ligety, the other American, who caught a gate, came to a stop, then floated sadly down to his parents, who looked even more bummed than the kid; and, most spectacularly, Austrian Manfred Pranger, who seemed goofy in his head shot, like he had just been arrested, but was not unhappy with that fact, cause think of the story--he caught air coming around a gate, was launched; you could see his face, and it had that terrible expression of "Oh no, it's over!" He landed on his spine, slid, then lay still, as if thinking, "Back to the applications."

In the end, the gold was taken by an Italian named Giuliano Razzoli. He was the perfect skier, and you could not watch him without imagining all those youthful days in the Italian alps, buried in snow, out in the bars and restaurants of the little ski towns. Well, he will be a prince now, the king of all that. I cannot imagine a better life. I honestly can't.

But the real star was Whistler itself, beautiful in hi-def, all those pixels showing the world as the world would look if you were an elite skier, the valleys opening as you clear the first rise, distant peaks wispy in the fog, making these look like the sort of mountains you expect to see the rebel armies emerge from, one warm summer day, when the real games begin.