Zoe FitzGerald Carter talks about the question no one wants to face: How to help your mother plan her own suicide 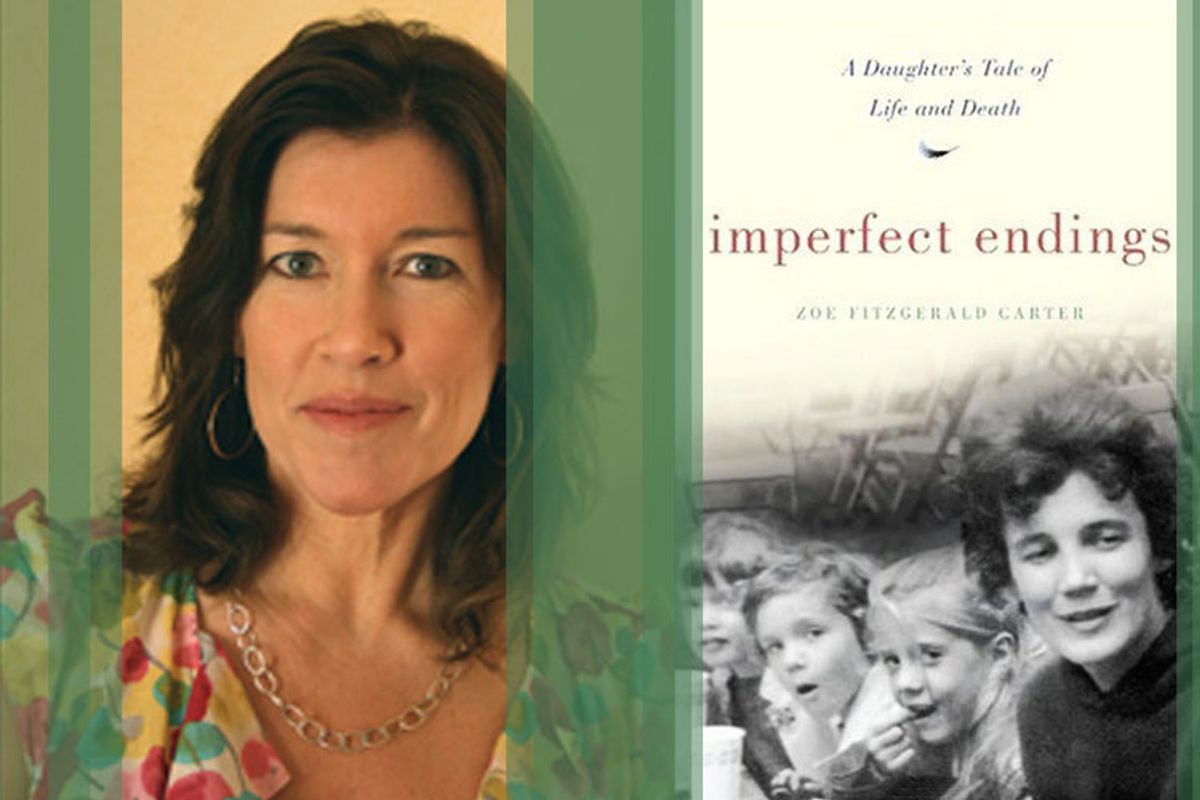 As a child, Zoe FitzGerald Carter was morbidly fascinated by the question of how it would be best to die: Shot or burned? Drowned or hanged? Dropped from an airplane or left in the desert with no water?

Decades later, her mother, Margaret, her body wracked by Parkinson’s disease, was pondering the same question. As Carter details in her gripping new memoir, "Imperfect Endings: A Daughter's Tale of Life and Death," Margaret considered an equally grim menu of release: Take an overdose of morphine or sleeping pills? Suffocate on helium or stop eating and drinking? While uncertain about the best method of escape from her debilitating disease, Margaret did know two things: She was going to take her life, and she wanted her three daughters to be present when it happened.

In the wake of her mother’s request, Carter found herself caught between respecting her mother’s desire for a good death and wanting to keep her alive, between supporting the right to die and feeling terrified about the legal ramifications, and between taking care of her mother on the East Coast and tending to her husband and two young children on the West Coast. (Full disclosure: Carter is a friend and member of my writing group.)

Salon spoke to Carter over the phone about her support for assisted suicide, about finding humor in a dark subject, and what it’s like to plan the death of a loved one.

What compelled you to write this memoir?

The experience of having my mother take her life was enormously difficult and raised a lot of questions about what it meant to be a good daughter; I wasn’t sure if that meant trying to talk my mother out of killing herself, or helping her do it. I wrote the book in part to better understand that dilemma.

I also knew that lots of people were going through some version of my story. There are 75 million baby boomers and many have parents who are getting old or sick. I felt that telling my story, warts and all, might offer some solace to others who are facing these difficult, often heartbreaking end-of-life decisions.

But not that many have parents who kill themselves.

True, although some version of "hastened death" may be more common than we think. And whether a death is "natural" or "assisted," going through this process with a parent can be isolating. Whenever I talked to people about the book, I was amazed at the outpouring of stories and emotions. It made me think that there's a hunger to have these conversations, maybe because death is so hidden away and even shameful in our culture. Often people disappear into hospitals instead of dying at home with their families.

And many people end up having to make difficult choices for their parents because everyone was too uncomfortable to discuss death ahead of time. I was fortunate that in the last year of her life my mother talked about nothing else! Planning her death was her last great project.

Do you think the debate about legalizing assisted suicide has been a productive one?

In my experience, people fall into three basic camps on the issue: First, those who say, "Assisted suicide should be legal! I should have the right to die however and whenever I want!" Second are the people who believe suicide under any circumstances is a sin. And the third group worries that making assisted suicide legal would somehow condone it and even put pressure on people with disabilities or illnesses to take their own lives.

All of these perspectives are valid. I’m just not sure that any of them is going to help you if your parent is in terrible pain or suffering. Especially if they are explicitly asking for help ending their life. At this point, families are left to negotiate a "Sophie’s Choice" of either watching their loved ones suffer or entering the murky, guilt-producing world of "hastened death." And unless they live in Oregon, Washington or Montana, they also have to worry about breaking the law.

How did you react when your mother raised the issue of assisted suicide?

I had thought it was a personal right and should be legal, but suddenly I wasn’t nearly as clear about it. I loved my mother and wanted her around and I believed that her life still held meaning and pleasure. She lived in her own home, she had wonderful round-the-clock care, and she had friends and family.

I also wasn’t sure how seriously to take her. More than once, she changed her "death date," which made me think talking about suicide was a ploy for attention. But when she joined the Hemlock Society (now called Compassion and Choices), met with a volunteer who was willing to help her kill herself, and got a suicide-friendly psychiatrist to prescribe her a lethal dose of Seconal, I began to understand how determined she was. And so, after months of trying to talk her out of it, I accepted her decision and even admired her for being so strong and unblinking in the face of death.

Do you still support assisted suicide?

I support people’s legal right to die, but I don’t consider myself the poster child for it. I worry about the toll it takes on family members as well as on doctors, nurses and hospice workers. While it might be the compassionate and even moral thing to do in some circumstances, we shouldn’t underestimate the burden it places on people.

I’ll never forget how haunted one of my friends was after he helped his father to die. His father was in the advanced stages of ALS -- a terrible, debilitating, progressive disease -- and had made his desire to die very clear, but months later, my friend still felt agonized by it.

How would things have been different if assisted suicide had been legal where your mother lived?

I think she might have stayed alive longer if she’d known she could call a trusted doctor and die in a quick and painless manner at a time of her choosing.

It also would have been easier for her three daughters if we hadn’t had to worry about the legal ramifications, which left us feeling secretive and afraid. It would have made it easier to focus on what her death meant emotionally, and to feel our grief and loss. The way it finally unfolded avoided legal issues, but it was protracted and difficult for all of us.

It’s funny. I had to put my dog to sleep last summer and I was struck by how quick and painless it was. Most people feel fine about offering this option to animals, but not to people -- even mentally competent people who are determined to end their lives. Start talking about helping people die, and we immediately worry that someone else is going to make the decision for us – remember "death panels"? But in places where it has been legalized, there are very strict guidelines to prevent this and, in fact, relatively few people end up taking this option.

Despite the serious subject matter, your book is surprisingly funny.

One thing about my family, we’re all incredibly blunt and outspoken, but there is humor mixed in. So I could say to my mother, "Stop worrying about pruning the trees in your backyard. You’re going to be dead soon. Relax." And far from offending her, she delighted in that.

There were also bizarrely funny moments. The volunteer from the Hemlock Society -- a good old boy named "Bud" -- came to my mother’s house to demonstrate what they called "death with dignity." It involved a helium canister, some tubing and a dirty white headband.

What was it like to spend so much time with someone you love, knowing that they were going to die soon?

I think the time you spend with someone who is dying is extraordinary. I was with both my parents when they died and witnessing that profound event in their lives was incredibly moving. There is a way that you love someone when they are dying that is very pure, very uncomplicated and incredibly healing. All the old resentments and difficulties disappear. For many of us, it’s the first time since childhood that we unabashedly tell our parent how much we love them. It has the simplicity of the instinctive bond you have with an infant. You just want to protect and love them.

What advice would you give to someone who has an elderly parent who wants to die?

I don’t feel like I’m an expert who can give advice. I’m just telling my personal story. That said, I would encourage really listening to what your parent is saying. Take their wishes seriously and then figure out what you can and cannot offer them. If you do what feels right, you will feel at peace after they’re gone.