Rescuers struggle to save lives after Chile quake 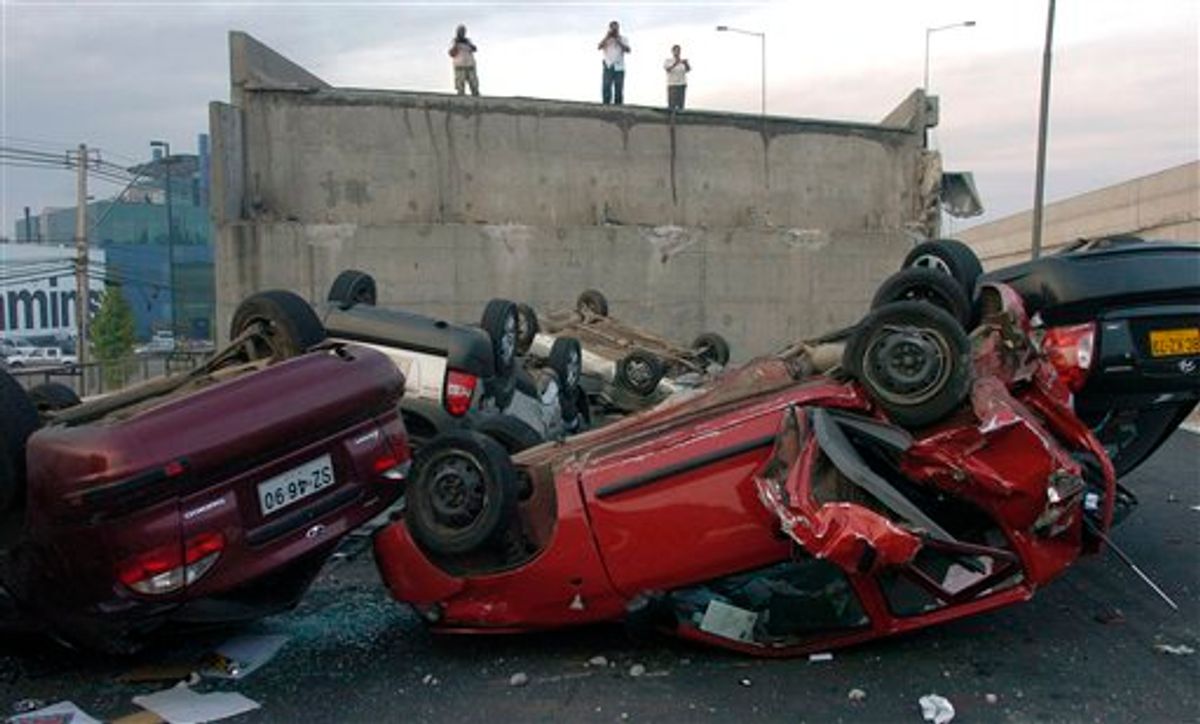 Vehicles that were driving along a highway that collapsed near Santiago are seen overturned on the asphalt Saturday, Feb. 27, 2010 after a powerful earthquake struck central Chile early Saturday.(AP Photo/Carlos Espinoza) (AP)
--

Rescuers edged their way toward quake victims trapped in a toppled apartment block early Sunday even as looters stole food and robbed banks after one of the strongest earthquakes ever recorded struck Chile.

Authorities put the death toll from Saturday's magnitude-8.8 quake at 214, but believed the number would grow. They said 1.5 million Chileans were affected and 500,000 homes severely damaged by the mammoth temblor.

A tsunami caused by the quake that swept across the Pacific killed several people on a Chilean island but caused little damage in other countries, after precautionary evacuations of hundreds of thousands of people. The tsunami warning was lifted a day after the earthquake.

President Michelle Bachelet, who leaves office March 11, declared a "state of catastrophe" in central Chile. "It was a catastrophe of devastating consequences," she said.

Police said more than 100 people died in Concepcion, the largest city near the epicenter with more than 200,000 people. The university was among the buildings that caught fire around the city as gas and power lines snapped. Many streets were littered with rubble from edifices and inmates escaped from a nearby prison.

Police used water cannon and tear gas to scatter people who forced open the doors of the Lider supermarket in Concepcion, hauling away everything from diapers to dehydrated milk to a kitchen stove.

Across the Bio Bio River in San Pedro, others cleared out a shopping mall. A video store was set ablaze, two automatic teller machines were broken open, a bank was robbed and a supermarket emptied, its floor littered with mashed plums, scattered dog food and smashed liquor bottles.

The largest building damaged in Concepion was a newly opened 11-story apartment that toppled backward, trapping an estimated 60 people inside apartments where the floors suddenly became vertical and the contents of every room slammed down onto rear walls.

"It fell at the moment the earthquake began," said 4th Lt. Juan Schulmeyer of Concepcion's 7th Firefighter Company, pointing to where the foundation collapsed. A full 24 hours later, only 16 people had been pulled out alive, and six bodies had been recovered.

Rescuers heard a woman call out at 11 p.m. Saturday from what seemed like the 6th floor, but hours later they were making slow progress in reaching her. Rescuers were working with two power saws and an electric hammer on a generator, but their supply of gas was running out and it was taking them a frustrating hour and a half to cut each hole through the concrete.

"It's very difficult working in the dark with aftershocks, and inside it's complicated. The apartments are totally destroyed. You have to work with great caution," said Paulo Klein, who was leading a group of rescue specialists from Puerto Montt. They flew in on an air force plane with just the equipment they could carry. Heavy equipment was coming later along with 12 other rescuers.

The quake tore apart houses, bridges and highways, and Chileans near the epicenter were thrown from their beds by the force of the mega-quake, which was felt as far away as Sao Paulo in Brazil -- 1,800 miles (2,900 kilometers) to the east.

The full extent of damage remained unclear. Ninety aftershocks of magnitude 5 or greater shuddered across the disaster prone Andean nation within 24 hours of the initial quake. One was nearly as powerful as Haiti's devastating Jan. 12 earthquake.

In the village of Reumen, a tractor trailer slammed into a dangling pedestrian overpass and 40 tons of concrete and steel crunched the truck, covering Chile's main highway with smashed grapes, tomatoes and cucumbers -- one of several overpasses toppled along the highway.

Truck driver Jaime Musso, 53, thought his truck was being buffeted by strong winds and by the time he saw the overpass hanging down over Highway 5 there was no chance of stopping, so he aimed for the spot where he thought he would cause the least damage and brought down the overpass onto his truck. He said he survived "by millimeters."

As night fell Saturday, about a dozen men and children sat around a bonfire in the remains of their homes in Curico, a town 122 miles (196 kilometers) south of the capital, Santiago.

"We were sleeping when we felt the quake, very strongly. I got up and went out the door. When I looked back my bed was covered in rubble," said survivor Claudio Palma.

In the capital Santiago, 200 miles (325 kilometers) to the northeast of the epicenter, the national Fine Arts Museum was badly damaged and an apartment building's two-story parking lot pancaked, smashing about 50 cars.

Santiago's airport was closed and its subway shut down. Chile's main seaport, in Valparaiso, was ordered closed while damage was assessed. Two oil refineries shut down. The state-run Codelco, the world's largest copper producer, halted work at two of its mines, but said it expected them to resume operations quickly.

On the mainland, several huge waves inundated part of the major port city of Talcahuano, near hard-hit Concepcion. A large boat was swept more than a block inland.

The surge of water raced across the Pacific, setting off alarm sirens in Hawaii, Polynesia and Tonga, but the tsunami waves proved small and did little damage as they reached as far as Japan.

Robert Williams, a geophysicist at the U.S. Geological Survey, said the Chilean quake was hundreds of times more powerful than Haiti's magnitude-7 quake, though it was deeper and cost far fewer lives.

The largest earthquake ever recorded struck the same area of Chile on May 22, 1960. The magnitude-9.5 quake killed 1,655 people and made 2 million homeless. Saturday's quake matched a 1906 temblor off the Ecuadorean coast as the seventh-strongest ever recorded in the world.