How "The Bachelor" hooked us -- again 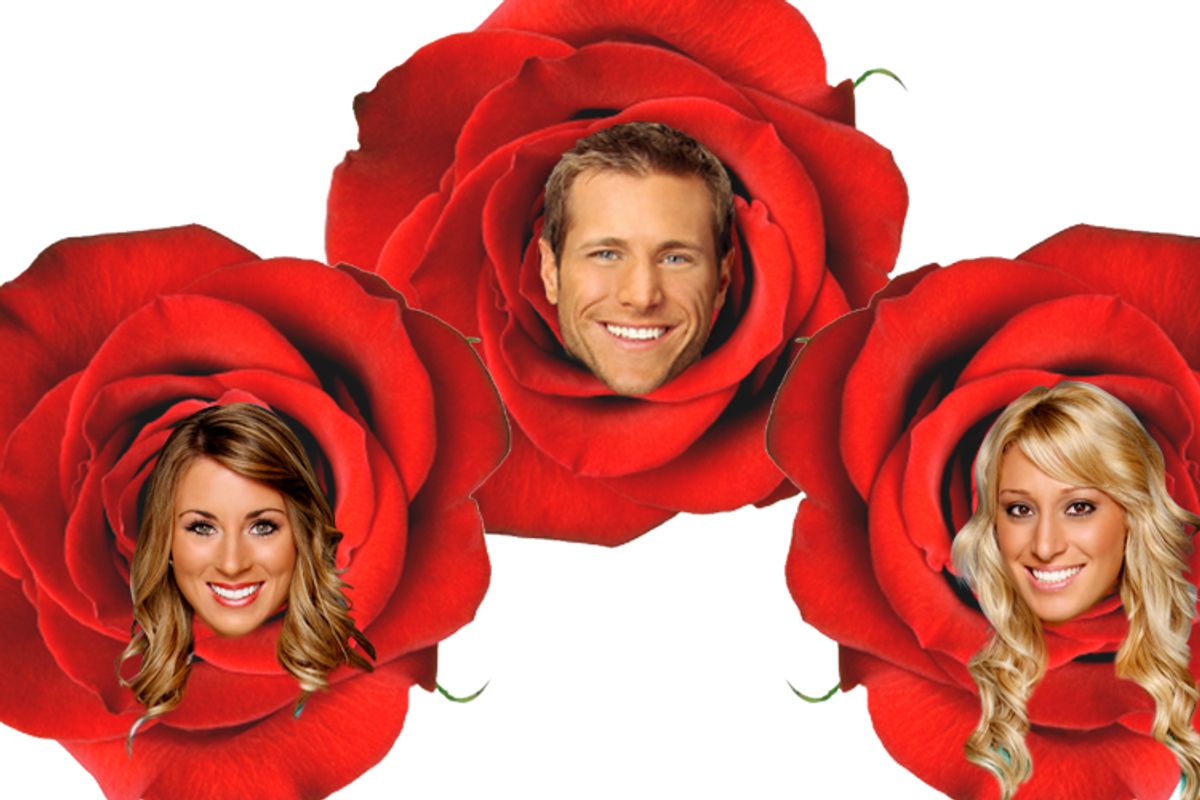 Two years ago, "The Bachelor" showed all the signs of a franchise in a death spiral. Once a lightning rod for tabloid gossip, parody shows and feminist rage, "The Bachelor" was overshadowed by devious celebreality stunts like VH1's "Rock of Love" and "Flavor of Love," which gave audiences all the cleavage and bitchery without the beauty pageant primness and votive candles. "The Bachelor" shrank its season, trotted out new stripes of man candy -- a naval officer, a prince, Jerry O'Connell's brother -- and globe-trotted to Paris and Rome, but nothing stuck. It had become something unforgivable in the must-shock world of reality television: It had become boring.

But never underestimate the tug of romantic fantasy during one of the worst recessions in modern memory. Last year, "The Bachelor" experienced an unexpected boom, and that was before the shockah of its season finale, in which single dad Jason Mesnick proposed to one woman, only to take it back in the finale (he recently married the runner-up, Molly Malaney). This season, while VH1 sinks into its own creative rut (its latest dating show features a dude who lives in his parents' basement), "The Bachelor" has come roaring back -- enjoying a ratings boost and the sunshine of a tabloid stand near you. This year's hero is Jake, an airline pilot from Dallas with a slow Southern drawl and a vacation Bible-study doofiness. The season finale, which airs Monday night, finds him choosing between saucy temptress Vienna, a former Hooters waitress and the house's resident drama-stirrer, and Tenley, a girl so sweet she "farts rainbows," as one contestant memorably quipped. His is a classic virgin/whore dilemma; or, as ABC commercials put it: Will Jake choose sugar, or will Jake choose spice?

The appeal of "The Bachelor" is not vastly different from that of most shows in the reality TV universe: It is mind candy, benign voyeurism with a payout at the end of every 60 minutes. But "The Bachelor" is also about luurve, and so it has a special tug, that being a thing many of us spend countless hours trying to find or trying to hold on to. On the subject of love, the show is bizarrely, steadfastly earnest. "I am falling in love with all of these women," Jake said a few weeks ago -- in fact, contestants always say such things, which speaks either to the staggering capacity of the human heart, or the nonsense that will fall out of your mouth following three weeks in a sensory deprivation tank filled with rose petals.

"The Bachelor" is decidedly prim, especially compared to the crotch-grabbing, wig-ripping wildness of VH1 dating shows. Wine is sipped slowly. A night alone in the same bed isn't cheap sex, it's an "invitation to the fantasy suite." The show is coy and traditional; after all, its major payoff isn't money, or a recording contract, or your own show (that's the loser's payoff), it's that most sacred union: marriage. (How hilarious, how deliciously rich that beauty queens and conservative pundits bemoan the way same-sex marriage degrades the institution, while the most successful dating show in history dangles it like red meat in a den of lions.)

"In hard times, we want to be served stuff that is cheap and comforting: meatloaf, Campbell's soup and tales of women and men that conform to our most dated expectations of gender, money and power," wrote Salon's Rebecca Traister back in March 2009. She wasn't writing about "The Bachelor" (she was writing about a New York Times story about Dating a Banker Anonymous), but she might as well have been.

To watch "The Bachelor" (and "The Bachelorette") is to dip a toe into the lukewarm jacuzzi of a disappearing America -- straight, of course, almost entirely white, naturally -- where women parade their rockin' bikini bods and swear by their good Midwestern values. Even the cringe-inducing subtitle of the season, "On the Wings of Love," harks back to '80s glory days. There are bad girls in the mix, of course: This season the icily beautiful Rozlyn got caught in an "inappropriate relationship" with a producer, who was later sacked. ("The biggest TV scandal of 2010!" the show had the gall to call it, in February.) "The Bachelor" was vague on the details, but whatever she did, she was guilty of the worst affront possible in the "Bachelor" universe: She was not here for Jake. (She also zinged "Bachelor" host Chris Harrison during the annual "Women Tell All" pantomime, accusing him of hitting on the fired producer's wife. This was either proof that she was a nasty hussy, or one more brave but futile attempt to puncture the big, fat charade of the entire show.)

Rozlyn's departure shook the show to its very puritan core. In a deliriously odd segment, Chris Harrison informed the women of Rozlyn's indiscretion, and they listened with their brows furrowed, some of them wiping tears from their eyes at the cruel injustice. "I just can't believe she could do that to Jake," one of them hissed. And then, Jake spent the next month making out with each of them.

Despite the cynical male fantasy at its core -- a harem of women at your command! -- "The Bachelor" is not a show engineered for men. (Although one guy told me I'd be surprised how many married men watch it.) It is a show beloved primarily by women. "Chilling," one friend called it. "The sickest thing about women is how we judge each other based on our relative value to men. Period." But it's hard to deny a thrill to the show, which packs all the gossip, intrigue and scheming of a college dorm into one crack-pipe hit of Schadenfreude.

"I just like watching other girls get dumped for a change," one friend told me bluntly. "It's comforting to know rejection happens to us all."

Yes, it doesn't matter how gorgeous you are, the magic you felt while riding horseback or sailing on the yacht or flying over the volcano, most women leave the show in the crying cab, weeping black rivers over their "real connection." It's all so obvious from the couch -- the game is rigged, as "The Wire" would tell you, now will you stop looking for love on national TV? -- but of course we too have flung ourselves carelessly into doomed relationships, we too have "opened up" to men who were not available, men who could not be changed, men who did not feel the same, men who we thought we were in love with primarily because we both adored Thai food, "The Sopranos" and Radiohead.

At least in the world of "The Bachelor" there is a code and a system in place, as opposed to the confusing fog of real-life romance, in which Facebook messages and texts get read closer than the New Testament and you rarely know where you stand with someone else. "I think people fantasize about a dating world where the rules and procedures are not ambiguous but that still has the illusion of choice," the writer Mikki Halpin told me. "You know what a rose means, versus a rose in real life: What does that mean? Does he or she give everyone a rose after the first date? The icing on the fantasy is that under these rules everyone is getting a fairish chance, and that the winner is being chosen freely."

"The Bachelor" has a hilarious insistence on adhering not only to these rules but to its own wackadoo internal logic -- in which falling in love with multiple women at once is a sensible recipe for a lasting marriage, in which romantic transactions must be brokered through  Harrison or delivered via carrier pigeon -- and I suppose as such, it's less old-fashioned than simply Harlequin bizarro land, a timeless world of orange sunsets and private beaches, a place that can be depended on for the same easy softcore thrills of soap operas and Summer's Eve commercials.

Where "The Bachelor" fails miserably is acknowledging the real world at all. A recent segment in which former contestants volunteered at a food bank was not only a parody of charitable giving -- "I saw so many people who were hungry, and it felt good in my heart to give to them," cooed one former "Bachelor" contestant, a pink silk scarf draped around her neck just-so -- but it made the grave mistake of introducing us to real people who didn't even have the common sense to get spray tans and manicures and squirt Botox between their brows. These were women struggling to put food on the table, weathering the indignity of unemployment, of double shifts and intractable poverty. Suddenly the mansion's set had been dismantled, the waterfalls disappeared, and we were stranded in miserable, recession-riddled America. And it was so depressing.

Meanwhile, in the la-la land of "The Bachelor," season favorite Ali, who left the show early to avoid losing her job (apparently a good one, at Facebook), said with steely conviction that, had she to do it all over again, she would choose love over her career. "I loved Jake," she said over and over again. "I don't want to look back and say, I didn't love enough. I want to put love first." Choosing a reality show hunk over your cush job during an economic crisis is a gobsmackingly dumb decision, but it's also a great story. Ladies and gentlemen, I think we've found next season's "Bachelorette."