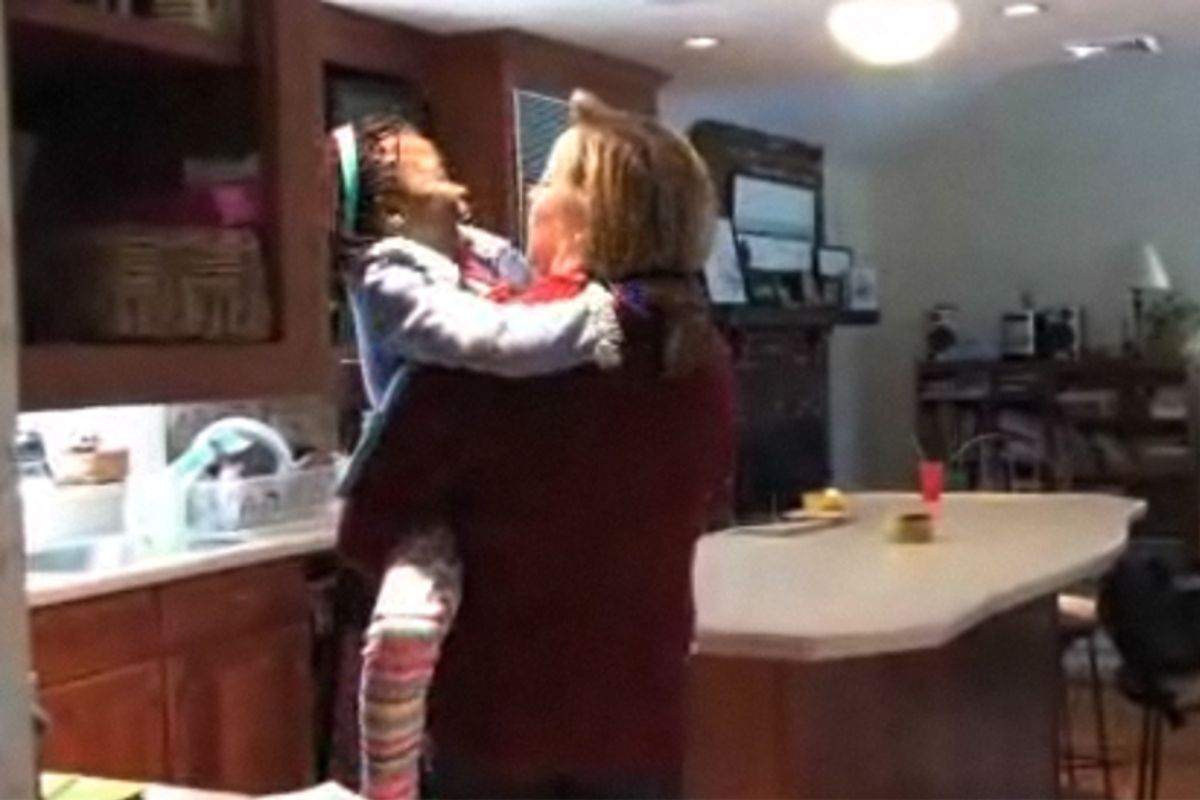 On Saturday, the Boston Globe ran a beautiful, provocative, complicated photo above the fold on the front page. A dark-skinned girl with a purple headband and a huge grin hugs a white woman with strawberry-blond hair.

They're sitting on an oriental rug that's covering a hardwood floor. The caption: "Wislandie, an 8-year-old orphan from Haiti, is right at home with adoptive mother Beth Wescott of North Andover."

I love this picture. I'm an adoptive mom myself, so it's a relief after all the mug shots of misguided missionaries trying to smuggle children out of Haiti. In the video that accompanies the online version of the story, "A New Home for Wislandie," adoptive mom Beth gently rocks a little girl who is lively and mischievous but also clearly in need of comfort.

Yet the Globe's photo spread, video and story by Maria Sacchetti -- "Joy, Frustration Brought Home" -- raise big questions for me, too, because of all that isn't said or shown. This front-page feature, more than all the press about those criminally ignorant Baptists, exemplifies the cognitive dissonance that's part of transracial adoption.

Why is the white-savior storyline so entrenched? And why is it so hard for the "objective" journalistic voice to talk about race?

The racial difference of Haitian adoptees and their adoptive parents isn't mentioned once in this story. Perhaps the photo and video are supposed to lay that issue on the table -- and they do -- but the story frame is the usual one of dedicated church members (Wislandie's adoptive father is a pastor) visiting Haitian children in a Christian orphanage in Port-au-Prince.

To be fair to Wislandie's new parents and the orphanage (the Marion Austin Christian School) and this story, "about 10 Boston-area churches regularly send mission groups to help at the school," Sacchetti writes, and the connection prospective adoptive parents have formed with children apparently often goes back to when they were toddlers. Many of the prospective adoptees are in their teens.

Before the earthquake, some adoptions were already in process; according to the article, a few, like Wislandie's, have been successfully completed. But other potential adoptive parents and adoptees wait, mired in even more bureaucratic red tape, as conditions for the orphanage children worsen. (In this same issue of the Globe, the story above Sacchetti's, after the jump inside, is headlined "Haiti Wants Refugees Back in Ravaged Areas.")

Yes, why not? The rhetorical question rings true in the most immediate way for longtime orphans. Seventeen-year-old Auguste Joseph wants to join his frustrated adoptive parents in Ashby, Mass. Like other kids in the orphanage wearing Red Sox T-shirts, Auguste is quoted as saying, "I'm dying to go ... I've been waiting for a long time."

But for many of us in the international adoption community -- adoptees, adoptive parents, birth parents and adoption workers -- this question is far from simple. After "why not?" I also wonder, "what next?"

There are hints of the dissonance to come in an evocative description at the end of the Globe feature: Wislandie is now wearing pink Crocs and has a bedroom of her own. "It is not an easy transition," Sacchetti writes; the girl's adoptive parents "look alternately joyful and exhausted."

Most haunting: "Even though she has so much now, Wislandie insists on dividing every snack or sandwich, to give away half to her mother, father, or sister."

The story then closes with her adoptive mom insisting, rightly, that her daughter isn't the only one who has lucked out.

Yet this is really just the prologue. The rest of the real story, which varies with every transracial adoptee and his or her particular family circumstances, is full of complications of race and culture and loss that apparently can't be accommodated in a mainstream news feature.

Here's where I have to ask: Why not? Why can't a daily paper like the Boston Globe, in a metropolitan area that includes a large Haitian immigrant population, tell this story as more than one white family's joy and the frustration of other waiting white families?

At least one caller to a Jan. 20 NPR show, "Where Will All the Haitian Orphans Go,?" raised issues of cultural and homeland loss. These were treated seriously by Tom DiFilipo, CEO of the Joint Council on International Children's Services, the guest on this edition of "Talk of the Nation."

Other sources, such as ColorLines' blog RaceWire, have grappled with the racial question of whites adopting Haitian orphans. And as one topic on the Haitian Internet Newsletter, "Haiti's Orphans, What Are We Going to Do About It?," puts it:

Let me ask you a question: Do you really think that the rest of the world will just fly to Haiti and take all these Haitian kids into new homes somewhere outside of Haiti so they can live happily ever after?

The orphan children of Haiti are Haiti's problem and now is the time to start talking about how we're going to deal with it.

This is our country, these are our kids ...

Discussions about race and culture and international adoption are all over the Internet and in various blog and editorial forums, even in mainstream press outlets. But you wouldn't know it from this Globe feature about Wislandie.

Interestingly, a number of the online comments to the story have been negative, pointing out snidely that there are American black kids waiting for adoption, too. That kind of knee-jerk response flips too far in the other direction, but it's obvious that readers and video-watchers are reacting immediately to the racial difference.

You could argue that daily news features are really people stories. Americans adopting orphans from countries like Haiti or Vietnam (as in my own family) can surely be heartwarming. I would argue, however, that journalists make decisions all the time about whom to focus on and what main idea to follow.

Simplifying the emotional storyline by focusing on getting home to America has political and social implications. It seems to deny that differences of race and culture matter. And I don't think daily news is off the hook for promulgating musty stereotypes, letting anonymous online commenters criticize a story subject or go out on a limb rather than reporting on what this white mother, for example, thinks about parenting a black child.

Of course Wislandie is happy to be free of the current devastation in Port-au-Prince, where many families huddle under nothing but bedsheet tents as the rainy season approaches.

Yet what will she think of her homeland as she gets older? Will she make connections with the local Haitian community in Boston and Cambridge? Will she keep speaking French and Creole? Will she realize that Haiti has a rich history and literature, a complicated history, that  is not just defined by poverty and disaster?

That is the international adoptive parenting journey. It is very possible that Wislandie's adoptive mom and dad will help her along the way. In the video, Beth holds the girl close and talks realistically about adjustment challenges and the scene in Haiti.

But not until I read more mainstream stories that dig into white adoptive parents talking about race, and not until I hear more about the links that can be forged between adoptees and the Haitian American community, will I believe that the discussion about international adoption has moved beyond saving those poor lucky kids from a place better left behind in the rubble.