Making a whale into a killer

In the wake of the SeaWorld attack, an expert explains how captivity drives orcas crazy -- and can turn them deadly 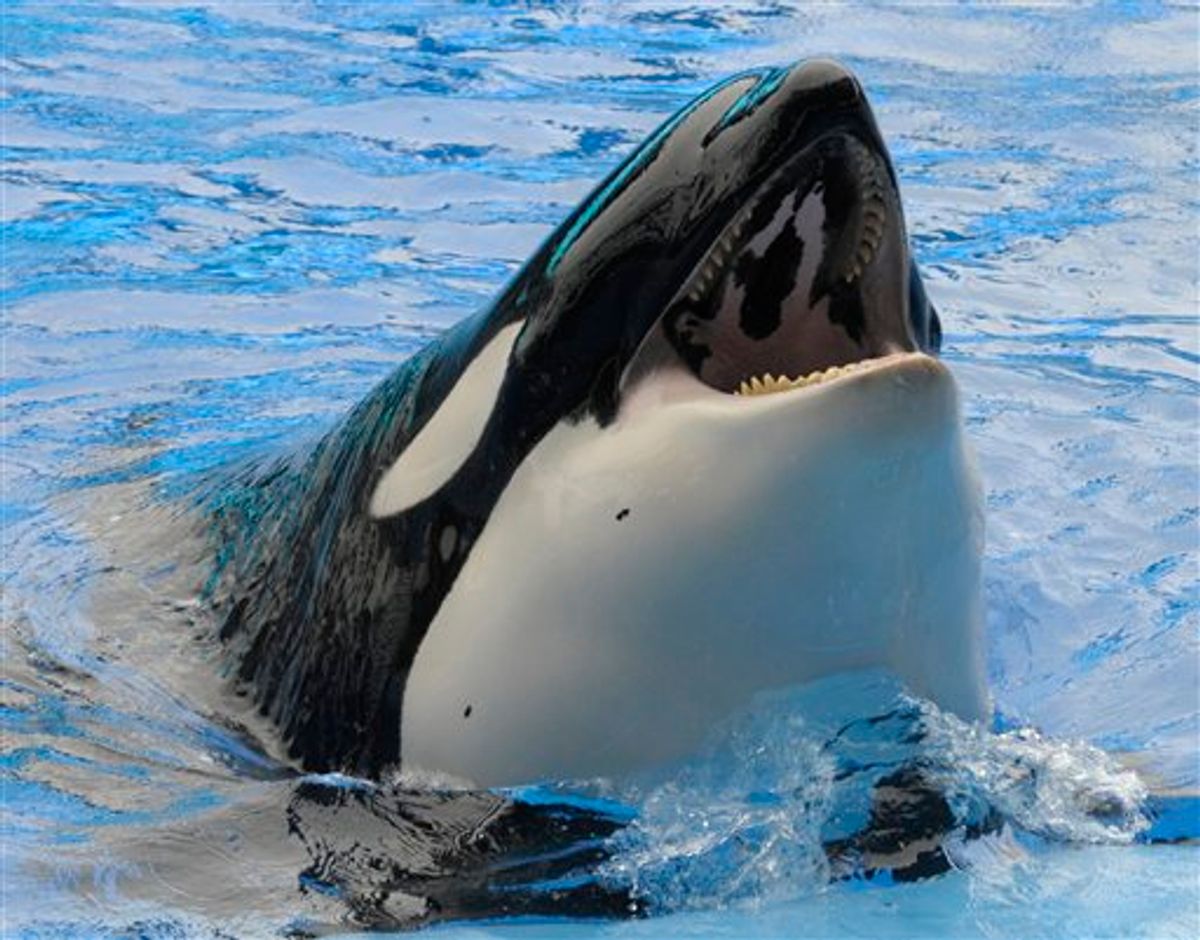 A killer whale raises its head out of the water Saturday, Feb. 27, 2010, during the first show since an orca killed a trainer at the SeaWorld theme park in Orlando, Fla. (AP Photo/Phelan M. Ebenhack, Pool) (AP)
--

On Wednesday, a female trainer at SeaWorld was killed when a 12,000-pound orca named Tilikum ("Tilly") grabbed her by the ponytail, dragged her under water, and thrashed her about in his jaws. Twenty audience members, lingering after a production of "Dine With Shamu," witnessed the act. It was the third human death Tilly has been involved in, and yet the park has no intention of euthanizing him, partly because his motives were unclear. Was his intent to kill, or was it an accident, the result of roughhousing with a mammal 1/100th his own size?

No one knows. But the stresses of captivity seem responsible. Captive orcas often decline to eat, and are force-fed until they do. And while there are no known cases of an orca killing a human in the wild, around two dozen cases exist of captive orcas attacking humans.

In response, SeaWorld, whose brand-image depends on friendly-looking killer whales, has found itself in a public-relations quandary akin to what Accenture experienced with its “Go on. Be a Tiger” ads. And yet it’s been suggested that Wednesday’s death may generate a new audience for the park -- that of teens and young adults, enlivened by the possibility of violence.

Salon recently caught up with Philip Hoare, author of the nonfiction book "The Whale," to discuss our relationship with orcas, the toll captivity takes on whales, and the continued risk it poses for human beings.

Some whale experts have said that if Tilly was aiming to kill his trainer, he would have done something more gruesome. But how can we tell if an orca is playing rough or trying to cause harm?

Well, other whales have been known to go too far in their play with humans. Pilot whales off Madeira, in the Atlantic, have been known to drag swimmers down to the depths, apparently heedless of their need for air. But just watch what an orca does with a seal kill. It's tossed in the air -- orcas often play with their food before eating it. It is evident that they get off on that! I think you're right, though. We can't tell. No orca would regard a human as food. They're much too smart for that. Their sonar can diagnose if a woman is pregnant, for heaven's sake. I think that Tilly's behavior on balance does indicate a kind of cetacean psychosis. But until we perfect whale speak, we won't know.

Are whales in captivity more likely than other animals to get stressed out, or even become psychotic?

Well, here you've got species that are used to having an entire ocean -- if not the watery world -- in which to live and play. Dolphins -- and an orca is just an overgrown dolphin, really -- are addicted to play. It is an essential part of their social structure. (Dolphins are also one of the few species, after human beings, that have sex for its own sake.) Take away the stimulus of that vast, three-dimensional, near-gravity-free environment, and the social structures they have built up over millennia, and it’s obvious you're going to induce mental illness. Just look at the sea lions circling their pool in Central Park.

They want to please, like dogs. They need to exhibit creative behavior. We're artificially inducing that behavior, to our own needs. Trainers do have their animals' best interests at heart, of course. That poor woman in SeaWorld could never have thought her life would end that way. But you are only ever dealing with a wild animal, whose reactions are unpredictable, at base.

After Tilly and two female whales killed a trainer in Victoria, British Columbia, in 1991, Tilly was moved to Orlando, partly because the females were bullying him. Is orca-bullying common in the wild, or is it something induced by captivity?

Dolphins certainly bully other cetaceans. The resident bottlenose dolphins in the Moray Firth in Scotland, for example, have been seen beak-butting porpoises and tossing them in the air, just for fun. Hierarchical structures certainly exist within cetacean species, and possibly between the species, too. Artificial environments -- so confined -- are bound to induce aberrant behavior. Look at your local prison.

I guess what I want to say is that it is ignorance that's at the heart of the issue. But, of course, there's a certain beauty to that ignorance -- a reminder that we haven't worked everything out. A death in a Florida pool is too high a price to pay for that. But whales have suffered a two-century-long holocaust. The cumulative effects of that, on both our species, is unknowable. As Melville wrote: "Ah the world, oh the whale."

What uses did we have for orcas before aquariums and amusement parks came around?

In Australia, in the 20th century, shore whalers at Eden, on the coast of New South Wales, cooperated with a pod of orca, led by a bull male named Old Tom. The killer would herd humpbacks, passing on their migration, south toward the Antarctic. The unenlisted orca would corral the unsuspecting great whales into the cup of Two-fold Bay, where the human hunters would then row out to harpoon the whales. Sinking naturally to the shallow seabed, the orca would there be allowed to claim their prize: the humpback's tongue, the only part of the animal they relished. A day later, the dead whale, bloated with gas, would rise to the surface for collection by the whalers.

It was an efficient, if not cynical exploitation of both species of cetacean -- a counterpoint to this week's tragic events at SeaWorld. The truth is now as it's ever been: We need whales more than they need us.

When did we start domesticating whales this way?

Killer whales were first held captive for the purposes of entertaining humans in the 1960s. Since then, 200 killer whales have died in captivity. My first exposure to a living whale was at a safari park outside London, where Ramu, a newly captured orca, went through its routines. Even to a young boy, it was clear this wasn't the right way to treat a wild animal. Imprisoned in its overgrown swimming pool, its proud, 6-foot dorsal fin had flopped over, a symptom of stress and a symbol of its detumescent state.

Most zoo animals are euthanized immediately if they become dangerous, but SeaWorld is not euthanizing Tilly. Besides the fact that he’s a valuable commodity for SeaWorld, do humans just have a deeper affection for whales?

We certainly seem to react to whales in a different way. I think it's because of the paradoxical elusiveness of their nature. For all their massive size, we barely ever see them. We never know their reality. The latest research into cetacean intelligence places them only just after Homo sapiens, and above primates, in their capabilities. It's that not-knowingness that leads us on. Also, our guilt. We may feel the collective regrets of a collective history between our species. We know what we've done. The amazing thing is -- though when it comes to human beings, I guess this is no surprise -- that we go on doing it. More whales are dying now than ever died through whaling. We've just refined the ways we kill them. Exquisitely slowly.