Groups in decline, such as the white working class that controls the GOP, tend to focus on blocking change 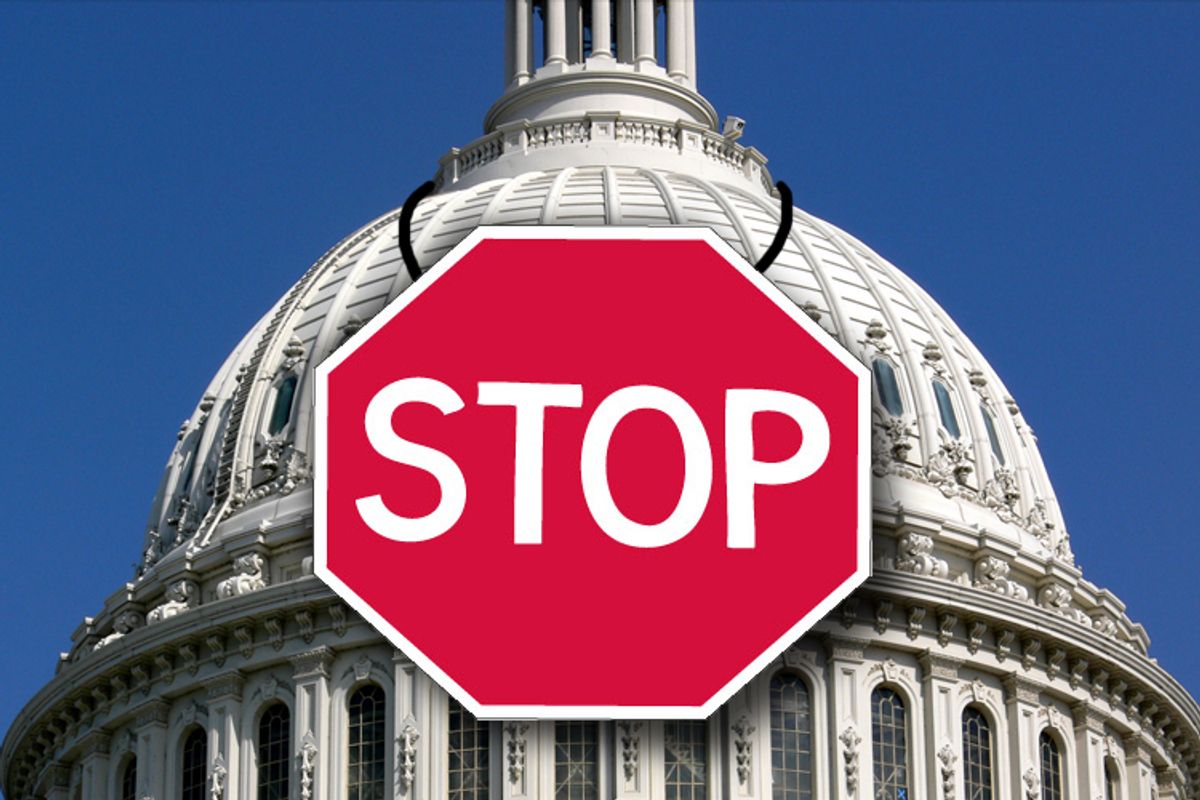 Why is the Republican Party insisting on gridlock in Washington? Why is the Republican minority in California blocking necessary change? The Beltway pundits who attribute everything to electoral cycle gamesmanship do not understand the deeper cause of this scorched-earth policy: demographic decline.

Having lost much of the white professional class to the Democrats (perhaps temporarily), the Republican Party is increasingly the party of the declining white working class. Non-Hispanic whites are shrinking as a percentage of the U.S. population. Meanwhile, the traditional skilled working class and lower middle class are shrinking as a proportion of the workforce, while the service sector proletariat and college-educated professionals increase their share.

To add insult to injury, the Democrats, instead of reaching out to white working-class voters, often have snobbishly dismissed them, as Obama did with his patronizing discussion of the "bitter" people.

In these circumstances, the American white working class quite naturally is experiencing "demographic panic." Declining groups experiencing such anxieties generally focus on blocking adverse change, using the political institutions they still control. Apart from hanging on to their power as long as they can, they usually do not have programs for governing the country, something they do not expect to be able to do in the long run.

This was the strategy of the antebellum Southern planter class, beginning in the 1820s. As immigrants poured into the North, where native white farmers also had high birthrates, Southern whites were increasingly outnumbered. By threatening to secede in 1820 (the Missouri Compromise) and 1850 (the Compromise of 1850), Southern politicians forced the rest of the country to acquiesce to the rule that slave states and free states must be equal in number in the Senate, even though slave-state whites were a shrinking minority of the population. When the rise of the Republican Party convinced them that this delaying tactic was doomed, the Southerners tried to secede and form a smaller union they would forever control.

Demographic panic also afflicted old-stock British Protestants in Northern states in the late 19th and early 20th centuries. Their fear that they would be displaced socially and politically by European immigrants, particularly by hated Irish Catholic immigrants, inspired Protestant nativism as early as the 1840s.

The Protestant nativists, like the Southern planters, sought to booby-trap Congress to maintain their political power in spite of their dwindling relative numbers. From the founding onward, after every census the size of the U.S. House of Representatives was adjusted upward, in order to accommodate the growing population. However, after the 1920 census, rural Protestant representatives in Congress prevented an expansion of the House that would have increased the influence of European immigrants and their descendants in the big cities.

In 1929, the size of the House was capped at 435, the number it reached after the 1910 census. Many democracies have lower houses of 600 to 800 members. The Anglo-Protestant nativists long ago lost their battle against Euro-Americans, but the small size of the U.S. House of Representatives is the legacy of their struggle to maintain their status and power.

This history underscores the irony that yesterday's ascending demographic force often becomes today's declining minority. The Anglo-American Protestants in the North and Midwest who crushed the Confederacy and dreamed of sending colonists to demographically and culturally Yankeeize the defeated South were themselves panicking half a century later over the prospect of becoming outbred and outnumbered by Irish-Americans and Italian-Americans in New England itself.

Many of the children of the European immigrants whom the old-line WASPs feared and despised moved up and moved west to California, where, assimilated and affluent by the 1970s, they pulled the plug on the funding of public education, once black and brown children who did not look like their kids began to fill California classrooms.

In a hundred years perhaps the relatively declining descendants of today's growing Latino constituency will unite with other groups to oppose the empowerment of 22nd century immigrants from other parts of the world.

If you believe that there is a long-term national interest distinct from that of particular groups, then the challenge is to prevent the groups that are in relative decline -- be they regions or ethnic or racial groups -- from trying to preserve their relative political power by using the veto points in U.S. government to bring the machinery of a government to a grinding stop.

The increasing mismatch between population and power in American government that underlies the present gridlock needs to be addressed by structural reforms. Here is what needs to be done.

Reforming the U.S. Senate: The radical yet perfectly constitutional solution to addressing the gridlock imposed by the small-population states is to subdivide increasingly under-represented large-population states like California, Texas, Florida and New York into smaller states, each with two senators.

The Constitution permits a state to voluntarily subdivide itself as long as Congress approves. In an article in Mother Jones a few years back, I proposed the voluntary subdivision of the large states to turn our present 50 states into 75 states. But the small states in the Senate would try to block any attempt to dilute their grotesquely disproportionate power by this voluntary and constitutional method.

The immediate goal of Senate reform therefore should be the abolition of the filibuster, which exists only because of the Senate's own rules and has no basis in our constitutional design. Small state populations would still have disproportionate influence even if all Senate legislation were passed by 51 percent majorities, but less than they do now, when the Republicans rule the Senate 41 to 59.

The House of Representatives: It is much easier to adjust the other house of Congress to make it more representative of the 21st century American majority. The membership of the House needs to be expanded. It is time to unfreeze the upper limit of 435 members.

Creating more congressional districts, each with a much smaller number of voters, will make it easier for you to actually meet your representative. And smaller districts reduce the need for out-of-state special interest campaign money to buy media in elections. The clock that the WASP nativists stopped in the 1920s should be restarted. After every census, the size of the House should be expanded, until it reaches 600 or even 800 members.

Majority-minority districts, intended to elect more black and Latino representatives, backfired by allowing Republican legislatures to divide white Democratic voters from one another and cram them into Republican-majority districts. Along with more Republicans, more black and Latino Democrats are elected, but at the price of fewer Democrats overall. The goal should be actual empowerment of minority voters, not rigging safe seats for minority politicians.

A single national primary: Why should candidates who appeal to the disproportionately white voters of Iowa and New Hampshire have an advantage over those with appeal in states like California and Texas, where non-Hispanic whites are now a minority? The presidential primaries should be replaced by a single national primary. Would this help candidates who are known quantities with name recognition? Let's hope so. No more Jimmy Carters.

I have written elsewhere that out of this time of troubles, as out of the Civil War and the Depression, may arise a reinvented and reinvigorated America -- a Fourth American Republic. But success is not foreordained. The demographically declining white constituencies who benefit from gridlock may prevent necessary reforms from being made by Congress for a while.

But needed reforms will be undertaken -- if necessary, by means of executive orders by future Caesarist presidents who circumvent the paralyzed Congress in order to get things done. And if the situation is desperate enough and the obstructionists in Congress are sufficiently despised, the new system of rule by presidential decree will be supported by public opinion and ratified by the federal judiciary, which generally follows public opinion.

If this came to pass, it would mark the transition from democratic republicanism in the United States to plebiscitary presidentialism. We would still have free and fair elections every four years, but in between presidential elections the country would be governed by decrees drafted by powerful but little-known White House advisors, many of them not subject to Senate confirmation.

The conversion of the U.S. into a banana republic would be complete, as the president became el presidente and the House and Senate were reduced to honorary debating societies. Instead of the Fourth American Republic, we would have the First American Principate.