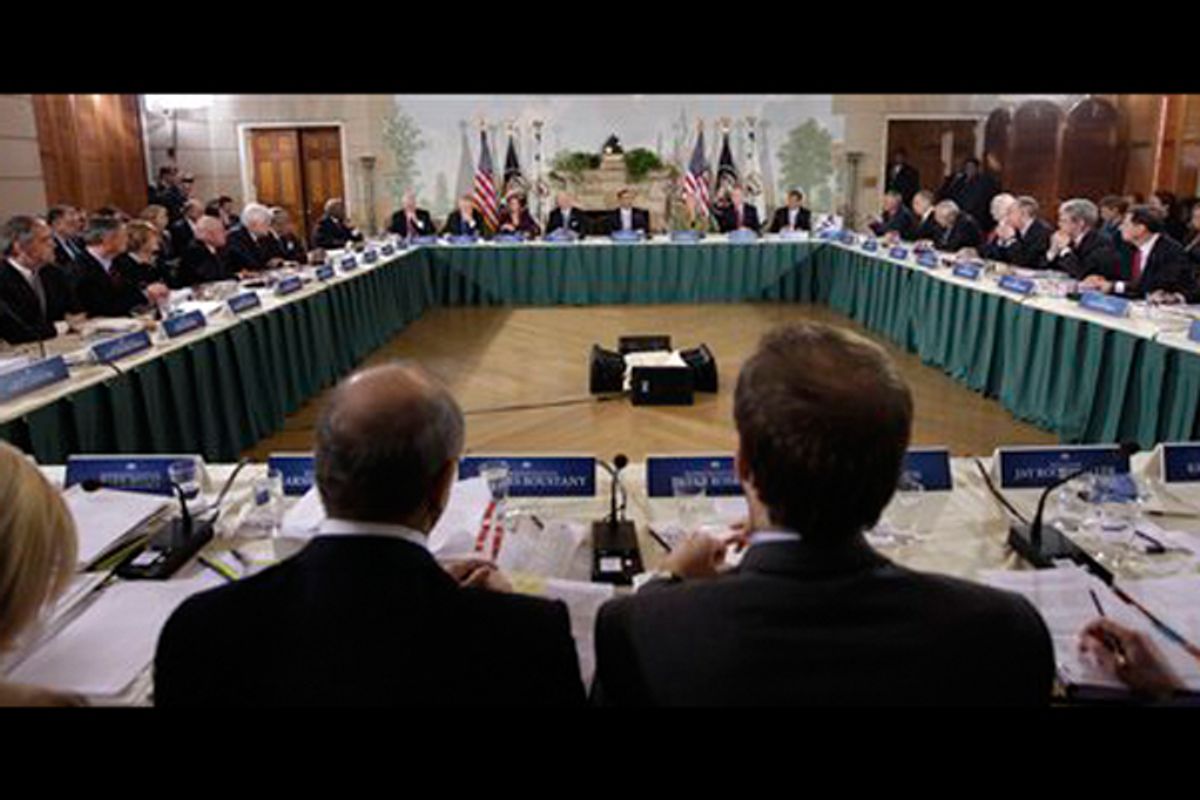 President Barack Obama, center, accompanied by Vice President Joe Biden, and others, is seen during their meeting for healthcare reform, as they met with Republican and Democratic leaders, Thursday, Feb. 25, 2010.
--

The White House has just released a letter that President Obama sent to Congressional leaders, following up on last week's bipartisan summit on healthcare reform.

In the letter, Obama sticks to the bipartisan message, focusing mainly on topics on which the two parties agree and talking about possibilities for more cooperation. It's unlikely any of this will bear any fruit, of course, but it's useful for White House messaging as Congressional Democrats prepare to go the reconciliation route.

The full, unedited text is below.

Thank you again for the time, energy, and preparation you invested in last Thursday's bipartisan meeting on health insurance reform. I have always believed that our legislative process works best when both sides can discuss our differences and common goals openly and honestly, and I'm very pleased that our meeting at Blair House offered the American people and their elected representatives a rare opportunity to explore different health reform proposals in extraordinary depth.

The meeting was a good opportunity to move past the usual rhetoric and sound-bites that have come to characterize this debate and identify areas on which we agree and disagree. And one point on which everyone expressed agreement was that the cost of health care is a large and growing problem that, left untended, threatens families, businesses and the solvency of our government itself.

I also left convinced that the Republican and Democratic approaches to health care have more in common than most people think.

For example, we agree on the need to reform our insurance markets. We agree on the idea of allowing small businesses and individuals who lack insurance to join together to increase their purchasing power so they can enjoy greater choices and lower prices. And we agree on the dire need to wring out waste, fraud and abuse and get control of skyrocketing health care costs.

But there were also important areas of disagreement. There was a fundamental disagreement about what role the oversight of the health insurance industry should play in reform. I believe we must insist on some common-sense rules of the road to hold insurance companies accountable for the decisions they make to raise premiums and deny coverage. I don't believe we can afford to leave life-and-death decisions about health care for America's families to the discretion of insurance company executives alone.

No matter how we move forward, there are at least four policy priorities identified by Republican Members at the meeting that I am exploring. I said throughout this process that I'd continue to draw on the best ideas from both parties, and I'm open to these proposals in that spirit:

There are provisions that were added to the legislation that shouldn't have been. That's why my proposal does not include the Medicare Advantage provision, mentioned by Senator McCain at the meeting, which provided transitional extra benefits for Florida and other states. My proposal eliminates those payments, gradually reducing Medicare Advantage payments across the country relative to fee-for service Medicare in an equitable fashion (page 8). My proposal rewards high-quality and high-performing plans.

In addition, my proposal eliminates the Nebraska FMAP provision, replacing it with additional federal financing to all states for the expansion of Medicaid.

Admittedly, there are areas on which Republicans and Democrats don't agree. While we all believe that reform must be built around our existing private health insurance system, I believe that we must hold the insurance industry to clear rules, so they can't arbitrarily raise rates or reduce or eliminate coverage. That must be a part of any serious reform to make it work for the many Americans who have insurance coverage today, as well as those who don't.

I also believe that piecemeal reform is not the best way to effectively reduce premiums, end the exclusion of people with pre-existing conditions or offer Americans the security of knowing that they will never lose coverage, even if they lose or change jobs.

My ideas have been informed by discussions with Republicans and Democrats, doctors and nurses, health care experts, and everyday Americans – not just last Thursday, but over the course of a yearlong dialogue. Both parties agree that the health care status quo is unsustainable. And both should agree that it's just not an option to walk away from the millions of American families and business owners counting on reform.

After decades of trying, we're closer than we've ever been to making health insurance reform a reality. I look forward to working with you to complete what would be a truly historic achievement.