I learned during my honeymoon that there was one quick way into my new family's heart: Tangy lemon pie 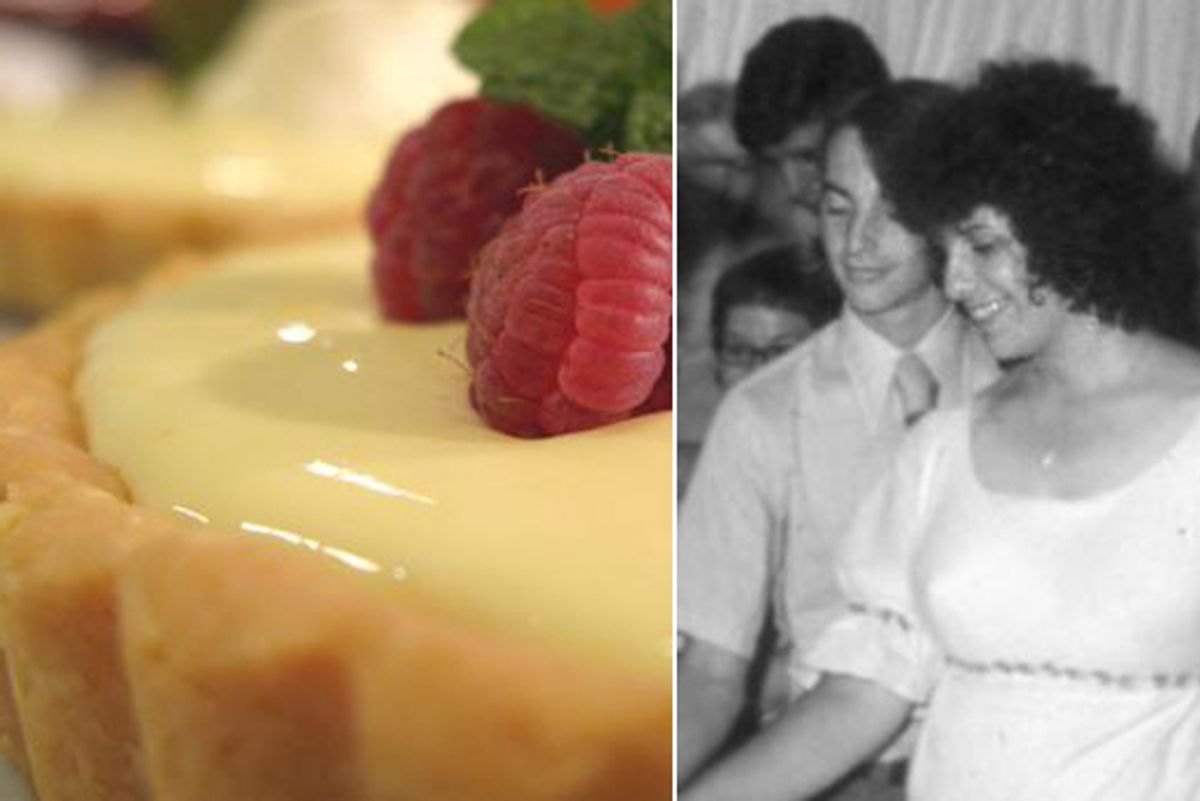 A version of this post first appeared on LuluandPhoebe's Open Salon blog.

After the wedding, when I was officially the 17-year-old bride and newly installed daughter-in-law, I learned the holy grail of in-law 101.

We were being driven by my father-in-law to the bus for our destination honeymoon: Rochester, N.Y. by Greyhound. Stopped at a red light, he turned to face us in the backseat of the old Volvo. In his most serious professor voice, he warned us to never forget my mother-in-law’s birthday and that he loves lemon pie. Long after the light turned green he continued to stare until we mutely nodded.

Little did I know that day, but retaining that in-law-101-trivia would land me in the favorites column for decades to come.

But at the moment, since I was a little bit scared of him, I thought it prudent to memorize the information. And the only way I could do that over the next 30 minutes, without anything to write with, was to make up rhymes in my head that went with birthday and lemons. Not an easy task at all, and certainly not something you should be thinking about on the way to your honeymoon, even if it is Rochester by Greyhound. When we got our tickets for the bus I asked for a pen and wrote it on my hand. At 17, that was my version of a daytimer.

Our little tiny honeymoon was uneventful and not one lemon made an appearance. We took the bus back to our hometown and no mention was ever made of that brief conversation. But I am happy to report that over the next few decades we have not missed one mother-in-law birthday. The lemon pie is a different story.

I had married into a family of lemon lovers. They apply lemon to anything that seems sensible to them. To me, it seems beyond reason that one would put lemon in, let’s say, vanilla frosting, but they do.

Fortunately, their fixation is almost always limited to lemons that are visibly baked in something. I consider that fair warning. But more times than I can count, there's been some mystery ingredient in dinner that ends up being produced from a lemon. It could be lemon peel in spaghetti sauce (um, wrong), or a splash of lemon in mayonnaise (not bad) or lemon slices under the bottom layer of chicken pot pie (not all that good) or my favorite, lemon wedges baked inside an apple (a very bad surprise). Thankfully, the lemon desserts are much more appealing, though relatively scarce.

My father-in-law loves lemon pie more than anything. My mother-in-law rarely makes lemon pie. But almost daily, he will ask if she made lemon pie for dessert. Frankly, if anyone asked me that on a regular basis I would probably learn how to put a bunch of lemons in a crust and hand it to them with a knife and fork. But that would just be me. My mother in law is much more kind.

She grew up in California farm country and they had lemon trees. I am guessing that the lemon harvest was generously supplying her family with bushels of the fruit annually. Apparently this lemon pie thing is genetic. Every member of the family seems to find more uses for lemon than is reasonable. And the son thinks lemon pie is just as heavenly as chocolate pie. And I still married him.

When Meyer lemons debuted at the market I actually began to pay attention. Somehow those little Meyer gems, sweeter than their tart cousins, made lemon creations worthy. It took a little bit of work, but there a few lemon desserts that make the effort worthwhile as a change from the chocolate moments. I cannot believe I said that aloud.

When they come to visit, I will sometimes make my father-in-law lemon pie-like things. And once in a while because it might be Meyer Lemon season at the market, I will indulge in a lemon tart.

The best lemon tart filling is adapted from Dorie Greenspan’s Baking Book. The crust is made with Fake Aunt Hope's rugelach dough. Something about the combination of cream cheese/butter dough with a lemon filling made with more butter not only sounds perfect, it is sublime. This is not the dessert to eat if you are thinking lemon light.