Macarons: The heir to the cupcake craze

It's small, colorful, crunchy, chewy, French, and it's about to take America by storm 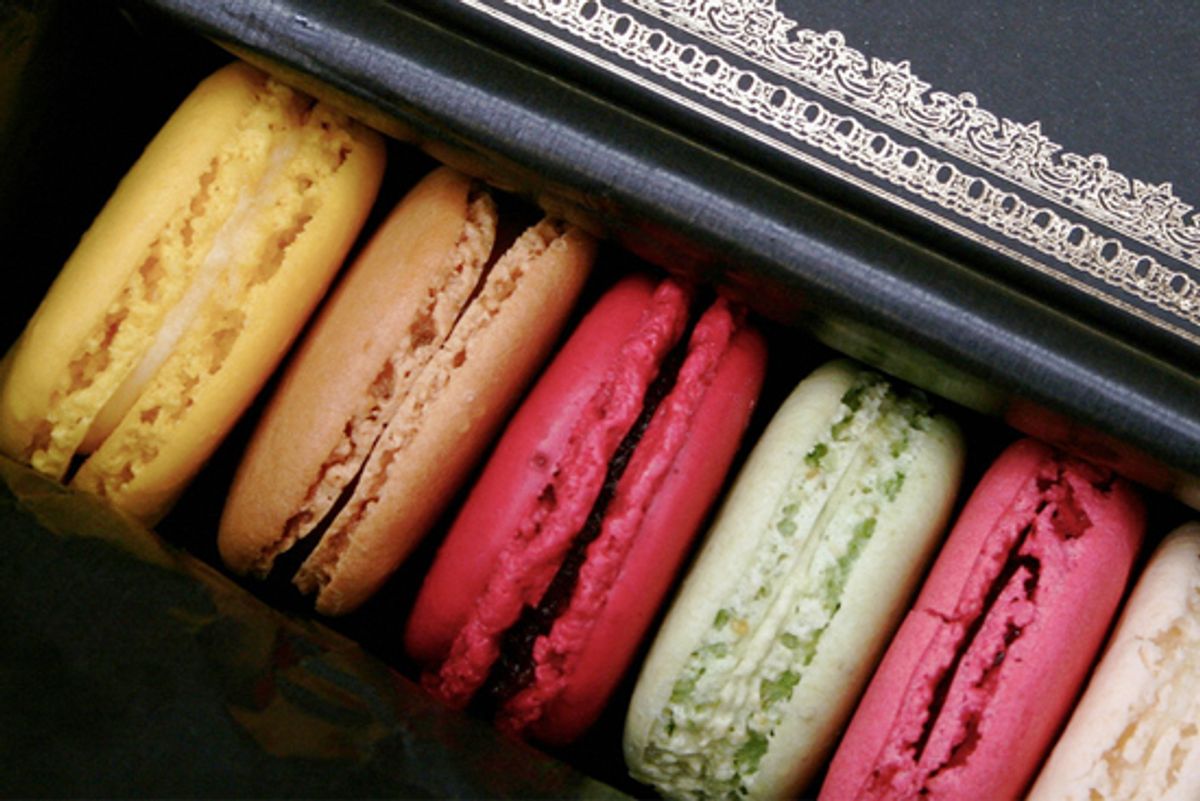 Only one "o" separates the sticky-sweet coconut balls called macaroons from macarons, but it's not the Passover treat that has Gossip Girls and American food fanatics buzzing. Macarons are traditionally high-end French confections that look like whoopie pies on acid -- incredibly saturated with color, their delicate outer shells are glossy and crunchy, with domed tops and flat bottoms (known as "the foot"). Basically crisp meringues of sweetened egg whites and almond flour, the cookies are sandwiched around a ganache, buttercream, or a fruit puree.

They come in a dozens of fruity, nutty and sweet flavors -- raspberry, lemon, pistachio, chocolate and caramel are common -- and even some highly unconventional ones: foie gras, white truffle, rose, violet. Macaron bakers pride themselves on fashioning distinctive colors and sometimes dustings of powders to distinguish their flavors, and their visual appeal is hard to deny. Check out these photographs to see the variety of their bright, saturated colors, which can look like an intense array of exotic fruits.

But it's the texture of the macaron that makes it truly unique. The crunch is subtle -- unlike, say, a potato chip -- and the fillings' moisture helps soften the interior of the meringue to a chewiness. When you bite into it, the shell cracks and dissolves on your tongue, you chew, the filling melts, and the flavors announce themselves.

The origins of the macaron aren’t entirely clear -- they may have been invented in Renaissance Italy monks -- and are believed to have been introduced to France by the pastry chefs of Catherine de Medici in the 16th century. But in any case, what is currently known as a macaron (with the crisp-chewy shell and soft filling) was invented by Pierre Defontaines in the 1930s.

For decades the only flavors of macaron were chocolate, vanilla, coffee and raspberry -- that is, until Pierre Herme, a French pastry wiz kid who apprenticed under famed patissier Gaston Lenotre at the tender age of 14, became the head patissier at Fauchon, the upscale Parisian patisserie, in the late 1980s. At Fauchon, he pioneered bold and new flavors -- like rose, olive oil and ketchup -- and in the '90s collaborated with Laduree -- France's best-known macaron-makers -- to expand their flavor repertoire. Released seasonally, like haute couture, new flavors get their own lines. (At Laduree, spring 2009 was Lily-of-the-Valley.)

Since then, France has witnessed a macaron explosion that has, in the last several years, gone international. The desserts have increasingly popped up in culinary and non-culinary magazines (like O), been prominently featured in Sofia Coppola’s "Marie Antoinette," became minor plot points on the CW's "Gossip Girl," and in high-end American restaurants, have become a popular mignardise (a post-dessert treat to enjoy with your coffee ... and to take the edge off getting the check).

The fact that macarons are extremely difficult to make well (something as subtle as the humidity in your kitchen can ruin them) and have a short window where they're best -- after the filling has softened the meringue, but before the cookie dries out -- means that they have always been a painstaking, small-batch product, and expensive. (If you understand French, or, erm, Quebecois, you can watch this helpful demonstration on how to make them.)

But as the Wall Street Journal pointed out this morning, the macaron is now getting a populist makeover. More and more coffee shops and grocery stores are selling versions of the treat on both sides of the Atlantic. Laduree recently opened a stall in London's Harrod's department store, and since 2007, French McDonald's have been selling them cheaply at McCafes, their in-restaurant cafes (the macarons are sent to the restaurants frozen) -- a fact that has many purists disappointed that they're not made or treated with the care that makes them special. In the U.S., Whole Foods, Trader Joe’s and even Starbucks have begun offering packaged versions of the macarons.

But, even in their diminished form, the macaron is likely headed for a popular explosion. As YumSugar’s Susannah Chen point out in the Wall Street Journal, it has the makings of the next cupcake craze: "They come in different colors and flavors, and they're indulgent, but they won't wreck your calorie count for the day."

Clearly, history is on the macarons' side -- and if confectioners can figure out how to do them right on a big scale, it’s only a matter of time before America is completely invaded by their rainbow of sweet and crunchy deliciousness.