I'm pregnant, I'm fat and I hate it

Are women under too much pressure to shed their excess baby weight? I sure wasn't, and I'm paying for it now 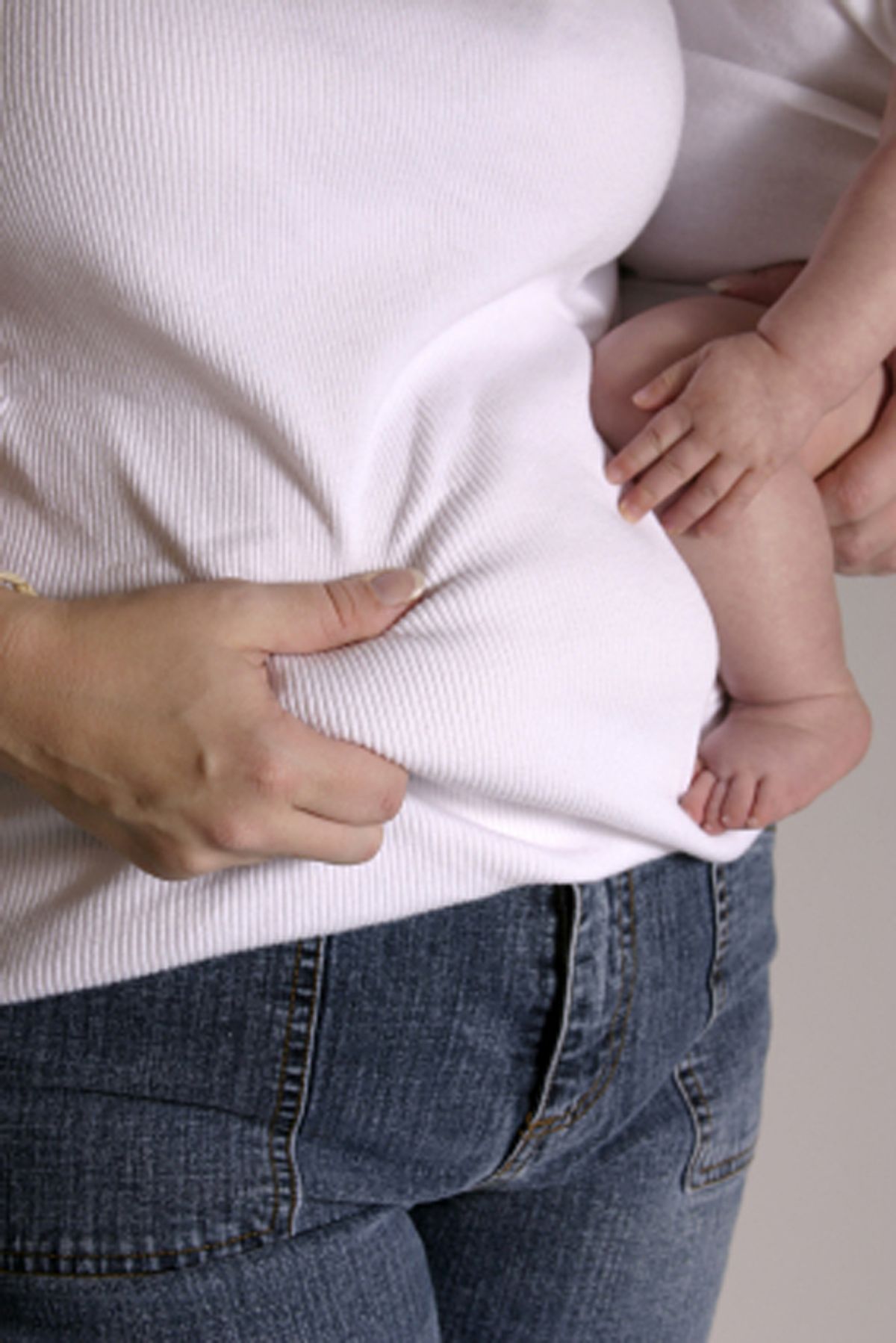 About six months after my son was born, I was picking up some dry cleaning, and the woman behind the counter smiled at me sweetly as she handed over the bag of shirts. "So," she said, "when are you due?"

The woman looked confused, then mortified. I did my best to act like it was no big deal. Then I got in my car and cried, vowing to go on a diet and find a new dry cleaner. The truth, though, was that I really couldn't blame the woman. Like many other new moms, I was fat; not obese, not fat in the gastric-bypass, reality show spectacle way, but a solid, undeniable, 15 to 20 pounds over the range that is considered healthy for my height.

I'd spent the majority of my pre-pregnancy years bouncing around in the top third of this range, always a little heavier than I might have liked, never the sort of girl who would ride a bike in a bikini or ask a salesgirl why the stores carried so darn few size zeros, but a solid, healthy woman with a healthy Body Mass Index. Suddenly, with a 6-month-old and a lot less time on my hands for working out, I was firmly outside of this zone and not only at increased risk for diabetes, heart disease, high blood pressure, but -- more immediately distressing -- fits of despair in front of three-way dressing room mirrors, emotional breakdowns brought on by the bridesmaid dress I wore for a friend's wedding, a red strapless number in which I resembled a ripe maraschino cherry. Through all this, I could make joking reference to my "empty pouch" or my "leftover maternal reserves," but when I stepped on the scale, I knew the truth. Pregnancy had pushed me over that threshold so many women fear crossing. I was no longer curvy, no longer a stubborn but reliable size 10. I was fat, and I wasn't alone.

Despite the fantasies of celebrity magazines, in which bone-thin women drop baby weight before they've changed a diaper, for the average-size American woman -- that is, a size 14 -- pregnancy is a gateway to years of elastic waist bands. It's not hard to see how this happens: When you've given up caffeine and alcohol, when you have to struggle to tie your shoes or roll over in bed, chips and Häagen-Dazs are no small comfort. A friend confided in me about the last few miserable weeks of her trimester: "I was drinking a chocolate milkshake every freaking day. I was shameless." Problem is, however easy it is to pack on the pounds, it can be really, really hard to get them off.

In decades past, the dominant way of thinking was to acknowledge this reality and fight against it tooth and nail. But lately, against the backdrop of eerily vanishing celebrity baby bumps, a kinder, gentler approach is on the rise. Forget fitting back into your skinny jeans a few weeks postpartum. Love your post-baby body. Embrace the extra "you." Katie Gentile writes in the Daily Beast that, "When women shed the baby weight, they are not merely getting back their pre-baby bodies, they are obliterating all evidence of ever having had a baby in the first place … The post-baby body is wrung of its recent life-giving feat." In a Jezebel item, Sadie Stein admonishes the new "baby weight craze. She quotes a commenter on UrbanBaby who tells women to "think about all your body's been through and don't be so hard on yourself."

There's even a book devoted to this anti-Hollywood, anti-dieting perspective, a feel-good meditation on baby weight -- "Does This Baby Make Me Look Fat: The Essential Guide to Loving Your Body Before and After Baby." Its authors plead with new moms not to be too hard on themselves for having a little postpartum flab, encouraging women to love their bodies, to eat healthy and to embrace their roundness. All of this is part of an understandable pushback to the beauty-industrial complex, which creates impossible standards for women made worse through airbrushing and Photoshopping. But the big, fat truth is that most mothers aren't going too far to shed their excess baby weight. We're not going far enough. Sixty-two percent of American women are overweight, and so for the majority of American women, excess, lingering baby-weight is a real problem: health-wise, self-esteem-wise, and otherwise. There's a reason women are buying those "baby weight craze" tabloids; because in a world of stubborn belly fat and clinging cellulite, that fantasy is powerful.

If I'd heard someone making this argument four years ago, I probably would have rolled my eyes. What's changed between then and now is a 2-year-old (mine), two pregnancies (I'm currently in my third trimester for No. 2), and 15 pounds of excess weight that have made my second pregnancy a lot more uncomfortable than my first.

I take full responsibility for this predicament. I have a profound and unshakable love of good eating. A slice of perfectly buttered, warm-from-the-oven bread has been known to bring tears to my eyes. I don't know that I want to live in a world without cheese. I adore cooking and baking and holiday feasts and dining with friends and spending too much money on mind-blowing meals in wonderful restaurants, but mostly, and quite simply, I love food. Before my pregnancy, I stayed healthy (never skinny) by exercising regularly, eating tons of fruits and vegetables all summer and not getting too down on myself if I plumped up a little, hibernation-style, in the winter. It was a delicate equilibrium that took years to achieve and only a few months to unravel, specifically the first few months of my pregnancy, a dark, cold winter in Chicago when, elated by the knowledge that I was nurturing a little life and relieved by the fact that I could keep nausea at bay with the continuous ingestion of egg bagels, plain pasta, white rice, baked potatoes and every other starchy goodness known to woman, I dispensed with moderation.

For the first time in my life, I felt light and free, even as my thighs and hips grew heavy. I did things I never would have done sans fetus. I "treated" myself to drive-through junior bacon cheeseburgers on my way home from the gym. Guacamole-laden tortilla chips replaced seasonal salad as my first course of choice. I bought a maternity tee with the words, "We're hungry," printed across the belly. I didn't stop exercising, but it seemed like the more I exercised, the more I ate. In 39 1/2 weeks of pregnancy, I gained 39 1/2 pounds, and then delivered, to my astonishment, a little peanut, a 6-pound, 10-ounce baby boy. When I came home from the hospital, I hardly recognized myself. It took me about a year to lose the first 25. I was still working on the last 15 when No. 2 made an appearance on the sonogram screen.

It's because of women like me, or women in far worse health predicaments -- women entering pregnancies with a lot more than 15 excess pounds -- that many healthcare providers are beginning to focus more on nutritional counseling programs as an integral part of prenatal care. The medical director of one such program at Northwestern University, Alan Peaceman, explains that in addition to the risks of gestational diabetes, preeclampsia, and cesarean sections, new research suggests that "women who gain excessively during pregnancy may be putting their children at risk for obesity. So they're not doing this to fit back into their jeans six weeks after pregnancy. They're doing this for the health of their babies."

When I asked Peaceman if he worries some women might take the message too far, falling prey to the body-hating, "pregorexic" mentality, he laughs: "That's just not the major issue that affects the population in this country. The much bigger problem is the women who gain too much and then can't lose it. A lot of women who've fought weight issues their whole life look to pregnancy as a time when the rules are off, when they don't have to engage in the struggle. We need to get the word out that this is not the case."

The program is intended for women with a pre-pregnancy BMI over 30, which means I'm not quite fat enough to join in. Nonetheless, it inspired me. I wouldn't say I've been on a diet during this pregnancy, but I haven't been throwing caution to the wind, either. Unlike last time, the woman at the fast-food drive-through doesn't know me by name. And unlike last time, when after the birth of my son I put off diet and exercise for as long as possible, I plan to be working off the weight this time as soon as my doctor gives the green light. Look, any woman who's given birth and nursed a child knows there's no fighting physiology at least in some respects. But I want to recognize myself in pictures. I want to feel sexy again in a short skirt. I don't want an entire lot of pre-baby clothes to languish in the back of my closet for the next 20 years until I pass them along to some smug, skinny niece who loves their "vintage" look. I could say that I'm doing it for my health, and this would be partially true. But frankly, I'm doing it because however short my pre-pregnancy body might have fallen from the celebrity ideal, it was mine, and even with two babies in tow, I want it back.