My love-hate relationship with Meryl Streep

She's predictably mannered and fussy. She can also be pretty great 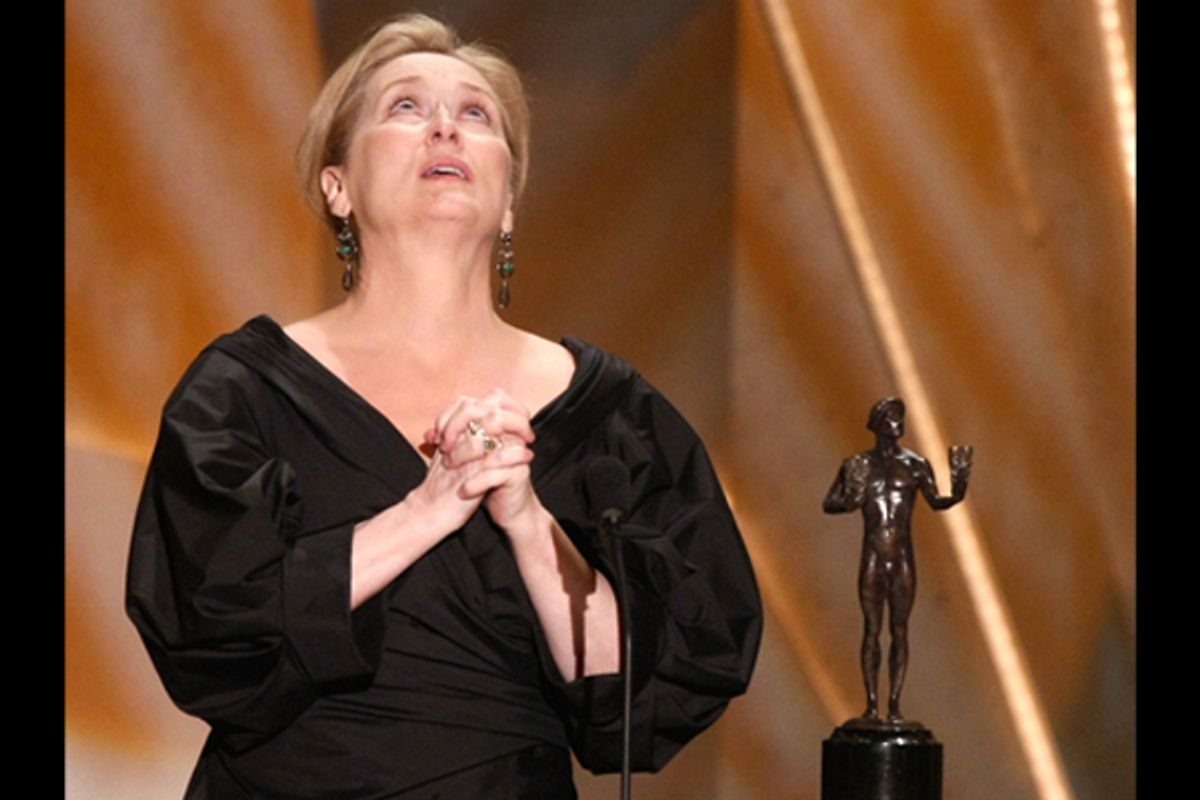 Actress Meryl Streep accepts the Female Actor in a Leading Role award for "Doubt" during the 15th Annual Screen Actors Guild Awards held at the Shrine Auditorium on January 25, 2009 in Los Angeles, California.
--

I don't think it's possible, or even desirable, for moviegoers -- and that includes critics -- to be objective about actors. One of the deepest and most abiding pleasures of moviegoing is responding to performers, and so it makes sense that we often have intense and conflicted personal responses to them. That's what troubles me about the lockstep view of Meryl Streep as the consummate actor's actor, a performer who deserves our lifelong adulation simply because she works so hard at mastering accents. There is no religious tablet -- as far as I know -- that decrees we all need to be in constant awe of Meryl Streep. She can be as dull or as mannered as any other actor currently working, whether she's playing a frayed-at-the-edges modern do-gooder in "The Hours" or a bitchy, power-mad nun from the Order of the Sunbonnets in "Doubt." The former was a performance shaped around a big breakdown moment, the kind of show that's designed to make people say, "Brava!" but doesn't necessarily cut deeply; the latter was a triumph of primly pursed lips and glowering eyes, the kind of turn that makes admirers throw around words like "discipline" and "restraint" -- though when I look at a performance, the last thing I want to be noticing is the discipline.

But if, too much of the time, I find Streep predictably mannered and actressy, there are also times when I fully succumb to adoring her, when all my conflicted and annoyed feelings about her are temporarily erased. I felt that way about her performance, as one-half of a sister-sister singing duo (opposite Lily Tomlin), in Robert Altman's final film, "A Prairie Home Companion." And I feel that way about her rendering of Julia Child in Nora Ephron's "Julie & Julia," which is my favorite of the Oscar-nominated actresses' performances this year.

It's easy to think you know a person when you've seen her often on TV, particularly if it's someone you grew up watching. In "Julie & Julia," Streep builds on that familiarity: In some ways I think her performance riffs on the idea that we don't know the real Julia Child, even if we think we do. Streep creates her version of Julia Child from a magpie's collection of bits and bobs: She captures Child's trilling vocal mannerisms and her habit of resting her hands on her hips like a jolly fishwife, which are so familiar from Child's TV appearances over the years. She captures Child's easygoing affection for her husband, Paul (here played, beautifully, by Stanley Tucci, who was clearly nominated this year for the wrong role), in a manner that mirrors the way Child herself wrote about their marriage in her wonderful posthumously published 2006 memoir, "My Life in France." And, most thrilling of all, she slips right into the embrace of Child's big-gal sense of humor. When Streep re-creates the famous broadcast in which Child nearly flipped an omelet right out of the pan, she pauses awkwardly at the wonder of her own clumsiness, and then goes on to explain the mishap with the sensible approach of a good-natured scientist: In that split-second when the omelet is supposed to take momentary flight, she just didn't have the courage of her convictions. But, she assures her audience, such a mishap is hardly the end of the world: "You can just sort of -- put it together," she says, nudging some stray bits of broken omelet back into the pan. Child gave her audience permission to be imperfect, a quality Streep channels beautifully.

In my review of "Julie & Julia," I wrote, "Streep isn't playing Julia Child here, but something both more elusive and more truthful -- she's playing our idea of Julia Child." And in some ways, it may be harder to play the idea than the person. That's partly because Child is so easy to impersonate. (Exhibit A is Dan Ackroyd's "SNL" "Save the liver!" skit.) But Streep goes beyond impersonation into a realm of pure affection and openheartedness. I don't think you can successfully play Julia Child -- and you certainly can't play the idea of Julia Child -- just by learning a specific accent or physical mannerism. Streep gives shape and dimension to that abstract quality we call joy. When she tucks into a piece of fish sautéed in butter, the smile that lights up her face is one of pure, sensuous pleasure; when she proves, after much practice, that she can chop an onion faster and more meticulously than her snooty male cooking-school compatriots, she radiates pride along with just a touch of understandably human "I showed you guys, didn't I?" self-satisfaction.

Streep also has a great deal of fun with the role's physicality. Child was a tall, strapping woman who, in the late '40s, found herself living with her new husband in France, the land of tiny girls in ballet slippers. In showing that contrast, Streep is helped along here by clever production design: At one point Child stretches out on a French bed, her big American feet dangling off the end. But Streep also makes Child's stature a metaphor for her outsize capacity for delight. Her Julia strides through Paris with a sense of wonder: Being a giantess, as well as a gleeful and enthusiastic mangler of Français, makes her an outsider. But it also gives her license to explore and discover, to appreciate aloud things that blasé Parisians might take for granted, and she does so without hesitating or second-guessing. Streep's performance in "Julie & Julia" is among the best she's ever given, a turn so flirtatious and light that some might be tempted to dismiss it as being less than serious. But Streep -- who is wonderful, and underrated, as a comic actress -- may be at her best when she's freed from the constraints of proving how serious and worthy she is. She doesn't earn our love and admiration in "Julie & Julia." She instead shapes a character we find ourselves falling in love with, just as Julia herself found the second love of her life -- after Paul -- in the nation and the food of France.