If we really stopped segregating the Academy Awards by sex, who would win? We asked film experts to vote 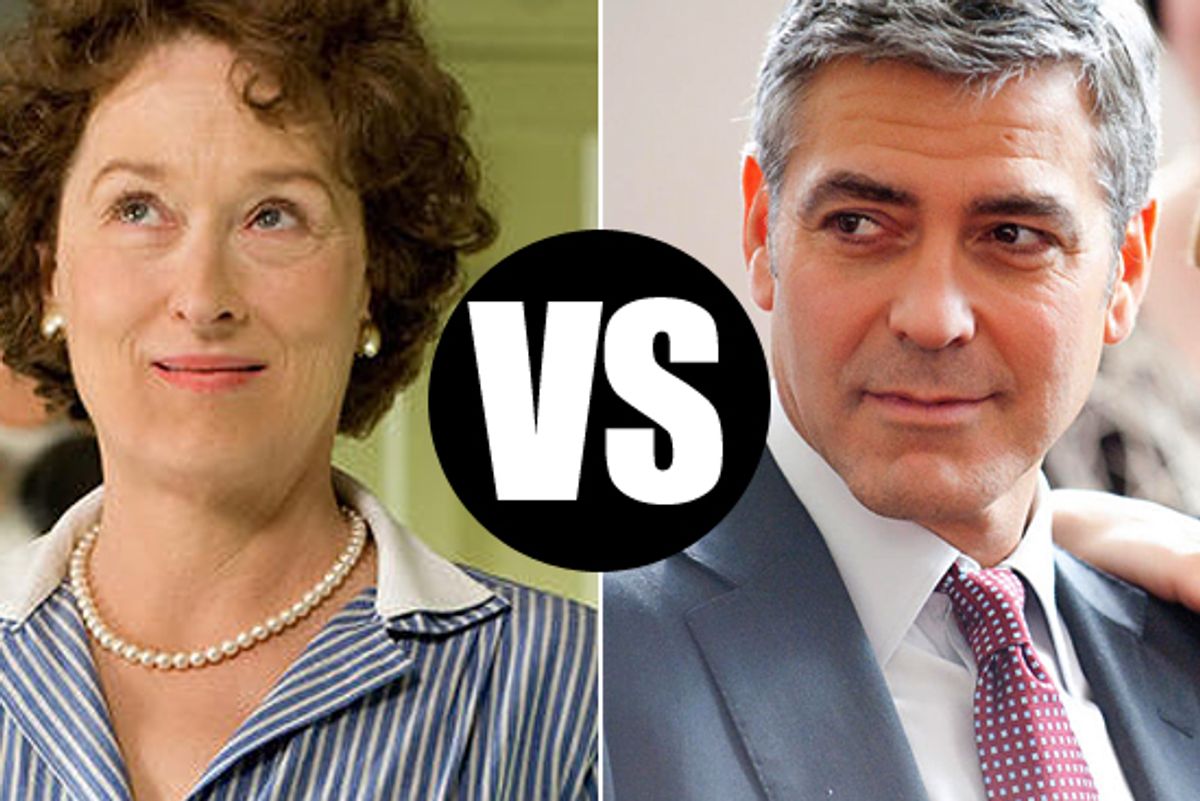 There's no separate Academy Award for best directress or best male cinematographer. Why, then, does the academy divide its acting along gender lines? In today's New York Times, Kim Elsesser makes the provocative argument to fold best actor and best actress categories into one. And she's not alone: NPR film critic Bob Mondello called for an end to sex-segregated ballots two weeks ago, reasoning that combining the categories would "eliminate two acceptance speeches and strike a blow against sexism in one fell swoop." Besides, Mondello said, the Oscar will likely go to Mo'Nique Sunday night, "and that would be no less true if she were competing with the boys."

But would she? It's a tantalizing face-off: George Clooney vs. Meryl Streep, Christoph Waltz vs. Anna Kendrick. Salon asked film critics and notable film buffs what they thought of such an awards twist, and whom they'd pick in a mixed-gender Oscar race.

Molly Haskell , film critic and author of "Frankly, My Dear: Gone With the Wind Revisited":

I hope the academy has the sense to ignore this suggestion. It's hard enough settling on a winner when you're comparing actors among their own sex; to go beyond that simply widens the field hopelessly, opens up an apples-and-oranges multitude of standards for comparison. Separating actors by gender may not be as "essential" as it is for athletes, but it's a highly useful way of organizing wildly idiosyncratic and dissimilar talents into categories of competition.

I'd actually pick an actor not nominated (Matt Damon from "The Informant!"). If I have to choose from those nominated, I'll go with Helen Mirren in "The Last Station" and Woody Harrelson in "The Messenger." But this is too painful.

I think Jeff Bridges and Christoph Waltz. Granted, on a superficial level, these are performances entirely defined by the masculinity of the actors -- just as Mo'Nique's performance is defined by her expression of feminine fragility. But they are simultaneously free of gender boundaries because the roles are so closely related to the power of the performers, rather than the fact that they happen to be men.

I'm not saying that the Jew Hunter could've been played by a woman, but Waltz's unique combination of creepiness and comedic timing has nothing to do with his gender. And I would say the same thing applies to Daniels, with his sad eyes and grumpy expressions throughout "Crazy Heart."

Vadim Rizov, contributor to Sight and Sound and the Village Voice:

I'm sure Jeff Bridges is magnificent, but he always is, so I'm not opposed to giving him a de facto lifetime achievement award. Out of what's left, I guess I'd go with George Clooney ("Up in the Air"), whom people keep underestimating as just a facile charmer.

For supporting, Anna Kendrick ("Up in the Air") in a walk. Christoph Waltz is indeed very cool, but it's kind of hard to judge what he's doing, because essentially his ability to speak multiple languages flawlessly is blowing everyone away. To me he's not necessarily the most memorable part of the film. Mo'Nique is being given a lot of credit for not sucking, but her performance is textbook Oscar bait in a terrible movie; if not for her background, she'd be getting called out on it right now. What I really like about Kendrick is that she's an instinctual comedian who, I suspect, is basically a dramatic actress at heart; her timing and poise are remarkable. And I'd date her in a heartbeat given the chance.

No matter what the genderification, I would pick Jeff Bridges for best actor/ess. Not, of course, for his rote performance in "Crazy Heart," but for his performance in "The Fisher King" and "Cutter's Way." There is no statute of limitations on art, nor awarding same.

For supporting actor/ess, attention must be paid to Christoph Waltz for the coveted best Nazi in a movie slot. Previous winners of the coveted Golden Swastika include Conrad Veidt ("Casablanca:), Sig Ruman ("To Be or Not to Be"), Otto Preminger ("Stalag 17") and, of course, Erich Von Stroheim ("Five Graves To Cairo").

It's an interesting thought experiment -- especially this year, when I have overwhelming favorites in all four categories: Waltz and Mo'Nique (like everyone else who went to a movie last year) in the supporting categories; Streep and Firth in the leads.

So, Waltz vs. Mo'Nique? Not a painless call, but I give it to Waltz for the surprise and variety of the performance: the charm, the menace, the wit, the remarkable shifts between understated and over-the-top.

Streep and Firth are a tougher call, because the performances are revelatory in such different ways. Firth imbues an underwritten role with extraordinary depth, balancing pathos and magnetism with such quiet elegance. But -- and this one does hurt -- I think I'd go with Streep, for the wittiest, most appealing performance of her storied career. There are two ways an actor can go when playing a modern figure with well-known mannerisms. The easy one is to mimic the surface, à la Cate Blanchett's wildly overpraised Katharine Hepburn impersonation in "The Aviator," which merely reflected back at us the celebrity we already knew. The harder way is to ignore the surface and work from the inside out, as Christopher Plummer did in his comparably underpraised turn as Mike Wallace in "The Insider." In "Julie & Julia," Streep somehow manages to do both at once, capturing the goofy, oversize Julia Child idiosyncrasies familiar to anyone who had a television in the 1970s, while also enriching and humanizing that distant but uniquely familiar figure

My two favorite performances happened to be so incredibly wrapped up in gender identity -- Carey Mulligan in "An Education" and Jeremy Renner in "The Hurt Locker." You can't just play a character -- you're playing a man or woman. If there were a great gender-neutral performance, though, I'd give it to Sharlto Copley for "District 9," as an office drudge dragged into an incredibly complex and deeply human family drama. He was fierce, protective and heartbreaking, in a role that I think would have been equally effective with a strong male or female. But if I had to choose nominated people from the two categories? Carey Mulligan for lead and Woody Harrelson for supporting.

Mo'Nique for best supporting performer, because she transcended what a lot of people expected. For best performance, I pick Jeremy Renner. What he did in that part is extraordinary.

But the academy would never go for the gender-neutral Oscar. One of the most interesting parts of the evening is getting to see so many different people wearing so many different clothes. You wouldn't see the beautiful dresses. Imagine! Heads would explode in Hollywood if there were fewer women and men to dress, fewer women to see. It's an economic issue. Plus, when you decrease opportunities, you decrease opportunities for women. I'm not going to fool myself into thinking women would still get the same proportion of nominations if they eliminated the best actress category.

I really think that it's Jeff Bridges' year to get one of those best actor statues for an entire outstanding career. But all bets would be off if he had to face Gabourey Sidibe of "Precious." Bridges can take Clooney easy. Hell, he can even take Carey Mulligan of "An Education" without breaking a sweat. Everyone voting will know that they'll probably have many more chances to award Mulligan with a statue over the next decade or two. But when it comes down to Bridges against Sidibe, I have to lean slightly toward the latter.

As for the supporting actor category, Mo'Nique lays waste to them all. Maybe Woody Harrelson's performance in "The Messenger" stacks up against hers in "Precious," but the Academy voters have mostly forgotten about that movie. Christoph Waltz seems to be a critics' choice in the male actor category for actually finding a new way to play a coldblooded Nazi in "Inglourious Basterds," but when up against Mo'Nique, she'd just smack his Waffen SS ass with a frying pan.

Given the crop of actual nominees -- it's still a tough call -- my choice for best performer would be Colin Firth for his exemplary craftsmanship. I thought "A Single Man" was flawed on a few important levels, and one of them was that it would be nothing without him. Such subtlety and finesse, such awareness -- not just of a given scene's exact intentions but also of the camera's proximity. He has a great touch. My choice for best supporting performer would be Mo'Nique for her clarity and total commitment. Yes, there's bravery there, for inhabiting such a repulsive person, but it seems condescending to congratulate her for that. It's more than brave. It's the scale of the life that she brings to the part, a Shakespearean grandeur.