A wave of phony indignation over Charlie Rangel 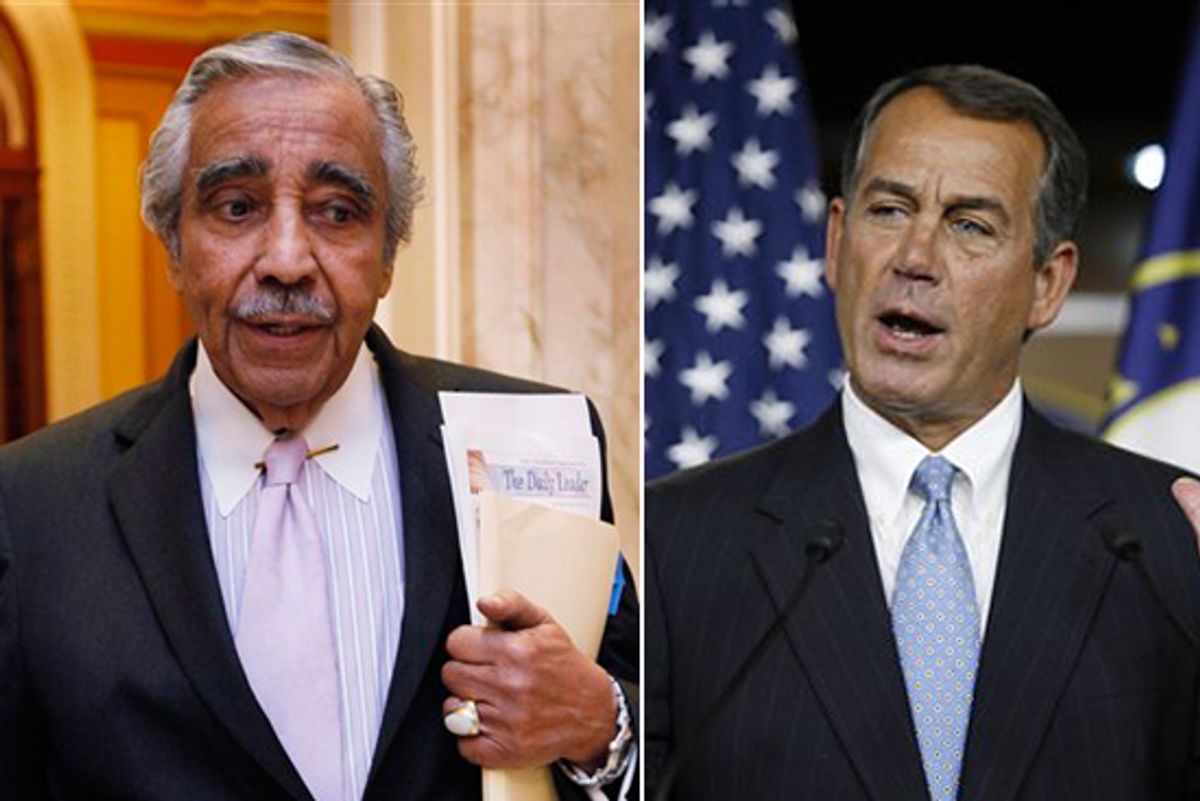 Now that Charlie Rangel has relinquished his coveted chairmanship of the House Ways and Means Committee and may be facing worse days ahead, his humiliation stands as a mark of ethical consistency for liberals and Democrats. A Korean War hero and a symbol of African-American advancement, the likeable Harlem pol was brought to book not by the Republicans who are celebrating, but chiefly by the "liberal" New York Times and the Democrats on the House Ethics Committee who voted to reprimand him.

The Times originally investigated Rangel’s finances and fundraising and then published the stories that triggered the official ethics probe. The ethics committee, reorganized by Speaker Nancy Pelosi in 2007, ultimately did not shrink from admonishing one of the most powerful and senior Democrats in the House, and continues to examine other allegations against him. Citizens for Responsibility and Ethics in Washington -- a watchdog group funded by Democratic donors -- twice named Rangel to its annual list of “most corrupt” members of Congress (which is always admirably bipartisan, unlike such lists maintained by CREW's conservative counterparts).

Yet as the Republicans and their media epigones celebrate Rangel’s downfall, the contrast with their own typical tolerance of corruption in their own ranks is instructive. To draw political comparisons between the cases of Rangel and Tom DeLay, as some mainstream pundits and conservative commentators do, is glib and fatuous if not simply dishonest.

Keep in mind that none of the GOP pet media outlets, such as the Washington Times, the Weekly Standard or Fox News Channel, has ever initiated an ethics investigation of a Republican in the House leadership. Instead, these outfits habitually devote their efforts to protecting Republicans, no matter how crooked. Indeed, they tend to accuse the Times of “liberal bias” whenever the paper criticizes or investigates a Republican.

Five years ago, when DeLay came under intense pressure from prosecutors, the press and watchdog groups, the National Review urged conservatives to rally around him in an editorial, noting dismissively that “many of the offenses DeLay is being accused of—taking foreign trips funded by outside groups, attending events with lobbyists—are committed by every congressman on Capitol Hill.” Of course taking a foreign trip funded by an outside group (with corporate support) is precisely the transgression for which the ethics committee admonished Rangel.

But the same National Review editorial suggested that official rebukes by the ethics committee are unimportant anyway, at least when directed at a Republican leader: “The [ethics] committee did warn DeLay to be more careful, the ‘admonishment’ that has played in the media as an official sanction, which it wasn't.” In short, they didn’t believe an admonishment by the ethics committee was enough to get rid of DeLay, but it is reason enough to throw out Rangel -- and vote against the Democrats who pushed him out, just because they’re members of the same party.

During the decade or so when the Republicans controlled the House, their stewardship of the ethics committee – and their handling of ethical issues – was deplorably weak. In those days, they didn’t believe DeLay should be removed from leadership because of those wimpy admonishments. Indeed, they didn’t believe that he should have to step down  even if indicted for a felony! That was the permissive viewpoint of the great majority of the House Republican caucus in November 2004, when they voted (just after the presidential election) to change the rules so that DeLay’s expected indictment would not automatically oust him. They held that vote in strict caucus secrecy – and a few months later restored the old rule when public outrage became overwhelming.

Reluctant to punish DeLay for his multiple transgressions and abuses, the House Republican leadership instead eagerly rapped the handful of Republicans on the ethics committee who had admonished him. Here the contrast between the Democrats and the Republicans is striking. Speaker Pelosi may have wished her friend Rangel could somehow escape the consequences of his actions, but she did nothing to hinder or intimidate the ethics committee.

The Republicans  purged their own members from the ethics committee -- and its chairman, Rep. Joel Hefley, R-Colo. -- for the sin of joining committee Democrats in unanimously admonishing DeLay. Replacing them were three more pliable members, who had publicly admitted voting to change the indictment rule. One of those three DeLay stooges was none other than Rep. Tom Cole, who now serves as deputy whip under Minority Leader John Boehner .

When did the Republicans start to worry so much about ethical purity? Rep. Doc Hastings, R-Wash., who replaced Hefley as ethics chairman, was notable only for stalling probes into the truly repugnant misconduct of Mark Foley, R-Fla., Randy Duke Cunningham, R-Calif., and Bob Ney, R-Ohio, as well as his sponsor DeLay. Foley narrowly escaped criminal indictment, while the other two went to prison (where Cunningham will remain for the rest of his life).

The rule that Rangel violated when he took those now-infamous Caribbean trips was instituted by the Democratic majority as part of its ethics reorganization. This was a rules change that Boehner vocally opposed -- and it is a rule that Boehner would have violated more than once had it been in effect a year or two earlier. Back in July 2006, the New York Times reported on one of Boehner’s many subsidized vacations:

"Mr. Boehner flew to a golf resort in Boca Raton, Fla., in March for a convention of commodities traders, who have contributed more than $100,000 to his campaigns and are lobbying against a proposed federal tax on futures transactions. During the trip, Mr. Boehner assured his hosts that Congress would most likely not approve a tax they opposed. His leadership committee, the Freedom Project, which in recent months has enlisted the use of corporate planes from Federal Express, Aflac and the Florida Power and Light Company, later reimbursed the Chicago Mercantile Exchange for the cost of the Boca Raton trip."

Naturally Boehner’s leadership PAC is funded heavily by corporate interests – so he was “reimbursing” one corporation with money donated to him by others. Boehner has always been known as an obsequious servant of business lobbyists, dating back to the moment in 1995 when he was observed handing out checks from the Brown & Williamson tobacco company political action committee on the House floor. (Confronted by a few naive GOP freshmen, he conceded that such brazen grifting “didn’t look good” and was sorry that he had been caught.)

At this point it is clear that Rangel is guilty of hubris and sloppiness, and perhaps worse. It isn’t easy to understand why he should be branded irredeemably “corrupt,” however, while someone like Boehner is considered an honorable public servant. The notion that he and his cronies would restore ethical standards if they regain the majority must be a joke.