Who says the GOP doesn't have any ideas: The party's quest to name everything after the 40th president rolls on 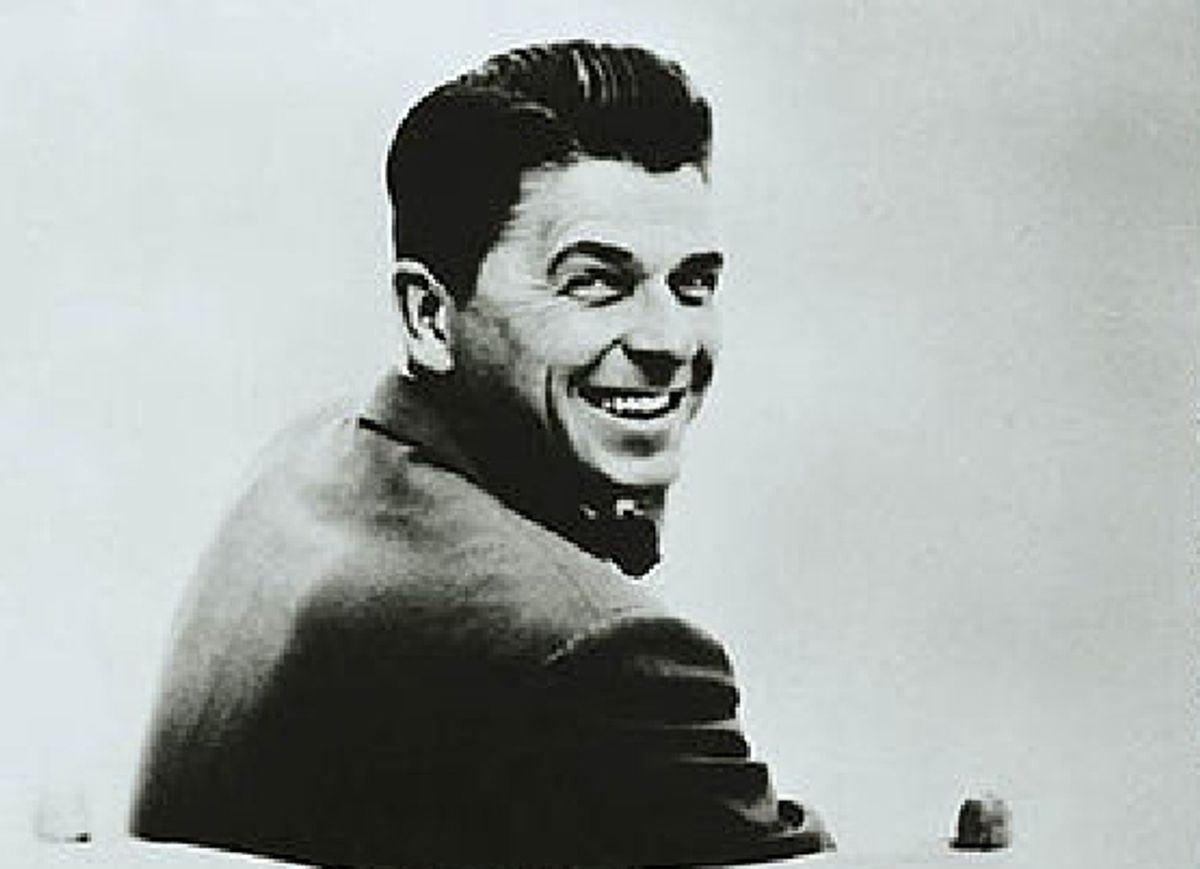 Ronald Reagan, back when he was host of "General Electric Theater."
--

The GOP needs an icon and, ever since his popularity crashed to unrecoverable depths in his second term, George W. Bush hasn't been available. Not that the right will admit that they ever saw W. as an icon: When his numbers went south, conservatives rushed to proclaim that he'd never really been one of them.

Which explains the right's elevation of Saint Ronald Reagan of Simi Valley in the middle of last decade. Lacking a present they could stand proudly behind -- even though they were ostensibly in power -- conservatives invented a glorious past.

This is no news to anyone who’s heard a Republican speak in the past, say, four years. And now, with the party newly emboldened by President Obama's struggles, the effort to canonize Reagan is still on its agenda. Hence the news that Rep. Patrick McHenry, R-N.C., has introduced a bill  to swap out Ulysses S. Grant's face on the $50 bill for the Gipper's.

"Every generation needs its own heroes," McHenry explains. "President Reagan is indisputably one of the most transformative presidents of the 20th century. Like President Roosevelt on the dime and President Kennedy on the half dollar, President Reagan deserves a place of honor on our nation's currency."

This move is undoubtedly bound for popularity among Republicans, if the party's history of symbolic offerings to Reagan is any evidence. McHenry's bill follows in a tradition of renaming stuff for Reagan that includes a huge federal building, a major airport, and a highway. There are also ongoing efforts to rename mountains in California and Nevada in honor of his upcoming 100th birthday.

Now, McHenry was five years old when Reagan was elected. Perhaps we can forgive him for a certain lack of familiarity with the history of the period. But the party as a whole would do well to remember some of the ambivalence it once had about the former president. Through much of his two terms in office, Reagan was mistrusted, and even occasionally detested, by those to his right. He sought conciliation and détente with the Soviet Union -- a move reinterpreted in retrospect as a balls-of-steel confrontation with the Evil Empire. He was willing to compromise with Democrats to make social security work. Dark suggestions circulated that he was under the spell of his chief of staff, Jim Baker, a classic pragmatic Washington wise man. By 1983, some on the right were saying that he shouldn't seek reelection, or should face a primary challenge if he did.

And so long as we’re trying to remember history here, it doesn’t look great for the GOP to be picking on Ulysses S. Grant. The hero of the Civil War now gets a bad rap, despite his massive popularity in his own time. Although his administration had some major blemishes, our collective memory has been heavily tarnished by longstanding nostalgia for the Confederacy embedded in high-school history teaching.

It’s true, certainly, that Grant had some serious ethical scandals on his watch, though he was apparently not complicit himself in any of them. But much of the modern electorate grew up hearing stories of the Grant years -- 1869 to 1877 -- as the reign of terror of the "carpetbaggers" and "scalawags," when government, especially in the South, was dysfunctional and systemically corrupt. I went to a liberal Quaker high school in the North quite recently, and even I encountered this. It is, quite simply, the white supremacist argument against Grant. "Carpetbaggers" and "scalawags" are just pro-Confederate slurs against a government that, under Grant and the Republicans, was interested in the project of racial equality in the South. The end of Grant’s term coincided with the abandonment of that project, and the destruction of his reputation was very much a purposeful strategy of advocates of the southern "Lost Cause."

This isn’t to say that McHenry is secretly longing to break apart the Union and refight the battle of Gettysburg. Most likely, the guy just doesn’t know anything about the recent or distant past. This is exactly the kind of crowd-pleasing ignorance he's peddled through his whole career, and it’ll be neatly symbolic of the state of the GOP if it catches on. (He's not the first: Rep. Mark Souder, R-Ind., tried a few years ago to put Reagan on the dime, and had to be told off by Nancy Reagan.)

If McHenry is any indication, the resurgence of the party’s electoral prospects hasn’t brought with it some wealth of new ideas. It’s still just knee-jerk, content-free Reagan-fandom, alongside the casual belittlement of black Americans’ historic struggle for equality and freedom. These guys are definitely ready for power again.