"Real Housewives": A battle of the brands 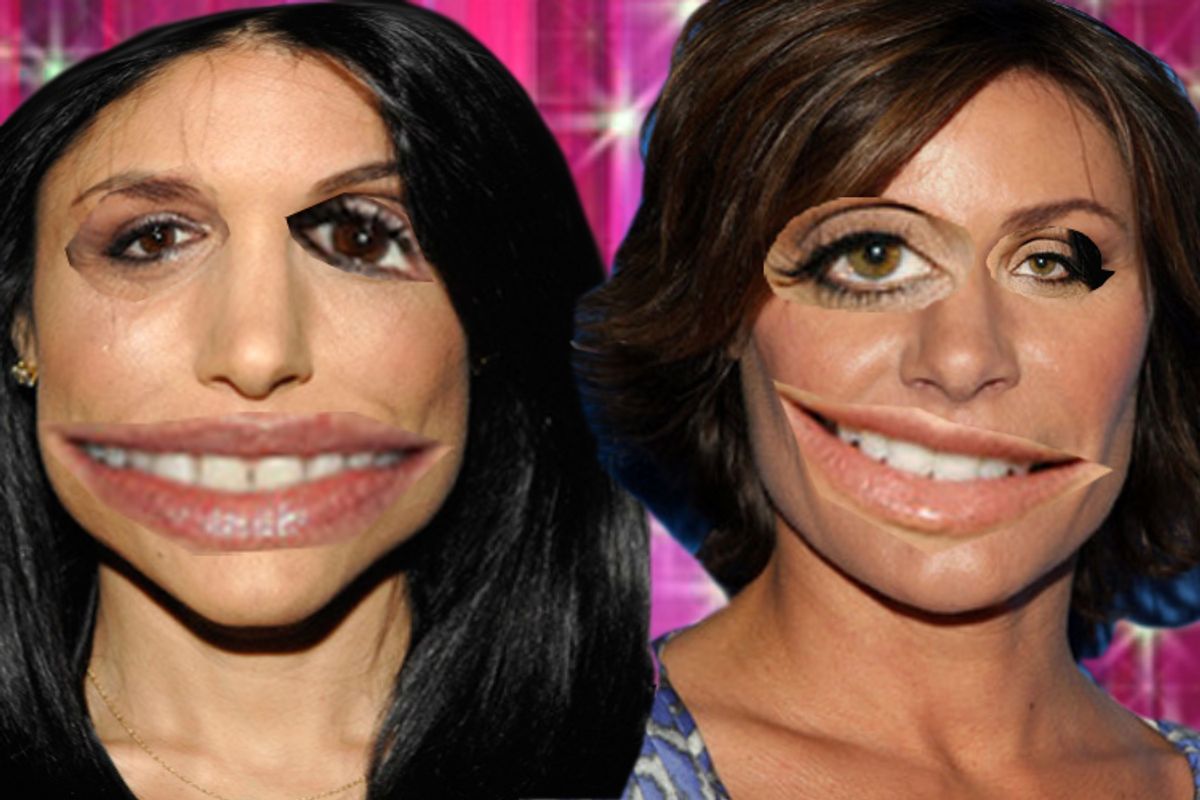 Reality TV has evolved. In the early days, there were drunk, whoring sea donkeys, and lumpy people boiling rice on the beach. Then came the shouting matches, the name-calling, the blunt weapons, the "Flavor of Loves" and "Tool Academys," those trashiest of trashy nail-slashing, hair-pulling, hands-off-my-man dramedies.

Don't get too sidetracked by such distractions, though, because over on Bravo, six women with great shoes, fragile identities and blurry ego boundaries are taking the genre to a whole new level of postmodern, high-capitalist sophistication. If you ask the ladies of "The Real Housewives of New York City" (premieres 11 p.m. Thursday, March 4, on Bravo), of course, they don't have a lot in common, but to the outsider's eye, they share an uncanny inability to distinguish their own needs and desires from their promotional aims or to separate their personalities from their brands. As a result, "friendships" between the women are currently viewed primarily through the lens of determining which strategic alliances might best facilitate their individual attempts at self-branding. Is Ramona throwing a party on her yacht, or just hawking her new jewelry line? Is LuAnn really hurt by Ramona's husband, Mario, calling her "Count-less" (in the wake of recently having been thrown over for a younger woman by her husband, the Count) or is she enriching her brand by conjuring up a little empathy-inducing back story? Who can really say?

While most viewers might tend to look at this subtext, burgeoning in the show's third season, as proof that "the whole thing is fake," such a perspective fails to acknowledge the many complex layers of said "fakeness," which amount to carefully considered marketing choices informed by an unseen wealth of data ("Am I the 'angry' one, the 'innocent' one, or the 'straight-talking' one? Should I appear confused and hurt or above it all? Which emotional response best matches my multi-tiered international product line?").

And let's not pretend such fakeness-as-elaborate-brand-building is confined to the most media-savvy, semi-hysterical circles of big city blowhards and publicity whore hounds and ankle-grabbing shape-shifters. We find ourselves, against our own wishes, thrust into a rapidly changing, increasingly self-promotional universe. To ignore the simple fact that branding is job one for everyone from corporate marketing types to your average, work-from-home freelance something-or-other is to cavalierly wave off the zeitgeist. Even the fully employed have one eyeball glued to self-promotion at all times, whether that means keeping their online résumés up-to-date, just in case, or tracking down and tagging every last human they've ever met in the course of a lifetime and forcing them to be a "friend" -- aka part of their personal target demographic -- on Facebook. In this crappy economy, in the modern age of digital alliances, self-branding is the new showering regularly: It's not just for hardcore douche bags anymore.

Thus, when you witness "real housewife" LuAnn de Lesseps trying to navigate a simple drink at a bar in the Hamptons with fellow "housewife" Bethenny Frankel, the layers of self-conscious opportunism and strategic positioning and recalibrating and careful flanking maneuvers are simply breathtaking.

LuAnn: How can I be your friend if I feel like every time I walk out the door you're going to say something mean? I'm not the only one who feels this way.

Bethenny: LuAnn, listen. We're not great friends, let's not sugarcoat this. I don't want to be great friends.

LuAnn: I thought you were my friend.

Bethenny: Well, we're not great friends. We haven't seen each other for months.

LuAnn: Yeah, I know, you haven't been there for me and my whole life fell apart.

Bethenny: I sent you a basket, when you first broke up with your husband.

If the conversation sounds a little wistful, don't be fooled. These two women aren't weeping or even making human-like faces as this conversation unfolds; they're scowling and looking at each other suspiciously as if they're in the middle of a particularly tricky game of Texas Hold'em. Yes, here are two smart, well-maintained women, facing each other on bar stools in an empty restaurant in the Hamptons, thinking very, very hard about every word while the cameras roll. There are long pauses, with close-ups on their faces, often smirking ("What are you up to?") or squinting slightly ("She's so inauthentic! But how do I out-inauthenticate her?"). LuAnn can't quite decide whether to play the hurt divorcee or go on the attack in her signature polite, blinking, passive-aggressive, holier-than-thou way. The Polite Attack is quite clearly her personal preference, under these or any other circumstance, but the Hurt Divorcee is obviously the emotional style she and her handlers have chosen for this post-dumping season, since it guarantees her a bankable cachet among the millions of vulnerable divorcees who just read "Eat, Pray, Love" for the 60th time.

What's wonderful to witness, of course, is this postmodern clash of branding needs against actual emotional needs. Bethenny, she of "Skinny Girl" cookbooks and "Skinny Girl Margarita" fame, struggles less with this problem, of course, since she rather conveniently seems to have lost touch with heartfelt human emotions quite a long time ago. Except for occasional emergency types of situations and low-blood-sugar moments, we are to assume that Bethenny will maintain a high gloss of "over it, been there, done that, whatever" detachment, paired with a real knack for razor-sharp witty voice-over'ed nastiness and shrugging "I'm not with stupid" distancing. And that's nice, because that's exactly what her adoring fans want her brand to deliver, week after week. That, and margaritas you can get fall-down-drunk on without having an ass the size of a Mini Cooper.

What's even better, of course, is that moment where LuAnn deduces that the only proper way for a newly divorced Miss Manners type of guru to wrap up such an ugly exchange is to hug Bethenny warmly, force her to clink her glass to yours and let bygones be bygones. This disturbs Bethenny visibly, but she's caught in a trap: How can she refuse a hug and a clinkedy-clink without appearing "cold," which is something numerous marketing consultants and publicity experts have doubtlessly informed her presents a major threat to her worldwide distribution model? But when she gives in and hugs, her face says it all: What damage might this do to my reputation for never bullshitting anyone? LuAnn smiles sweetly. She can see that she has Bethenny in a tight spot, and it makes her eyes blink just a beat faster and more condescendingly.

Needless to say, the joys of the premiere of "The Real Housewives of New York City" are without number, from Bethenny and Jill's big breakup (caused by Bethenny telling Jill after one too many phone calls, "You need to find a hobby"), to Kelly's big chance to gang up on Bethenny with the others ("That girl, she has issues. She invented the margarita," Kelly snips in an unusually clever moment one can't help but imagine has been pre-scripted by a freelance joke writer). The whole delicious circus shifts into high gear almost immediately when Ramona invites everyone to a yacht party, breaks out her jewelry, refuses to apologize for Mario's mean words to LuAnn, weeps openly and calls Jill and LuAnn "the mean girls," then invites the mean girls back in around the table to toss back some shots like old buddies. Later, Bethenny flashes her tits, shows off her new boyfriend, acts busy and important (with the help of a laptop-toting assistant), then takes pot shots at her former BFF Jill ("When I hosted the 'Today' show? When I got there they said Jill called up there, saying 'Why wasn't it me?'").

Meanwhile, former smug married LuAnn plays "the hurt divorcee," former smug wacko Alex plays "the sane one," and former ringleader and occasional troublemaker Jill plays the one who really, truly believed she was nurturing lifelong friendships here (while selling fabulous fabric, natch), but the big, scary, mean world of nasty opportunists with ulterior motives cruelly disabused her of that notion.

All of which are highly marketable branding strategies for a rapidly changing global marketplace! See you next week, Real Brand Managers of New York City!