CEO Pandit tries to lay a snow job on "the American people." They're not going to buy it 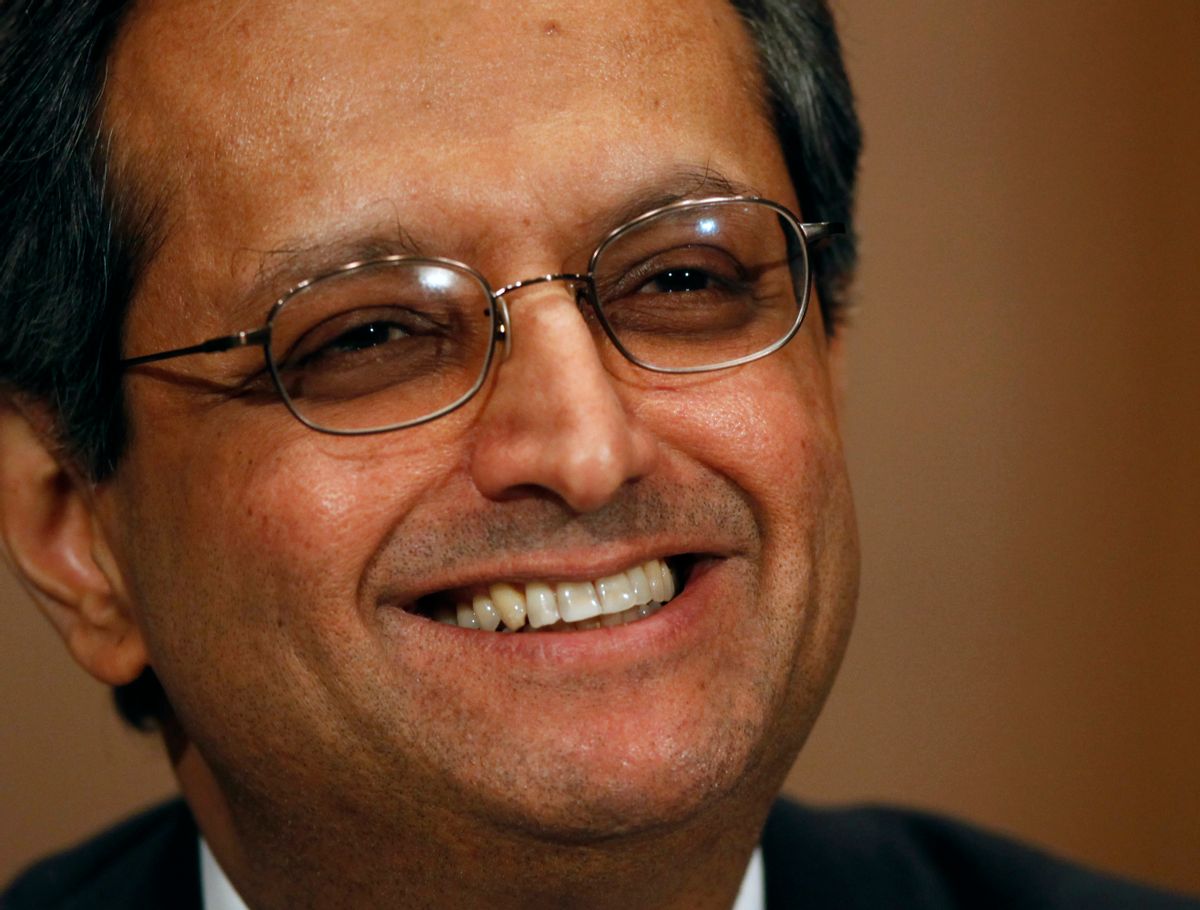 When Vikram Pandit talks, the CEO of Citigroup periodically flashes a quick smile that is anything but friendly. It's the smile of someone who knows he's laying down a line of bullshit, but seeks to disarm the suspicion of his interlocutors with a false front of bonhomie.

As I write these words, Elizabeth Warren, chairwoman of the Congressional Oversight Panel investigating the TARP program, is grilling Pandit on a series of uncomfortable issues and Pandit's smile is flashing on and off like a strobe light. Warren notes that a predecessor of Pandit's, John Reed, has now come around to the view that Citigroup needs to be broken up. She asks him if he agrees. He smiles.

"I'd have to go back and look at what he said." Smile. "I've been pretty busy," (smile) "running the company." Smile.

Judging by Warren's frown, Pandit's smiles were anything but mollifying. After being saved from collapse by $45 billion of taxpayer money and numerous other extraordinary government actions, Citigroup needs to do a little bit more than assume an obviously insincere pleasant demeanor to make amends.

In his prepared testimony, Pandit made haste to kiss up to the American people:

First, however, I want to thank our Government for providing Citi with TARP funds. For Citi, as for many other institutions, this investment built a bridge over the crisis to a sound footing on the other side, and it came from the American people... American taxpayers still hold 27 percent of Citi's common stock, and we look forward to helping them realize value on that investment. Citi owes a large debt of gratitude to American taxpayers.

With that exercise in mild self-abasement in mind, let's look at some other Citi-related news this morning.

In Hawaii, state officials are upset with Citigroup after losing about $250 million on investments in securities brokered by the investment bank.

They're mad because Citigroup had pitched the "auction-rate securities" as a higher-yielding, highly liquid, but still safe, alternative to money market funds.

Auction-rate securities reset their interest rates frequently via periodic auctions, sometimes as often as every seven days. The idea is that if interest rates head in the wrong direction, or if you need speedy access to your cash, you can get out quickly. But during the great financial crisis, the entire market collapsed -- the brokers, such as Citigroup, who kept the auctions going were no longer willing to bid. So, as it turned out, they weren't as safe as money market funds after all. In 2008, the SEC reached a settlement in which Citigroup and other investment banks forked over billions of dollars to individual investors who'd been burned, but many institutional investors are still out in the cold.

The initial paragraph of the SEC's 2008 complaint against Citigroup spells out the beef:

This is a case in which the Defendant misled tens of thousands of its customers regarding the fundamental nature and increasing risks associated with auction rate securities that Citi underwrote, marketed and sold. Through its financial advisers, sales personnel, and marketing materials, Citi misrepresented to customers that ARS were safe, highly liquid investments comparable to money market instruments. As a result, numerous customers invested in ARS funds they needed to have available on a short-term basis.

According to Bloomberg, the Hawaii deal happened when Citigroup knew the market was already in trouble.

The transactions came while Citigroup was increasing brokerage commissions and traders were being told to "make sure all hands are on deck" and "do whatever is necessary" to dispose of auction-rate bonds as the $330 billion market began to fail.

Also of interest, via a tweet from Felix Salmon, is a document authored by some Citigroup employees defending the practice of taking out credit default swaps against sovereign debt. This is a hot topic right now in Europe, where there is a widespread perception that speculators are using CDS to make speculative bets against the credit of countries currently facing severe budgetary problems. As the writer of the document concedes, "The media image of 'greedy speculators' pushing a country to default, with taxpayers left to foot the bill, is a powerful one."

But the most extraordinary aspect to the document is its title, "You Can't Blame the Mirror for Your Ugly Face."

Taken from a passage in Nikolai Gogol's "The Government Inspector," the citation, says Citigroup, says "to us the negative focus on CDS has more to do with government's reluctance to face their own problems than it has to do with reality."

In other words, don't blame us for trying to cash in your incompetence. If you weren't incompetent, there'd be no problem!

Perhaps, to some extent, there may be some truth to this point of view. There are widely varying perspectives on the economic utility of credit default swaps. But putting aside the validity of the argument, not to mention the admirable erudition displayed by the Citigroup authors, one just has to goggle at the embedded arrogance on display.

Why is there so much negative focus on CDS? Because the world has just watched in horror as banks such as Citigroup embarked on a frenzy of credit default swap speculation so irresponsible that it played a critical role in crashing the global economy. No employee of Citigroup has the right to lecture anyone else on their inability to recognize what is staring out at them from the mirror.