The Obama administration wants us to "look past" the February labor report. That's not going to happen 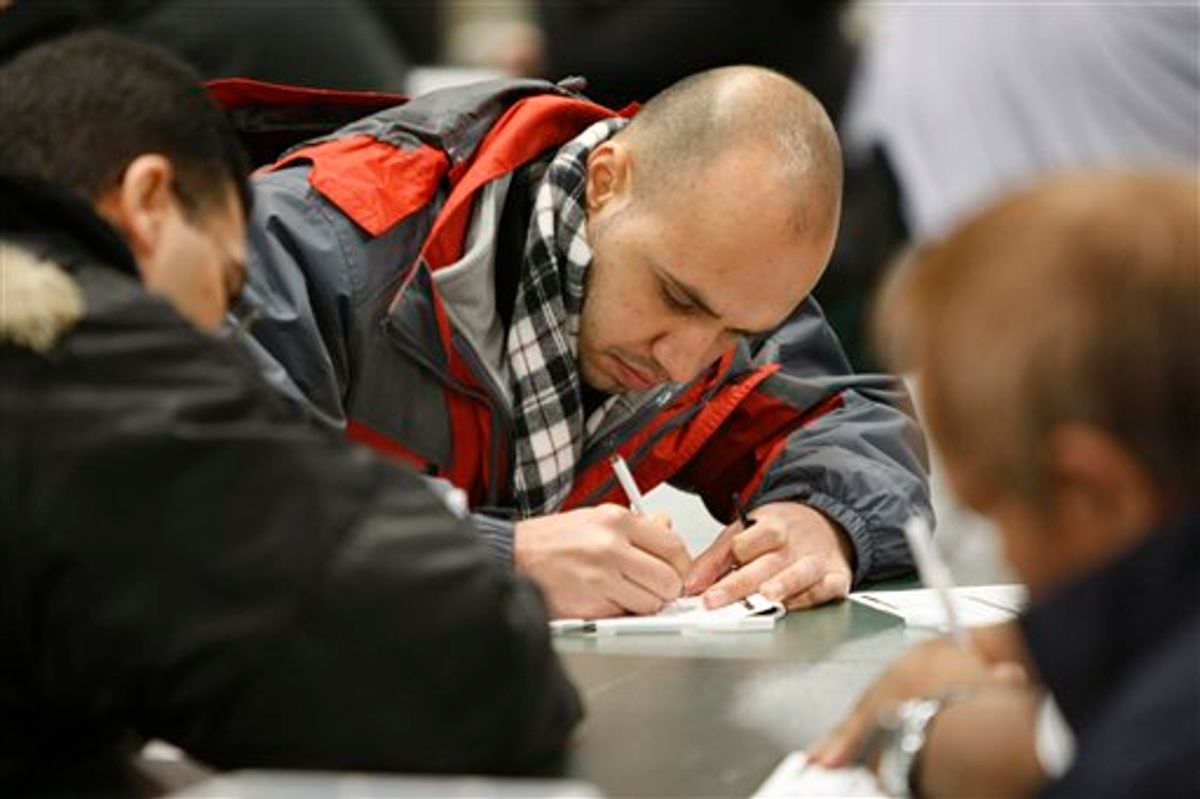 In this photo made Sunday, Jan. 23, 2010, job applicants fill out forms at a job fair in Santa Clara, Calif. The number of new claims for unemployment benefits fell less than expected last week, fresh evidence the job market remains a weak spot in the economic recovery.(AP Photo/Paul Sakuma) (AP)
--

The U.S. economy, reports the Bureau of Labor Statistics, shed 36,000 jobs in February. The unemployment rate held steady at 9.7 percent.

Let the analysis begin! Two weeks ago, New York Times business columnist told us to to get ready for a "horrid" job number. Blizzards rampaged through the northeast during the precise week in which the BLS conducted  its payroll survey, which was supposed to imply a sharp temporary downward jolt to the unemployment numbers. Larry Summers chimed in over the weekend, urging us to "look past" the February numbers, and noting that in the past, bad weather had added as much as 100-200,000 lost jobs to the tally.

So taking Snowpocalypse into account, a mere 36,000 jobs lost is just a trifle, right?

Not exactly. The BLS reports that for a job to be counted as gone, a worker must not have received even one hour of pay during an entire period. Roughly half the workers in the payroll survey had at least a two-week pay period, meaning that they would have had to be sidelined for a lot longer than the blizzard lasted to get counted. So 36,000 jobs lost might be  a reasonably accurate number, in which case it's worse than January's (revised) 26,000 drop, and nothing to feel good about, at all.

Other news from the report: Construction employment fell by 64,000, mostly concentrated in commercial real estate, which is no surprise, since the commercial real estate sector is in big trouble. Temporary help services rose 48,000 -- which is either a sign that employers will eventually start adding real jobs, or that we have moved permanently into a new temp worker era. Hiring for the census added 15,000 workers, but overall federal government unemployment only rose slightly, due to a decline in U.S. Postal Service Unemployment.

The ever popular "U-6" measure of employment, which adds "all persons marginally attached to the labor force, plus total employed part time for economic reasons" to the regular total, edged up to 16.8 percent, reversing a couple of months in which it had started to glide down.